How a Trade War Becomes a World War

Paul Greenberg
|
Posted: Apr 13, 2018 12:01 AM
Share   Tweet
The opinions expressed by columnists are their own and do not necessarily represent the views of Townhall.com. 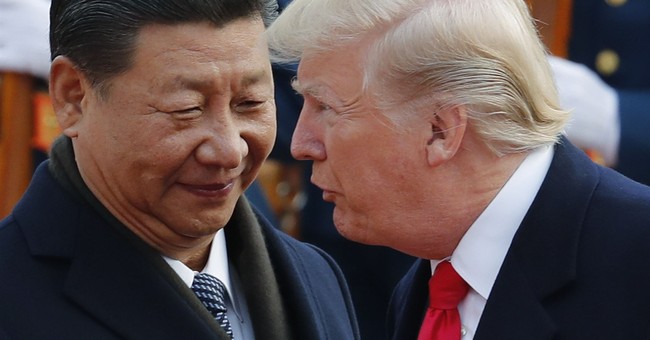 Both sides in the developing trade war between Beijing and Washington are heating up their rhetoric in preparation for a climactic showdown that can only wound both sides as it continues. Our president and agitator-in-chief is still tweeting like mad, as in this bellicose bulletin: "The United States hasn't had a Trade Surplus with China in 40 years. They must end unfair trade, take down barriers and charge only Reciprocal Tariffs. The U.S. is losing $500 Billion a year, and has been losing Billions of Dollars for decades. Cannot continue!"

For its part, a spokesman for still nominally Communist China says Beijing doesn't want a trade war, but is fully prepared to wage one if need be. "If the U.S. side announces the list of products for $100 billion in tariffs, the Chinese side has fully prepared and will without hesitation counter-attack with great strength."

This kind of tit-for-tat can't profit either side in the long or even short run. It's time to blow the whistle on this game of chicken between great powers and great markets for each other's goods and services. And start negotiating in good faith with the aim of a peaceful settlement instead of more bluff and bluster.

The rest of the world is waiting and watching these two great commercial as well as military powers square off, knowing full well that only innocent bystanders will be hurt. Who needs to be caught in this crossfire? Meanwhile, even the agitators have developed their own corps of agitators who are only too willing to hold the combatants' coats as this war of words goes rolling along, picking up a momentum of its own at every dangerous curve despite the risk of being swept off the rails.

"They aren't going to bully (Donald Trump) into backing down," says Stephen Moore, who used to advise the Trump presidential campaign and is now a visiting fellow at the Heritage Foundation. Still talking tough, he says those in charge of setting Communist China's trade policy "are going to have to make concessions -- period." Which is scarcely the most constructive attitude to take if a peaceful conclusion that benefits all is the long-term or even short term goal of these negotiations.

Why not aim for a happier ending to this story instead of exacerbating an already tense tug-of-trade-war? Ideally, it should cost no more to leave everybody smiling instead of glowering at each other. Here's hoping a new era of good feelings will descend on Earth that'll clear the air instead of filling it with more acrimony. Hasn't humankind had enough ill will? Let wiser counsel now prevail.

A couple of vice presidents of the European Commission say they can help this fast burgeoning trade dispute. Jyrki Katainen and Valdis Dombrovskis have offered their services as go-betweens, having no ax of their own to grind in this trade war but instead a sensible determination to stay out of it. Good for them. Peace needs all the support it can garner in these contentious times. Or, for that matter, in any other. Blessed are the peacemakers, for they shall see the beginning of a far better world. On a note of hope, let's trust these words are taken to heart. Because nobody wins a trade war, and this one needs to be snuffed out before it goes any further.