Let's Hear It for Tyranny!

Paul Greenberg
|
Posted: Mar 22, 2018 5:00 PM
Share   Tweet
The opinions expressed by columnists are their own and do not necessarily represent the views of Townhall.com. 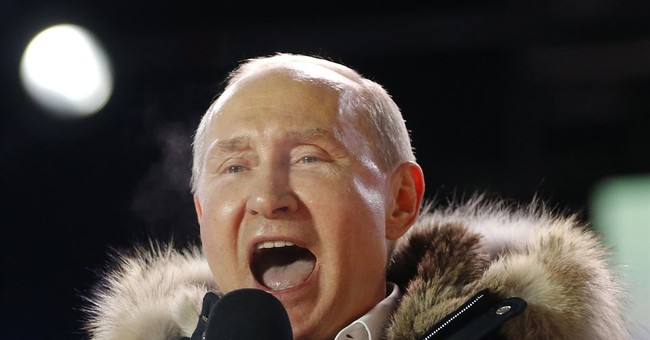 Now that he is in effect Russia's president for life, Vladimir Vladimirovich Putin has ordered another big win for himself at the polls. This time he was awarded 76.7 percent of the vote at last rigged count. He just picks a number, a number to his liking, and sure enough the official tally will echo it down to the decimal point. (Hey, seven is a lucky number! Let's use a couple of them!) It's like the terrible old days when all-wise, all-knowing Uncle Joe was in charge of stuffing the ballot boxes across all of Russia's time zones, and never failed to deliver anything but a resounding electoral victory for himself.

Comrade Putin was so sure of a victory this year that he didn't allow his No. 1 opponent on the ballot. Or should that be, he didn't allow his No. 1 opponent on the ballot, so he was certain of victory? Alexei Navalny, the leader of the opposition in Mother Russia, wasn't allowed to run. But look at it from Vladimir Putin's point of view: Why risk less than 76.7 percent? Some democracy they have in Russia, where the president/dictator/poll watcher gets to tell the opposition what names can go before the voters. Or as the communists in China used to say, and maybe still do, how good can an election be if the wrong side wins?

Mayor Daley the First, who was so popular that even the dead were recorded as voting for him, was a piker compared to the current Tsar of all the Russias. Here in these only sporadically United States of America, local and state political machines may erode the body politic like some slowly encroaching cancer. But in the home of Russian autocracy, whether that of tsar or commissar, a whole culture and civilization may be wiped out at the whim of its brutal masters. Again and again. It might pay to examine the roots of so vast and regularly repealed a cataclysm in search of its cause and, perhaps one golden day, its cure.

The Russian poetess Nadezhda Mandelstam saw that "the basic error of our times" was to replace "the idea of popular education" with "the political concept of indoctrination." And so the priceless riches of culture and tradition were deliberately spurned and forgotten, and the religion of Progressive ideology, "the idea ... that people can foresee the future, change the course of history and make it rational" was dubbed a science. Meanwhile, as Jacob Howland puts it in the March issue of New Criterion, "actual sciences like biology and linguistics -- to say nothing of softer disciplines like history and sociology -- were infected with ideology; dedicated scholars who refused to embrace crackpot theories lost their careers and sometimes their lives. A 'language of state' came into being; words shifted in meaning, and fundamental distinctions were effaced. This new, debased, and coarsened speech was diligently policed for doctrinal correctness. 'Coldly calculated versification,' promoting officially approved lessons and attitudes, replaced 'true poetry.' "

This whole process became known, in pseudo-Marxist ideology, as giving history a push in the politically correct direction. For dreadful example, just look and see what is happening on too many college campuses in this country. Mandelstam wept bitter tears over what was being done to her country and indeed her whole national heritage, but she refused to stop fighting. The cultural vandals were ransacking what had made Russia great, from her literature to her very spirit. But before Mandelstam had to descend into the silence of the grave, she did leave us this warning and prophecy:

"Nothing can be predicted with certainty: people could even forget how to read altogether and books molder away to dust. We might even stop talking with each other and communicate only by emitting call signs or bloodcurdling war cries. Sometimes I think this is what we are coming to. We did, after all, learn to speak in a lying code language designed to conceal our real thoughts. One's descendants pay for such things by losing the power of articulate speech altogether, caterwauling instead like fans at a football game."

God forgive those who have brought Mother Russia to such an ugly pass. But lest we forget, God's nature is to forgive. We mere mortals, however, can forgive these crimes against past and future. But can we ever forgive ourselves for allowing such things to happen? Let's hope so. For where there is forgiveness, there is hope for a brighter and braver future -- for the Russians and for all the world.