Paul Greenberg
|
Posted: May 12, 2016 12:01 AM
Share   Tweet
The opinions expressed by columnists are their own and do not necessarily represent the views of Townhall.com. 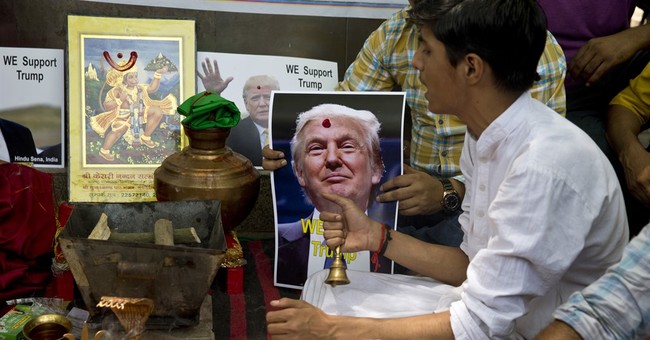 Asked about the greatest challenges facing American society, my response used to be glib enough: It all boiled down to the same three factors that determined the value of any piece of real estate. They were, in order of importance: location, location and location. But I'm not so sure any more. About anything.

The great challenge now is no longer finding problems but selecting them, there are so many. They must multiply during the night, there are so many to choose from. You name it, it's a problem, or at least a pet peeve: from the absence of indices from recently published books to the modern plague of what's called multi-tasking. The language used to describe it is enough to make you cry. Or laugh out loud.

As a sign above an old, collapsing general store in Belzoni, Miss., succinctly summed up its entire inventory: Sno-cones, fireworks and gravestones. Talk about cradle-to-grave coverage, we might as well be talking about Obamacare.

The last refuge of real language may be a couple of African-American youth doing the dirty dozens on the sidewalk outside a storefront on Texas Avenue in Shreveport, La. They may not have any Shakespeare, but at least they're trying to make sense of the all too real world around them, not to mention the one to come. But there is no longer a moral center to hold onto as we slouch toward Bethlehem to be born again. Our own powers fail us, and no other avails us. Or can even be imagined.

If there is a name for this sickness, it is spiritual anemia. Denied the blood and body of salvation, it dissolves, folding back on itself till it disappears into the void. As with art or music, the great challenge it presents is not to be all-inclusive but selective.

The stars in their heavenly course ask no questions. They do not make oracular pronouncements, yet day by day uttereth knowledge and night by night speaketh wisdom. They have no need of words, only an endless silence. In place of a sane mind in a sound body, we have adopted some kind of homeopathic pseudoscientific medicine as our ideal, and it is making us sicker than ever.

But at every juncture of our tangled history, some know-it-all who's really a know-nothing can be counted on to rise up and proclaim a one-size-fits-all, comprehensive explanation of everything. For a splendid example of that sad phenomenon, see Richard Hofstadter's "The Paranoid Style in American Politics." Only it isn't just a style anymore; it's genuine paranoia, for even paranoids have all too real enemies. Just take a look at this year's sad-beyond-words crazy quilt race for the American presidency. By now it doesn't call for political but psychiatric examination.

Just listen to the all too imitable Donald Trump campaigning for the American presidency. Is that a politician carrying on, or a medical patient flitting from delusion to delusion? One day he calls Muslims a clear and present danger who need to be shipped back to where they came from, the next he's cozying up to them, proclaiming himself a great statesman who seeks only stability at home and peace abroad. What's to be made of him? Little if anything that makes sense. "Make America great again!" he demands, as if she ever ceased to be great. Is this a political candidate or a wind-up toy that only repeats the same applause lines when you pull his string? The man seems only marginally connected to anything that could be called reality. Yet he's starring at political rallies instead of being safely locked away.

And what is to be made of Hillary Rodham Clinton, the Democratic candidate for president-in-waiting? At least she fits a familiar pattern in American politics, that of the ambitious politician who'll say and do anything to get elected. Our political history is full of 'em, from Aaron Burr to Henry Clay, and now we have Miss Hillary promising to take things away from you on behalf of the common good. And claiming that corporations and businesses don't create jobs, which is something only an all-powerful, all-knowing government can do. Or as she puts it, "I can't worry about every under-capitalized business." And this gem of Clintonesque wisdom: "There are rich people everywhere and yet they do not contribute to the growth of their own countries...."

Who knew? "No. We just can't trust the American people to make those types of choices. ... Government has to make those choices for people." Welcome to democracy Clinton-style, which doesn't differ all that much from good old-fashioned fascism. Like any good dictator, she doesn't even drive her own car, at least not since circa 1996. Hail Caesar! Huey is often credited with saying that, if fascism comes to this country, it'll be on a program of Americanism.