Music of the Night 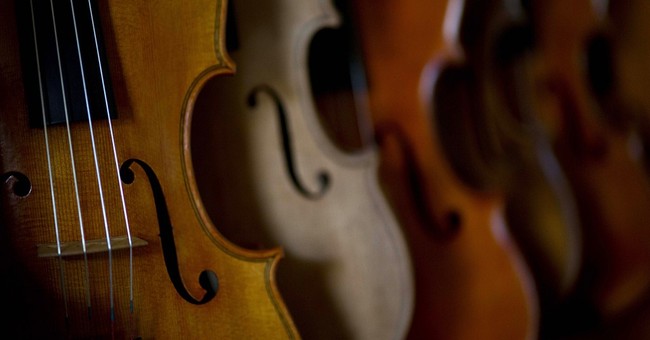 Just in time, as this season of ill will known as an American political campaign reaches its vitriolic height, comes a pause in all the tumult. It's another evening of chamber music at the Clinton Library here in Little Rock, a welcome break in the day's preoccupations, a throwback in time, a touch of the 18th-century world of chivalry and gesture, manners and even noblesse oblige. For to those who were given much, much was still expected. And should have been.

Again is heard the music of that lost world before the French Revolution had set the barbarous pattern for all the revolutions to follow -- from Communist to Nazi, or just revolutions for their own bloody sake. We are now all heirs of the all-too-modern world Edmund Burke could see coming, and warned against in his prescient "Reflections on the Revolution in France":

"But the age of chivalry is gone. That of sophisters, economists, and calculators has succeeded, and the glory of Europe is extinguished forever. Never, never more shall we behold that generous loyalty to rank and sex, that proud submission, that dignified obedience, that subordination of the heart, which kept alive, even in servitude itself, the spirit of an exalted freedom. The unbought grace of life, the cheap defence of nations, the nurse of manly sentiment and heroic enterprise, is gone! It is gone, that sensibility of principle, that chastity of honor, which felt a stain like a wound, which inspired courage whilst it mitigated ferocity, which ennobled whatever it touched, and under which vice itself lost half its evil, by losing all its grossness."

No, Burke's was not a world without needless, brutal violence. But it was not a world in which violence for its own sake was celebrated, either, as in punk rock. It was certainly not a world in which an omnipresent little box in every household poured forth assaults on taste and civility with every attack ad, a world in which we dare not open the day's mail without first taking a deep breath -- to steel ourselves against the next political onslaught. And not just the kind of attacks delivered by those candidates we despise, but from those we support. It's embarrassing.

Then, in the midst of this sordid season, there arrives ... Papa Haydn, as a young admirer named Mozart called him, as did all the young musicians the old man had taught, guided and generally shepherded at the Esterhazy court. Tonight, thanks to the saving Rockefeller Quartet of the Arkansas Symphony, the maestro is brought to life again, his glowing yet calming notes casting their old charm anew in a world he never made, and one a man of his taste and grace would never have made.

For a saving instant, all the political bother and bubble outside the little concert hall at the Clinton Library -- called the Great Hall, of course, in the pretentious spirit of the times -- comes to a merciful stop. A welcome surcease is declared. Beginning with the very first notes of Haydn's string quartet in F-sharp minor.

Peace descends. And ascends. More than peace: sublimity. The first movement is played in accordance with the composer's instruction: Allegro spiritoso. With spirit. Haydn's spirit. He lives and, for too short a time, so does his string quartet. And we are renewed, returned to health. Do not be conformed to this world but be transformed by the renewal of your mind. And spirit. As in allegro spiritoso. Papa Haydn's music has somehow managed to remain, centuries later, both stately and forever state-of-the-art.

Up and down the scales that first, spirited movement goes, yet somehow always upward. Into the light. Mehr licht! More light! Legend has it that those were Goethe's last words. They could have been Haydn's lifelong motif. Always more spirited, more allegro, till at the end comes that moment of Joy! And unutterable sweetness. And this is but the beginning, the first beautiful, classically crafted movement of a work of art.

How well his noble patron liked this particular string quartet of Haydn's may not be known, but it scarcely matters. For in the end it was written for a different audience: posterity. And for Haydn himself, whose taste was always developing (More light!) and who found himself free to indulge in it at the relatively isolated Esterhazy court, where he was kapellmeister indeed. Not just master of the orchestra but of himself.

Or as he would recall in a memoir: "I could, as head of an orchestra, make experiments, observe what created an impression and what weakened it, thus improving, adding to, cutting away, and running risks. I was cut off from the world. There was no one in my vicinity to make me unsure of myself or to persecute me, and so I had to become original." And so he did.

P.S. to the occasional young reporter out in the state who asks me how he can catch on at the bigger paper in the state capital, or maybe in New York or Chicago or oh-so-sophisticated points beyond:

Son, you don't know how lucky you are to be in a small town, a whole society in microcosm with all its own eccentricities and idiosyncrasies. Especially in a region of the country that is still a region, not just part of a modernized, homogenized, televised and globalized whole. The kind of thought-free, taste-free society reflected in all those unending attack ads blaring out at us all the day long. Like a siren that refuses to stop.

These few precious moments from a still not entirely lost past come like salvation. Consider this a message to that lost past: Thank you, Papa Haydn.

Oh, yes, there's also a piece of music moderne on the program, and the spell is broken. Let's just say it ain't "Kind of Blue" by Miles Davis and John Coltrane, or even Gershwin's Charleston sound in "Porgy and Bess." Fortified by a glass of red at intermission, I'm able to take this Quartet for the End of Time (a title as pretentious as modernity) for a few minutes and a few jingly notes before sneaking out as quietly as possible.

It's a relief to make it to the blessed silence of the parking lot, and look up, soaking in the silence, the music of the night.