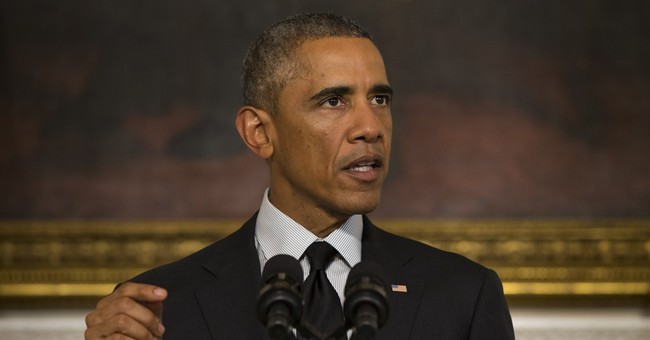 No, it's not the full moon, that's an election rising on the horizon. Lock your doors. As the witching hour approaches, the paranoids start coming out of the woods on the lookout for easy prey, so we can all be afraid, be terribly afraid, together. In uncertain times -- but I repeat myself, for when have the times ever been certain? -- a new crop of true believers is waiting to be cultivated by the kind of demagogues who always have the simplest explanation for any and all of the uncertainties out there:

Election time is when conspiracy theorists come into their own, and the more exotic their theory, the more they flourish. 'Tis the season when just an ordinary year-round conspiracy theory can blossom into a full-blown mythology. And what the historian Richard Hofstadter called "The Paranoid Style in American Politics" comes back, the way sweaters start appearing in the fall.

You can tell the midterm elections are upon us when certain telltale phrases begin appearing in letters to the editor -- like "Barack Hussein Obama," and we're all supposed to get the message. The president's middle name may almost disappear the rest of the year, but come election time it serves as a signal to start frothing at the mouth. For its imputation is unmistakable: Our president -- our president! -- is a Muslim conspirator, or at least an enemy agent.

You know, the way the Truthers revealed that it was really the CIA that had brought down the Twin Towers. ("The World Trade Center didn't just blow itself up!") And the Koch Brothers are behind an immense right-wing conspiracy to lie, cheat and generally degrade American politics. Happy Halloween!

Not even the rich and famous are immune to the political virus going around this time of year. Think of poor Dan Rather, who used to be taken seriously as an anchorman on the evening news. Till he was taken in by the story that George W. Bush -- our president and commander-in-chief! -- had been some kind of draft-dodger. And then tried to sell that theory to the rest of us, which would prove his undoing.

It's when the world seems darkest, and Americans are most divided and fearful, that paranoia swells -- like some night-blooming poisonous plant. How else explain the rise of a demagogue like Joe McCarthy in the Furious Fifties, with his ever-shifting "exposés" of a Communist conspiracy in high places? There actually was one, but it tended to get lost amidst the sound and fury of Tail-Gunner Joe's rapid-fire accusations and hallucinations. While the eloquent voices of serious anti-Communists like Whittaker Chambers tended to get lost in all the fireworks.

Chambers, an old man by then, tried to warn a brash young editor named William F. Buckley Jr., who was writing in defense of Sen. McCarthy's tactics at the time. "All of us would like to be his partisans," he told Buckley, "if only because all are engaged in the same war. As it is, most of us make an effort to overlook certain matters or to give (Sen. McCarthy) the benefit of most doubts. But, all of us, to one degree or another, have slowly come to question his judgment and to fear acutely that his flair for the sensational, his inaccuracies and distortions, his tendency to sacrifice the greater objective for the momentary effect, will lead him and us into trouble. In fact, it is no exaggeration to say that we live in terror that Sen. McCarthy will one day make some irreparable blunder which will play directly into the hands of our common enemy and discredit the whole anti-Communist effort for a long time to come."

That's just what happened in the Army-McCarthy hearings, which would prove McCarthy's downfall. The whole country could turn on its television sets every afternoon and watch the senator in snarling action, bullying witnesses and making the most outrageous charges against perfectly respectable, long-time public servants -- and be repelled by his low tactics. McCarthyism would become the bane of the anti-Communist cause for years. It was left to Whittaker Chambers to pronounce the definitive judgment on the senator's politics: He "did the Right more mischief than he ever did the Left."

The junior senator from Wisconsin was only one demagogue in a long line of them that continues to this day. He would be followed by the likes of Robert Welch, founder of both a successful candy company (Sugar Daddy, Junior Mints) and a line of confections not nearly as sweet peddled by the John Birch Society and conspiracy-theory factory. Mr. Welch tried to sell the line that Dwight Eisenhower of all American presidents was a "dedicated, conscious agent" of the Communist conspiracy. And so were the old-establishment types around him like the Dulles brothers, John Foster and Allen.

How respond to such a strange mix of the silly and outrageous? It was left to conservative scholar and author Russell Kirk, he of "The Conservative Mind" and "The Politics of Prudence," to make the best riposte to Robert Welch's delusions: "Eisenhower's not a Communist -- he's a golfer."

The paranoid style of American politics tends to make a comeback every election season, when low insinuations start falling like dead leaves. Like this recurrent reference to Barack Hussein Obama, but Obama's not an evil conspirator -- he's a golfer.