The Shutdown Shuts Down 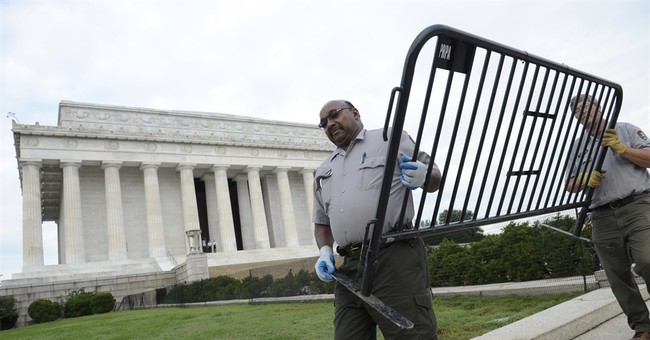 So what have we learned from the (not so) Great Shutdown of 2013?

My best guess: nothing much. Which is pretty much what the country learned from the last great shutdown and face-off. Which was back in the 1990s, which now seems like yesterday. Or rather Thursday, which is when the president finally got to sign a debt-(un)limit bill so everything could get back to dangerously normal.

The debt clock can now keep ticking, the country can shrug off its disgust with both political parties, and we can all go blithely on.

Happy Days are Here Again--for a while. Ain't We Got Fun?

It may not be just a coincidence that the only song lyrics that pop into mind when contemplating this latest failure of both sense and government should come from the Roaring Twenties and Depressed Thirties, which followed one another the way hangovers follow binges.

Yes, yes, but what have we learned from all this?

About as much as a couple of other parties learned from their confrontation as recorded by that eminent historian and political philosopher Mother Goose:

The King of France, with twenty thousand men,

Went up the hill, and then came down again;

The king of Spain, with twenty thousand more,

Climbed the same hill the French had climbed before.

Each no doubt drew his own self-serving lesson from that pointless campaign, to wit: Each was absolutely right while they were being absolutely wrong. Both could rest their their defense on what the Church considers grounds for forgiveness: invincible ignorance. . . .

Democrats, or at least their party's establishment, may have learned only that it pays to be stubborn no matter what it costs the country. Or posterity. The polls (our current sovereign and ultimate arbiter) say their party won, and will win some more come next year's elections. Happy Days Are Here Again.

Republicans, or at least those rebelling against their party establishment, will learn nothing. Which is just what they learned a decade ago when Bill Clinton cleaned their clock and was able to go on to re-election, earning a vote of confidence and impeachment in roughly that order.

The piper didn't have to be paid till the whole bubble burst at the end of the Clinton presidency, and by then it was somebody else's problem. Whee-eee!

For now the less than Grand Old Party may remain as ineducable about the great game of politics as before. Never overestimate the intelligence of Republicans, or underestimate their party's uncanny ability to sabotage itself.

The GOP is faced by a quandary as old as Cassandra's. It's aware of the approaching disaster as the national debt grows still more ominous, but just as aware that all its warnings will be ignored. For the Republicans seem unable to translate the essence of all their facts and figures and graphs and fiscal projections into the kind of plain English that would sway the great beast known to Alexander Hamilton as The People. ("Your people, sir, your people is a great beast.")

But what th' heck, Colonel Hamilton is no longer secretary of the Treasury, which is clear enough, and the band plays on.

There's a name for the modern-day Republican Party's big problem. The scientific term for it, to borrow a line from that noted political scientist Cool Hand Luke, is a failure to communicate. And it is proving a costly failure.

And so we all go on, oars beating against the current that carries us back to just where we were before. To quote an old federalist editor and backyard inventor named Ben Franklin, experience keeps a dear school but fools will learn in no other.

In the meantime, pay no mind to that faint roar you hear in the background. It's only the distant sound of the great cataract awaiting at the end of a long and lazy river.

Sen. Josh Hawley Wants to Know Why Pro-Lifers Are Held to an Unequal Standard by Biden's DOJ
Townhall
What fresh Snell is this? Purported lawyer gets dragged by Twitter for claiming Maggie Haberman likely committed misprision of felony
Twitchy
Brian Kemp Goes for the Jugular as Stacey Abrams' Campaign Continues Its Freefall
Redstate
The Morning Briefing: The Drag Queens Hanging Around Kids Are Skeeving Me Out
PJ Media