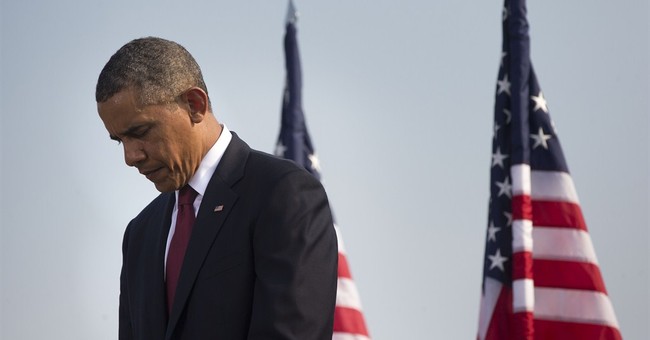 The Sea of Faith

But now I only hear

It would be wrong to say that our president's policy toward the continuing crisis, calamity and crack-up in Syria -- a disaster now rippling out far beyond that country -- has been disappointing. Disappointment implies that something better was expected.

But by this time in Barack Obama's ever diminishing presidency, disappointment has become the norm. Yes, there may be a pause in the inaction from time to time, as in a Greek tragedy, for the chorus to deliver a bitter commentary or touching eulogy for the latest victims. But then this undramatic drama continues to wind down.

Soon the curtain rises for the next inconclusive act and bloody scene. And the bodies are piled higher. There may be exceptions in this administration's record -- occasional success stories when and if those responsible for protecting the country are allowed to do their job -- but those remain the exceptions. In Syria and in general, the killing never seems to end. Each act just seems to run on until the next intermission, when the exhausted audience is told only: To Be Continued.

Does anyone believe in this president any more when it comes to issues of life and death, war and peace? If so, their faith, which may not be easy to differentiate from naivete, is more impressive than convincing.

Just where we are now in this tragic history is hard to tell. Are we entering a war but not a real one, or pausing to give peace a chance but not much of one?

To know where we are headed would mean knowing where we are, and that much nobody seems to know. Certainly not this president, who says he's waiting for the Russian president, or Congress, or the United Nations, or maybe all of the above to tell him.

Are we headed for war or peace or neither? Your guess is as good as mine, maybe better, for it may be unclouded by long attention to this president's record or lack of one. What moves him besides the devout wish to put off any and all decisions? For now all is in abeyance, and may always be.

As a back-bencher named Winston Churchill once described a forever agonizing, appeasing government that included another distinguished figure, Neville Chamberlain, our president seems "decided only to be undecided, resolved to be irresolute, adamant for drift, solid for fluidity, all-powerful to be impotent." Churchill's was a masterful diagnosis of the sickness of his time, for which he was dismissed and derided as a dangerous warmonger.

Change the year from 1936 to 2013. Specifically, to this week. It began with the president and commander-in-chief proposing to strike against Bashar al-Assad's motley forces, if only slightly, and rally American public opinion behind his decision. Which now has been replaced, as usual, by indecision. The message of his speech Tuesday night was that something must be done but maybe not. It all depends on what his friend Vladimir can work out. Who says this president can't delegate? Some days, even some weeks and months and years, it seems that's all he can do: delegate, postpone, put off. Which may be why, if there is a single word that sums up his foreign policy, it may be anti-climactic.

As all surely recognize, this president has a reluctant country to win over to his policy, if he has one. He wouldn't be the first president that Americans had to be persuaded to follow. Knowing that he needed to prepare the country for the coming war, Franklin Roosevelt proceeded step by step, at each stage assuring the country that his aim was to keep the peace.

He was determined to keep America out of war, said FDR, even as he was waging an undeclared naval war against Nazi Germany to protect Great Britain's lifeline to this country, exchanging destroyers for bases, getting Lend-Lease through Congress, cutting off American exports of petroleum and scrap iron to an ever expanding and ever more aggressive Japanese empire, even inaugurating a peacetime draft, and in every other way preparing for the coming storm.

But always he spoke of his devotion to peace, publicly praising the Neutrality Act of 1935 as an "expression of the desire ... to avoid any action which might involve (America) in war." Even as he laid plans to repeal it. And prepare for a war that he, and anyone else who could follow the meaning of the news, had to know was coming.

This president does the opposite. He speaks of war while backing away from it. Call him a Reverse Roosevelt. Until this week, he spoke of waging only limited war but now has limited even that request, asking Congress to postpone any action on his own proposal. And it has hastened to comply, never having been all that enthusiastic about backing him in the first place.

Tuesday night, the president voiced his resentment at those who'd dismissed his military strategy as just a few "pinpricks" that would scarcely discourage a ruthless killer like Bashar al-Assad. He preferred to describe what he'd been proposing as a "limited" or "targeted" war. The difference, if there is any, is purely verbal.

If the president's much awaited address to the country this week left any impression at all, it was that of a deeply conflicted leader -- conflicted to the point of paralysis. No wonder the country hesitates to follow him. Whether he is advocating war or peace or some indeterminate state between them.

Other presidents have been forced to limit their aims by the merciless fortunes of war; this president limits his own. He cannot accuse the opposition of pulling the rug out from under him, not with any justice, for he does it to himself. For if the trumpet give an uncertain sound, who shall prepare himself to the battle?

What is his policy now? The short answer is that there is no telling. It might be summed up as Drift -- in no clear direction. The only fair summation of his message to the country Tuesday night would be: To Be Continued.