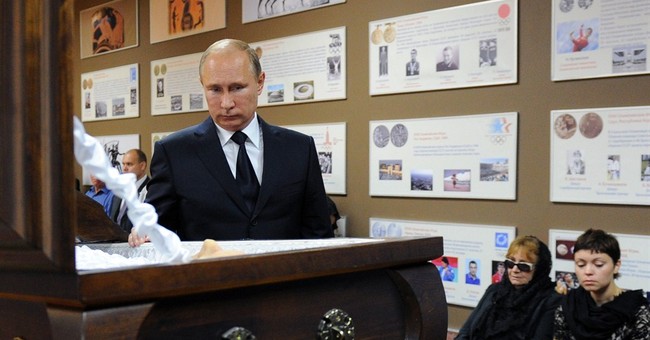 The news out of Russia never seems to be new. The names change, not the essence. Nor does the reaction of Russia-watchers: a deep, hopeless, wordless sigh. As if to say: What's to be said? Ah, Russia!

Like its seasons, Russia's prospects go from drab to drabber, interrupted only by brief periods of false hope. Russia veers from despotism to autocracy and back again, but no further. Glasnost and Perestroika, openness and reconstruction, are proclaimed from time to time, but they always end the same way: in repression.

This tragedy is restaged again and again. The cast may be different, but the script stays the same. And the ending is never a happy one. The only question, as with Russia's weather, is which will be more crushing -- the freeze or the thaw.

The more Russia changes, the more it stays Russia, more's the pity. Tsar becomes commissar, but what difference does it make? The official name of the secret police changes: Okhrana, Cheka, OGPU, NKVD, KGB, FSB . . . but the police state remains.

It's as if the Russian Revolution had become stuck in just one phase of the French Revolution, that model for all modern revolutions: the Reign of Terror. The terror might wax and wane, but it never goes away.

Ah, Russia! Ah, family stories. Russians white and red, czarist and Bolshevik, swept through my mother's little village in Poland -- her shtetl -- during the First World War, which went on years longer in Poland than on the Western front. She would awake every morning not knowing which troops had arrived like a swarm of locusts the night before -- Russians of one bloody persuasion or another, correct German regulars or roaming freebooters (Freikorps), Cossacks, sometimes even Poles. They washed over the village of Mordt like muddy waters.

Her father, my grandfather, had died during the war. Her eldest brother Avrom, disappeared post-war after formal hostilities had ceased. Half a century later, safe in America, she couldn't believe it when she heard that the Russians had launched a spacecraft and were headed for the moon. ("What? They couldn't even find their way around Mordt!") The only tsar she ever really knew was His Imperial Majesty Chaos.

By the time my mother made it to America, a 19-year-old girl traveling alone in steerage, she would be illiterate in three languages, knowing just enough German, Russian and Polish to help her survive. And she would step off the boat hungry to learn this strange, unphonetic language called English. Years later I would bring my little blue speller home from school every day so we could learn the words together. She was still studying.

She would also be a fanatical scrimper, saver and mender who never ceased working, if only on the sweater or quilt she was knitting at the time. My mother would spend the rest of her life looking over her shoulder, fearful that somebody would come along any minute and take all this away from her, this dreamland called America.

Her English remained imperfect, her native Yiddish sharp, and her silence most eloquent of all. The look of wordless contempt she would fix on anyone who dared criticize America in her presence could fill volumes. For who knows America who knows only America?

>[?Her youngest son, American-born, would one day read about the chaos and confusion that reigned after our own Civil War, and how bands of assorted marauders or just opportunists with an eye out for the main chance, Confederate deserters or Yankee carpetbaggers, would roam the Southern countryside, picking over the ruins. It all seemed strangely familiar to him. From family stories about the old country. Different countries, different histories, same human condition.

Russia veers from one tsar or commissar to another, with the occasional brief democratic leader -- like Kerensky -- fated for exile. At best. It's all enough to make any Russia-watcher give up on Russia except . . . except for one factor -- Russians. Time and again, like the wandering holy man in Russian tradition, the staretz, a prophet materializes out of the wilderness, or even out of the power structure, and begins to speak out. And the people listen.

Whether a Solzhenitsyn or Sakharov, a Slavophile or Westernizer, poet or nuclear scientist, the voice out of the wilderness captures the attention not just of Russians, but of the world. It's a recurrent pattern that goes back to Dostoyevsky and Tolstoy. Nobody elects or appoints these seers; they just appear. As if out of the Russian soul.

It was Solzhenitsyn who said a writer is a kind of second government. Only with more authority than the first, maybe because it is moral authority. Martin Luther King never held public office, nor did Mohandas K. Gandhi. Any more than the prophets of ancient Israel did. Yet they were heard. And still are. Oppression is the health of faith.

The latest voice out of the Russian wilderness is a mod dissenter uncowed by the threats he faces from those in political power. A tweeting prophet in shirtsleeves, he towers above his persecutors -- natural, direct, unafraid. His name is Alexei Navalny, and this is what he told the court that would convict him of the usual trumped-up charges:

"If somebody thinks that having heard the threat of this six-year imprisonment I would run away abroad or hide somewhere, they are badly mistaken. I cannot run away from myself. I have no other option and I don't want to do anything else. Not one of us has the right to be neutral. Not one of us has the right to shirk from doing what's necessary to make our world better. Each time someone thinks, 'Why don't I step aside and simply everything will happen without me and I'll wait?' he only helps this disgusting feudal regime that sits like a spider in the Kremlin."

Within a day after his conviction, Alexei Navalny was unexpectedly released. For now he's free to resume his campaign for mayor of Moscow. This tsar had blinked.

Yes, it's tempting to give up on Russia -- but then Russians like Alexei Navalny keep appearing despite everything. Or maybe because of it.

What is Russia's future? Its past. The only thing for sure is that it will remain . . . Russia. And that more great literature is about to emerge from its heart and soul.