Gettysburg at 150: The Show's Over, The Ghosts Remain 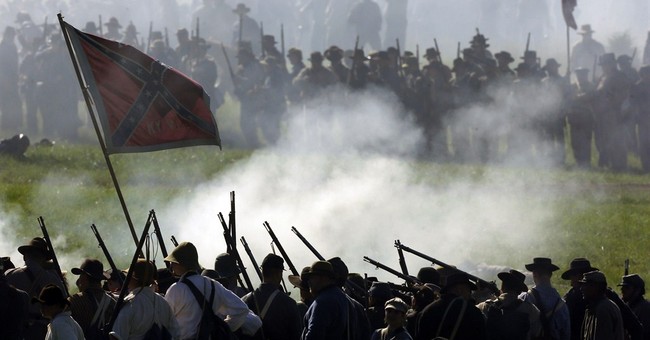 Muffle the drums, furl the flags. The commemoration of the 150th anniversary of the great battle is concluded, this year's faux battle lost and won, the hurly-burly done. The crowds and tumult are gone, and once again the grass is allowed to grow in peace. I am the grass; I cover all ... Two years, ten years, and passengers ask the conductor: What place is this? Where are we now? I am the grass. Let me work. This place is outside a small town in southern Pennsylvania just north of the Maryland line where two ridges parallel and Robert E. Lee determined to fight the decisive battle of The War. He did. It was.

Here the rock from which we are hewn -- The War that made us what we are, north and south -- came to its climax. The Union would never be the old Union again. For here there was a new birth of freedom, with all the travail and cries and blood of the first.

And here the Old South died, with its old grace and its old pretensions and its old curse that the Founders dared not even name in their -- and still our -- Constitution, as if even calling slavery what it was would also call down the old curse on the whole American venture. Their circumspection in framing the new republic's fundamental law was an unspoken recognition of how shameful the Peculiar Institution was; they dared not even call it by its right name.

Slaves would be referred to only obliquely in that founding document -- as "other persons" or persons "held to Service or Labour." Everyone understood, though not everyone dared admit, that the slaves' thralldom was at the root of this great conflict. It was their existence by the millions that was the ultimate reason why these two great armies would converge on this quiet, wooded terrain on a summer's day and turn it into a field of blood.

Now that hallowed place can fade back into the past again, its peace disturbed only by the tinny sounds of historical re-enactments and whatever detritus the tourists leave behind.

Now the grass returns, covering all. And the ghosts who never go away, though they may be obscured for a few days every July in the glare of artificial lights and an artificial battle, return to roam the places where they fought and died and made history -- Seminary and Cemetery Ridge, Devil's Den, Little Round Top, the Peach Orchard now planted with apple trees, the Wheatfield . . . .

What draws us to such places? The same thing that attracts pilgrims to a shrine -- this place was holy even if those who met here in mortal combat knew it not. Today we approach it warily, reverentially, unaware that the holy is everywhere, deep within us always, wherever we go, waiting only to be summoned up. And now, 150 years later, it is summoned at the mention of a single name: Gettysburg.

Little has changed here, and too much. At least and at last we are learning not to try and prettify the place. There are to be no more manicured lawns to go with the elaborate state memorials that dot the old scenes of carnage; the National Parks Service says it will try to restore the old fields as they were in July of 1863.

A visitor from the East, the real East, the Orient, must resist the urge to slip off his shoes when he follows Pickett's Charge up the ridge -- as far as it got. For this is holy ground. When he pauses in his pilgrimage and falls still, he can still hear the Rebel Yells faintly echoing, and then they stop. Like the Old South itself. For here it, too, fell. Now all we can do is stand in awe. We cannot dedicate -- we cannot consecrate -- we cannot hallow -- this ground. The brave men, living and dead, who struggled here have consecrated it, far above our poor power to add or detract.

How strange that the decisive battle of The War should be fought at an obscure crossroads away from the two rival capitals at stake, Washington and Richmond. The historians have explained it, or tried to, ever since. But they, too, the best of them anyway, approach the topic warily, as though they know they are treading on holy ground. Why here? Why then? How explain inexorable fate with diagrams and analyses and dioramas? It is futile. We are left only to wonder, for He moves in mysterious ways His wonders to perform. But why, oh why, must they be so bloody?

Looking down from Marye's Heights at Fredericksburg as his cannoneers tore apart the massed ranks of federals below, Lee could only say, "It is well that war is so terrible, or we would grow too fond of it." The same could be said of the successive waves of doomed Johnny Rebs and Billy Yanks as they were mowed down here in the Wheatfield like so many stalks of grain.

It is emblematic of the mythic status of one man that 150 years after his and his country's decisive defeat, Lee should still be at the center of the wonderment Gettysburg yet evokes. The central question about the battle remains not why the Union, once again our country, prevailed. But why Robert E. Lee didn't.

Who besides Civil War buffs can remember the name of the mediocrity who commanded the Union troops here? Lincoln would relieve George Meade, a perfectly competent if unaggressive general, for letting Lee escape over the Potomac with his army bloodied but still intact. Lincoln had not yet found his general in Grant, who at the same moment was finally taking Vicksburg as he would later take Richmond.

But what if Lee had heeded Longstreet's counsel and retired to a defensive position, despite his every instinct, and lay in wait? If only Jackson had still been at his side intuiting his every command even before Lee thought of it. ... If only Jeb Stuart hadn't ridden off on his private glory ride when Lee needed him most and left his commander blind, his scouts off who knows where....

In the unending recital of if-onlys and what-ifs that generations of Southern schoolboys would grow up debating, there is no sure answer for what happened at Gettysburg, no simple explanation, any more than it is simple to be an American. Let alone an American and a Southerner, grateful as one can be for being both. ("American by birth/Southern by the grace of God.")

A hundred and fifty years after he delivered his immortal address at Gettysburg, Lincoln's words still elevate and inspire. Southerners may now be grateful The War came out as it did, and we are Americans again. Our minds now tell us Old Abe was right, but our hearts, our hearts, will always belong to Bobby Lee and the Army of Northern Virginia.

After a century and a half, Major General George E. Pickett, he of Pickett's Charge, still has the best, most concise explanation for why Lee lost The War's decisive battle: "I always thought that the Yankees had something to do with it." Especially those boys from Maine under the command of a shy college professor (Joshua Chamberlain) who kept showing up at just the right time at just the right place in the Yankee line to thwart Marse Robert's best-laid plans.

But now it is time once again to muffle the drums and furl the flags -- till the next great anniversary -- and leave the ghosts in peace. And the grass to do its work.