There Goes Iraq--Again, or: Depart in Haste, Repent at Leisure 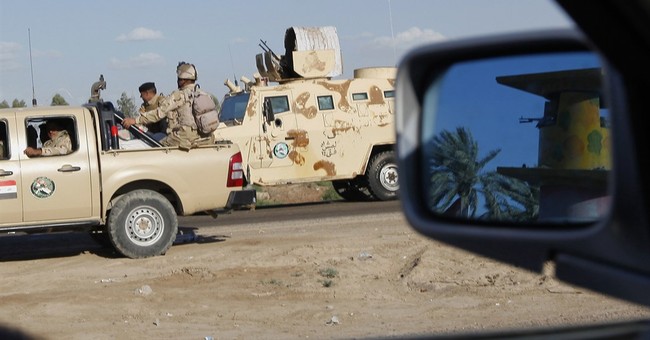 This week's news from Iraq isn't good, though when has it ever been? Well, maybe during those exceptional times when Washington was paying close attention and American troops were being given the support and leeway to do their job right. Indeed, superlatively. As they can be given their head and led by field commanders like David Petraeus, a thoughtful leader who had prepared himself -- and our whole military culture -- for a new kind of warfare called counterinsurgency.

Gen. Petraeus would later become a-cropper about a matter quite outside the military realm but all too common among the male and weaker sex. But he will forever deserve the respect of his fellow soldiers, and his fellow Americans, for turning imminent defeat into remarkably quick victory in Iraq.

This general not only wrote the book when it comes to counterinsurgency, or at least compiled and edited it, but put its ideas into practice when finally given the chance. By a president who could acknowledge that American strategy in Iraq had failed, and it was time to change it, his secretary of defense, and the country's whole approach to the war there. And change it dramatically, decisively, completely. And quickly. While there was still time to save the day and a country, and turn things around on a pivotal front in this long, long war against terror. Despite the dangers he knew such a U-turn risked, and despite all the usual kibitzers who warned him it would never work.

But it did. That new strategy was the Surge, and the president was George W. Bush. The doomsayers were legion at the time -- Barack Obama and Hillary Clinton and John Kerry and Chuck Hagel and Joe Biden -- but this bold new approach worked surprisingly well, so well that a president named Barack Obama would adopt it in Afghanistan, too. As he has so many of his predecessor's tactics in the War Against Terror, even if he cannot bring himself to call it that.

Whatever our president's criticisms of his predecessor, imitation remains the sincerest form of praise. By now Barack Obama has racked up some impressive victories of his own in this never-ending struggle. Just ask one Osama bin Laden, wherever in kingdom come he may be now, courtesy of the U.S. Navy Seals.

This current commander-in-chief has by now acquired his own loud critics, left and right, by prizing practical results more than ideological fantasies. See the list of terrorists who have come afoul of those ever-watchful drones during his tenure. Happily, Mr. Obama has not hesitated to approve their use, though no one denies they can claim innocent victims, as war always does.

But such successes have been fleeting in Iraq, and this president's emphasis on withdrawing from that war -- indeed, his obsession with withdrawing from it rather than winning it -- has proven all too tempting. The result has been a sad procession of headlines ("Fatal blasts/sap hope for/ a stable Iraq") that chronicle Iraq's deterioration into civil war. When there is no constancy of purpose, especially in war and maybe foreign policy in general, the fight for a stable world founders.

It's an all too familiar pattern in American history: Win every war, lose every peace. Those who still follow events in Iraq, however sad, can recognize that same old pattern emerging again.

But haven't we already spent a decade fighting there? Not to mention all the lives and treasure that war has cost. Why not leave at last?

It's a tempting prospect, but the one thing worse than fighting there, or at least backing up our Iraqi allies who still are, would be to abandon them at a crucial time. As our premature withdrawal from that country has come all too close to doing.

Why stay even longer? For the same reason American troops remain in Korea more than half a century after the war there ended. For the same reason American peacekeepers patrol around the globe from Kosovo to Sinai. This country may have no imperial ambitions, but that doesn't mean we have been spared the burdens of empire, which need to be shouldered if only for reasons of self-defense.

Since its hasty and artificial conception after the First World Calamity to meet the needs of the British Empire (for oil) and its Arab clients, Iraq has been less a nation than an amalgam of various tribes, creeds, and assorted ethnicities in tension, if not war, with one another.

The one part of this mix that works, Iraqi Kurdistan, is constantly at odds (over oil, mainly) with the central government, such as it is. Caught between Arabs on one side and Persians (now Iranians) on the other, Iraq doesn't need occupiers so much as a referee, an armed referee. One with no interest in the place except its stability, which is where we came in. And still are, if not as effectively or in such numbers as we should be and still could be.

The always relevant Tocqueville said it, as he said so many far-seeing things: However unwelcome to democratic societies war may be, it is "nevertheless an occurrence to which all nations are subject, democratic nations as well as others. Whatever taste they may have for peace, they must hold themselves in readiness to repel aggression...." Much as all of us might prefer it otherwise.

Better to accept a harsh reality and respond wisely to it than go chasing after some dream world that has never been and cannot be. The isolationist dream is a persistent theme of our history; so is the need to see through it.