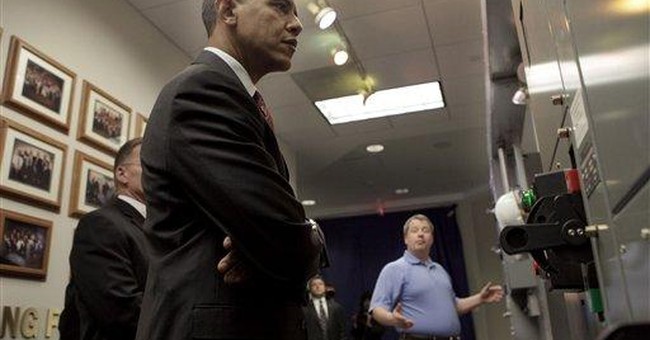 Imagine the reaction if Dick Cheney had talked like this about the state of public education in a great American city:

"This is a tough thing to say, but let me be really honest. I think the best thing that happened to the education system in New Orleans was Hurricane Katrina. That education system was a disaster, and it took Hurricane Katrina to wake up the community ... and the progress that they've made in four years since the hurricane is unbelievable. They have a chance to create a phenomenal school district. Long way to go, but that -- that city was not serious about its education. These people were being desperately underserved prior, and the amount of progress and the amount of reform we've seen in a short amount of time has been absolutely amazing."

Shades of George W. Bush when he was pushing No Child Left Behind. But that wasn't the previous president talking; it was this president's secretary of education. And he was right: New Orleans' old public school system was a disgrace.

Talk about the soft bigotry of low expectations. In NOLA, it was institutionalized. In pre-Katrina New Orleans, the good times rolled while the kids who were consigned to failing, violence-ridden holding pens called public schools might as well have been given a life sentence. Arne Duncan deserves an A for candor.

Make that past tense: deserved. By now he's had to apologize for being, as he said, "really honest." No candid comment goes unpunished in American politics. Especially if it's something that needed saying. Take it from a newspaper columnist: If you're not offending somebody somewhere, you're not saying anything worth saying.

Arne Duncan was right the first time, and anybody even vaguely familiar with New Orleans' old and crumbling public schools knew just what he meant. But there's no limit to the improvement even the most moribund of school systems can make once the deadwood is not only shaken but clear-cut. The same hurricane that devastated New Orleans also wiped out a school system full of patronage, politics and sloth. Finally people got a chance to start their public schools all over again. Complete with an emphasis on learning instead of the usual educanto. Yes, it can happen even in New Orleans, where rot is an art form.

After Katrina, the sun shone again. Charter schools were created, competition was encouraged, standards raised. New schools blossomed. One of the more hopeful developments was the arrival of a horde of Teach for America graduates eager to take on a challenge that would have daunted others. These young people, not knowing it couldn't be done, did it. They brought a new vitality and emphasis on academic achievement to a completely reshaped school system.

But the deadwood is already growing back in ever-fecund New Orleans. The first thing those who miss the comfortable old inertia want to do is get rid of the new young teachers in town. They find these interlopers too ambitious, too hard-working, too well-educated. In short, too Yankee. They don't fit in. They disturb the peace, or rather the sub-tropical languor of the storied old city. They get things done and kids educated. They're just -- what's the current fad phrase? -- culturally incompetent.

Arne Duncan was right: If every cloud has a silver lining, a hurricane can shine like gold. And give even long-suffering New Orleans a chance to build a whole new and better public school system.

It's going to be interesting to see how far our president (and Chicago pol) is going to let his secretary of education go when it comes to real reform. Arne Duncan is a fan of charter schools. And he proposes to have the states compete for federal grants on the basis of educational quality and innovation, rather than just lining up for their usual handouts. And the president seems behind him on both counts. So far.

Mr. Duncan is a product of the Chicago machine, and so must know how this game is played: Talk about reform is just fine, but actual reform -- especially the kind that irritates the teachers' unions -- has its political limits.

Secretary Duncan may already have hit a dead end in Washington, where the administration's political indebtedness to the teachers' unions has killed a voucher program for the poor kids who need it most. And the secretary of education dares not defend the city's outspoken school superintendent, Michelle Rhee, as she takes on the forces of inertia in public education there.