50 Ways to Beat the Cold 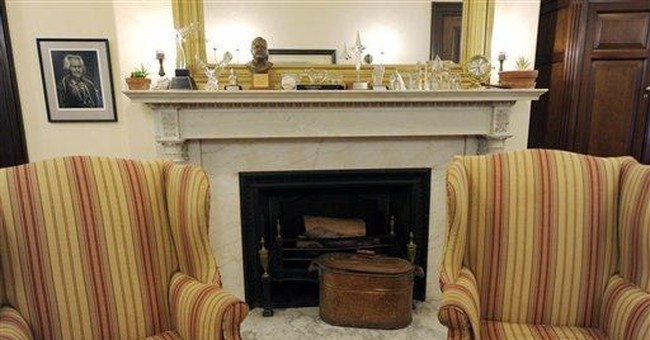 Here, presented as an annual public service, are 50 ways to stay warm during these wintry days -- and nights:

2. Popcorn. Or parched peanuts. Pretend you're at a ballgame on a sultry summer night in the spring, under the lights, complete with hot dogs. The home team is behind 3 to 2 in the bottom of the ninth, two out and two men on. The beer is sudsy, the peanuts hot, the old-fashioned organist who's been doing this for 40 years is adding suspense. ... Think Fenway and the fellowship of singing "Sweet Caroline" during the eighth inning.

4. Fireplaces in general. (Get that back log just right.) Enjoy the inevitable, heated argument over how to arrange the logs, kindling and accouterments. Get yourself some fatwood. My late mother-in-law once told me that there are three things every man believes he can do better than any other man; the other two are how to drive a car and how to build a fire.

5. Bathroom gas heaters. Never take them out when you remodel, no matter how unfashionable they've become. You'll be glad you didn't these freezing mornings.

6. Warm thoughts of those you love. Heated thoughts about those you don't.

10. Feed a cold, starve a fever. Or is it the other way 'round? Never mind. Food is comfort. So is folklore.

13. A game of checkers. Chess only when played with a time limit; slow moves freeze the joints.

15. Old movies set in tropical climes, in which the men wear pith helmets and the women sarongs, with Bette Davis and George Brent always mopping their brows. Start with "The Letter." Avoid "Dr. Zhivago" and "Nanook of the North." Save those for August.

16. Novels that cover three or four generations. Or try Douglas Southall Freeman's unabridged, four-volume biography of Robert E. Lee. Or Walker Percy's essays, collected some time ago in "Sign Posts in a Strange Land." "Anna Karenina" never fails to mesmerize. As does "Gone With the Wind" even if you know how who won The War. Gibbon's "Decline and Fall" may be the best cold-weather read of all time. Wrap up and nod off sometime during his description of the customs and mores of the Germanic tribes on the Empire's ever-shrinking borders. Gibbon's history tends to run on as long as the Roman Empire did, but his English is a joy.

17. Write a hot letter to a columnist. I probably need to be told off.

18. Save today's weather report to read at the height of summer. It'll sound delightful.

19. Chop wood. (Particularly good for working out emotional problems, and much cheaper than psychoanalysis.) Second choice: a punching bag.

22. Chinese food, Szechwan variety. Go for the red stars on the menu.

23. Five-alarm chili. Easy on the Fritos, lettuce, and cheese; heavy on the meat, sauce and chili peppers. There are those who put the Fritos on top and those who, inexplicably, put 'em on the bottom. These two types invariably marry one another. The way slobs and neatness freaks do.

24. For goodness sake, don't drive when it's icy. We'd like you to still be with us come next winter.

30. Ravel's "Bolero." If you can stand it one more time. Someone -- it may have been Ravel himself -- once described it as magnificent but not music.

32. See South Pacific. Or check out Elizabeth Taylor and the late great Paul Newman in "Cat on a Hot Tin Roof." Or maybe Kathleen Turner and William Hurt in "Body Heat." Or any movie set in New Orleans.

34. Dixieland jazz, not the cool kind.

35. Exercise the mind; turn off the TV. (Which is a good idea any time of the year.)

36. Think of the Internal Revenue Service. Or the health-care bill. Congressional earmarks. Barney Frank and Chris Dodd. Fannie Mae and Freddie Mac. Nancy Pelosi and Harry Reid. Timothy Geithner and AIG. Or homeland security being in the slippery hands of Janet ("The System Worked") Napolitano. If those topics don't get your ire up, nothing will.

37. See if you can still do 100 push-ups. Breaks for hot tea and general resuscitation allowed.

38. Sweaters. Galoshes. Gloves. Layers in general. Everything your mother told you to wear and then some.

45. Tea. Or black coffee with a soupcon of bourbon. Irish coffee, but for goodness' sake forget the whipped cream. It gets in the way of the whiskey.

46. Scarves. Woolen ones with a fringe.

47. Balaclavas, not to be confused with baklavah -- which wouldn't hurt, either.

49. Bring the pets indoors. Make it a three-dog night.

50. Watch "Animal Crackers." It may not make you any warmer, but the Marx Brothers will make you feel better.