Picture This, Or: Seeing Is Believing 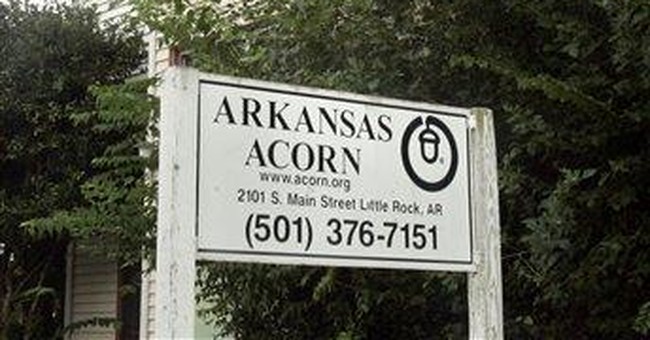 Not that folks with an iPhone, complete with camera app, need be reminded, but it's definitely a visual age. Which could explain why it's a vulgarized one. Nothing can be hinted at any longer, it must be shown. Preferably in stark lighting. Which may explain the long decline and sudden fall of ACORN.

It's scarcely been a secret all these years that ACORN has been an ongoing scandal. It's been involved in so many cases of fraudulent voter registration, I've lost count of how many of its people have been hauled up on charges. The last estimate I saw was something like 70 of its employees in 12 different states. Yet only now has it moved to the center of public indignation. What took so long?

In a way, ACORN's behavior is supposed to be outrageous. Founded right here in Arkansas, it's very business is community-organizing, protest-planning, and tantrum-throwing. For it strives to follow Saul Alinsky's classic guide to agitation for fun and profit. And it could have gone merrily on its scandalous way if some of its mischief hadn't been captured on film.

Last year ACORN became a highly unofficial arm of the Obama campaign. And was duly rewarded for its help by all kinds of government grants, which is how politics works. Not that you'll find it in Aristotle, but one working definition of politics is the art and science of who gets what when, where and how.

When the Republicans come back into power, if ever, look for some of the folks who are now prominent in Tea Party protests to be rewarded with their own government jobs and/or grants.

But a funny thing happened to ACORN on its way to collect its share of the spoils. A couple of visual provocateurs took videos of some not-so-funny goings-on in ACORN offices. The results would have made Borat, aka the satirist Sacha Baron Cohen, envious.

There, faithfully recorded on film, were our high-minded, socially advanced, ever so idealistic liberators of the proletariat at ACORN telling these actors playing a prostitute and her pimp how to beat the law and cheat the taxpayers.

This scandal might have been small potatoes compared to, say, the Abramoff Rip-Off a while back, which came to light during a different administration. But this outrage caught the country's ever-fickle attention. Why? Because it was filmed. Moral of the story: Film validates.

Something there is in a picture that makes things realer than real. Result: Congress was shocked -- shocked! -- to find all this struff going on at ACORN. It may even get around to doing what it should have done long ago: cutting off this outfit's water. That is, its federal funding. The videos made all the difference.

The same thing happened to the Black Panthers. They might have acted like thugs when they did their brutish part for Barack Obama's presidential hopes, but their threats could have been safely ignored if some of them hadn't been filmed intimidating voters at a Philadelphia polling station -- complete with racist insults, militia-like garb, and twirling billy clubs. That video couldn't be ignored, hard as this admnistration's Justice Department has tried.

No doubt both ACORN and the Black Panthers will take away a profound moral lesson from this painful experience. Namely, don't let yourself be filmed doing the dirty work.

I begin to better understand why, during the bad old days in these Southern latitudes, reporters might or might not be threatened by seggish mobs, but it was the photographers who got smashed -- along with their cameras. Their pictures might make all the difference; the rest of us had only words to rely on.

Back in the day, a news photographer had to be quick of thought and tongue to turn aside a mob. Bobby Jones of the Pine Bluff (Ark.) Commercial, who was in Little Rock to cover the Central High Crisis of 1957, used to talk about the time he was cornered by a bunch of roughnecks.

Bobby managed to turn aside their fury by explaining that he was a good ol' boy himself -- just up from Pine Bluff. He wasn't with one of those wicked Little Rock dailies. Or, heaven forbid, the hated national (read damnyankee) press. His accent probably helped. A fellow's got to think quick to save both his pictures and his hide.

Even today, the historic scenes folks remember about the Crisis of '57 tend to be those captured on film by cameramen like Will Counts and Larry Obsitnik. Their iconic images of that time will last as long as people have eyes.

Their successors keep hunting for the same kind of riveting shots. The news photographer's equipment may have changed over the years, but not the art. Keep snappin', gang. You're the ones, often as not, who make the difference -- and may pay the price.

From those of us with just a reporter's notebook and our vocabularies for equipment, our deepest respects. We only tell the story, you show it.