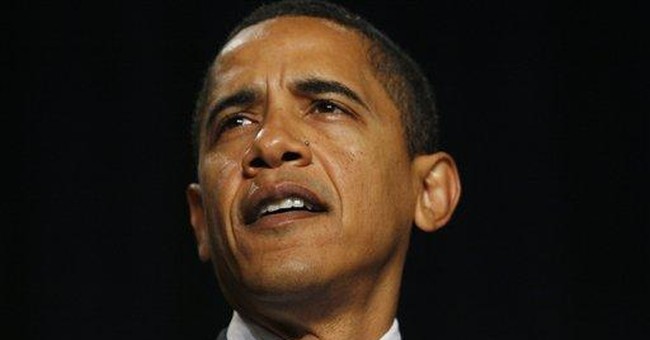 A bright new president announces he's going to have the most ethical administration in American history and, even before the new has worn off, has to accept the resignations of one after another of his top appointees when their ethical lapses come to harsh light.

It should. The calendar says 2009, the new president is Barack Obama, but it could be the false political spring of 1993, when Bill Clinton seemed almost as busy undoing his appointments as he'd been making them only days before.

Something else hasn't changed much, either: The distinguished former appointees almost uniformly explain that they're stepping down not because they've shown rotten judgment and/or complete insensitivity to the simplest ethical requirements, but because paying attention to such matters would be too much of a "distraction" from the great service they have and could still render an ungrateful public. (There is no limit to the egotism of political hacks when caught in a compromising position; it's as if they actually believed all the flowery introductions they've got at civic banquets over the years.)

Just read, if you can stand it, Tom Daschle's posturing, self-serving, glossing-over and generally beside-the-point statement on his decision to withdraw his nomination as the country's next secretary of Health and Human Services. In it, he says that "if 30 years of exposure to the challenges inherent in our system has taught me anything, it has taught me that this work will require a leader who can operate with the full faith of Congress and the American people, and without distraction."

So that's what questions about ethics, probity, duty and whether a public official has ignored them all have become in our sophisticated time: just a distraction.

What a pity Mr. Daschle's 30 years of exposure to the challenges inherent in our system, not to mention inherent in being a citizen of the United States, did not teach him to report his taxes, pay them in full, and refrain from raking in the dough like a defeated majority leader of the U.S. Senate with his hand out to every special interest in sight.

At last incomplete count, the former senator had collected nearly a quarter of a million dollars in speaking fees (and he's not exactly a Winston Churchill on the platform), not counting the more than $5 million he took in as a consultant to real estate, telecommunications and energy corporations.

And the hospitals and insurers and pharmaceutical companies that would have fallen under his extensive domain as secretary of Health and Human Services.

Oh, yes, there was also the little matter of his not paying some $128,000 in back taxes on undisclosed income until his delinquencies came to light. But all that is just a distraction, to hear Mr. Daschle tell it. Just as it would have been "a distraction and delay" to delve into her ethical problems, explained Nancy Killefer, who until the day before yesterday was Barack Obama's choice for chief performance officer for the entire federal government -- a Historic First, since President Obama just created that high-sounding post.

As it turns out, Ms. Killefer hadn't paid employment taxes for her household help until that same government whose performance she was going to monitor sued her for the back taxes. Chutzpah, thy name is Nancy Killefer.

Shades of Zoe Baird, one of Bill Clinton's successive picks as attorney general of the United States back in 1993. It turned out Ms. Baird hadn't paid her household staff's Social Security taxes, either.

There are few things lower than shorting the help, but somehow our presidents seem to find nominees who manage to do just that, and whose excuses when they are caught are even more annoying than the original offense.

To quote one aghast reader who took the trouble to e-mail me after Ms. Killefer's little problem hit the news: "Too bad someone who does wrong can't just come out and say they were wrong and apologize, rather than blame it on the unnamed critics who would rightfully criticize them for this.

"They don't seem to understand," Devoted Reader went on, "that when they don't pay the payroll taxes for their domestic help, they are not only depriving many other Americans of the advantages of funding Social Security and Medicare (which certainly need the money), but they are denying the lower-income people who work for them the ability to receive benefits one day. It's not fair, especially to millions of Americans who do the right thing by paying their taxes."

Beyond the fiscal ramifications of this kind of dereliction, what does it say about the culture of our new elite? Didn't there used to be an unwritten code in the best households about treating the help right? Wasn't that supposed to be the test of a true gentleman. And lady.

What ever happened to our sense of noblesse oblige, if anyone even uses the term any more? Once upon a time it didn't have to be used; it was simply understood. It was part of the fabric not just of the household but of society. Rank had not just its privileges but its obligations, and the best people were those who lived up to them. No more.

Now to inquire about such things is just a distraction.

In all this cloud of Clintonesque deja vu, there was one refreshing whiff of candor, and that came when our still new president -- very new -- made a point of going before the television cameras and talking straight. Barack Obama, who was still standing behind his appointment of Tom Daschle 24 hours before -- "absolutely" -- had seen the (klieg) light by yesterday, and was fessing up in one television interview after another: "I'm frustrated with myself, with our team ... I'm here on television to say I screwed up."

That was the one direct, unqualified apology in this whole farce. (It's too low, and the characters too ignoble, to call this a tragedy.) How refreshing. Also clear, concise and to-the-point. The president's comment gives one hope. For apology is the beginning of humility, and humility the beginning of wisdom. The education of Barack Obama proceeds apace, and his taking responsibility for his choices indicates he may yet prove an apt pupil.