Scrawled Notes on a Debate 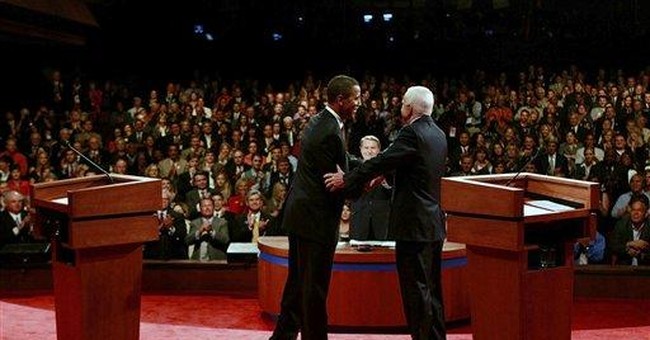 As I sit here after Friday night's presidential debate, my memory of it is as disjointed as the debate was. All I have to go by is a notepad full of hasty, incautious impressions. They're about as useful as a hangover from last night's binge.

Unrecorded in my notes, but permeating every page, is a feeling of resentment at having to watch an exercise that had so little to do with the pressing news of the moment: the financial crisis that both candidates had left behind in Washington in order to trade pleasantries, and a few unpleasantries, on national television.

The fulcrum of the country's financial and political seesaw was in Washington, D.C., where an historic deal to keep credit flowing and therefore businesses operating, was being worked out, or rather not worked out. A deal had to be cut before the markets opened Monday. And in the midst of all this the nation's eyes were being directed toward . . . Oxford, Miss.?

A lovely town, Oxford, which has retained some of its Faulknerian ambiance even in these denatured times. I love the place. But no one would confuse it with the center ring of the American economic and political circus maximus in A.D. 2008. Even when two presidential candidates were in town. But to what end? We live, as the historian Daniel Boorstin once noted, in the age of the non-event.

Both candidates sounded as if they were just exchanging canned comments they'd test-marketed for months out on the campaign trial. They did little in this two-man road show but reprise their familiar roles:

John McCain remains the man of action, having flown in from Washington at the last minute. He would head back as soon as the show was over. For he's still the Navy pilot veering off into every firefight. To what end isn't always clear. But where the action is, that's where he'd be as president. His critics call this recklessness, his admirers leadership.

Senator McCain does have a record of service he can be proud of in war and peace. Especially when it comes to (a) criticizing the administration's conduct of the war in Iraq early and often, and (b) helping it reverse course and adopt a new, successful strategy (the Surge) once he and a general named Petraeus finally got the commander-in-chief's its attention.

Barack Obama makes the perfect contrast with his opponent in this race. If John McCain is a doer, Barack Obama is a thinker. Or at least a talker. His time line on Iraq doesn't go beyond 2006, when American fortunes were at low ebb. To listen to him talk about Iraq, it's still 2006 and always will be. He's got a lot riding in this campaign on proving that American forces were defeated in a war that should never have been fought, and, if elected president, he might prove himself a prophet. For there is still time to snatch defeat from the jaws of victory.

Iraq doesn't matter, to hear Senator Obama tell it, because Afghanistan is really the central front in this war on terror, and that's where another three or four American brigades should do the trick. All of which reduces John McCain, a not very articulate man at his best, to a prolonged sputter. He tries to explain that the Surge wasn't just a matter of sending more troops to Iraq but how they were deployed in the midst of the population rather sequestered far from the action, and in close cooperation with Iraqi troops and tribesmen. The Surge wasn't just a new tactic but a new strategy.

A professor of law, Barack Obama is used to picking apart arguments, not deploying troops. Like most citizens in a post-draft America, he seems wholly innocent of even the rudiments of military culture. He speaks of military affairs with the assurance of someone who never had anything to do with them. For the first time in many years, I was reminded of an ROTC instructor of mine who was astounded beyond words that someone of our (apparent) intelligence just didn't get it.

In the end, the debate was a wash between the old warrior and young critic, though it did give the country some idea of what having a president who's really a critic-in-chief would be like. An Obama administration could prove one of the most introspective and least effective in American history. A McCain administration would be headed by a cantankerous chief, but one whose naturally impetuous temperament has been seasoned by experience. Which raises the possibility that he might actually get some things done. As for Senator Obama's experience, I get the impression it lies mainly ahead.