No Sale: General Obama and the Few 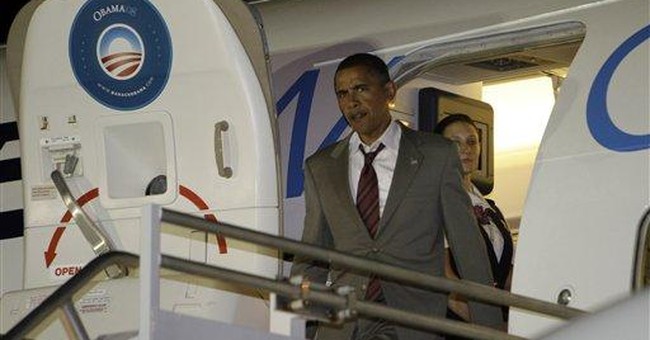 No wonder Barack Obama got such a tepid reception this week at the Veterans of Foreign Wars' convention. The better the United States does in Iraq, the worse he looks.

If only his strategy had been followed. His presidential campaign would be sitting pretty at this point instead of struggling to maintain a once comfortable lead. Iraq would still be Issue No. 1 instead of the economy, and he would be making the most of it - instead of events in Iraq working to his political disadvantage.

It's been a long McGovern summer for Sen. Obama as his lead in the polls has dwindled down, and he's been obliged to wiggle out of - excuse me, refine - one position after another. (Some of us are old enough to remember when he was still a left-winger instead of a waffler.) That he's quite good at shifting his political stances can't quite disguise the fact that he's doing it. And it's costing him his credibility. Especially when he insists that he's not changing his stance at all, not at all, just giving it some, uh, needed nuance.

Without the Surge in Iraq that, lest we forget, Sen. Obama strongly opposed, and whose success he still tries to deny, Iraq would be in chaos, America's enemies crowing, terrorism revitalized, our allies demoralized and the rest of the Middle East quaking.

But the growing prospect of victory in Iraq has tended to remove it as a political issue. Nothing unites like success. The brigades devoted to the Surge are now out of Iraq, the Iraqis are moving into political confrontations rather than civil war, and victory is in sight, not that Barack Obama is prepared to accept it.

There are few things sadder in this presidential campaign than General Obama's trying to depict himself as some kind of realist. When he does, as before the real vets this week, even his legendary smoothness deserts him.

Sen. Obama bridles when it's pointed out that, not to put too fine a point on it, he favored failure in Iraq. If this president and commander-in-chief hadn't finally followed John McCain's advice, changed secretaries of defense, and replaced his incompetent generals with an effective commander, America would now be confronting another Vietnam-era defeat - this one in the heart of the Middle East.

All of which might have been good for the Democratic presidential candidate's chances in this election, but it would have been disastrous for America and freedom everywhere.

At that infamous congressional hearing when the Surge was still largely an abstraction rather than an accomplished fact, Sen. Obama's co-star at next week's Democratic convention, Hillary Clinton, said it would take a "willing suspension of disbelief" to back General David Petraeus' new strategy. Which may have been the most memorable misjudgment in contemporary military history. And the junior senator from Illinois seconded her motion.

Both senators grabbed the headlines when they were predicting the Surge would never work. Now they're awfully quiet on the subject of General Petraeus and his strategy. Maybe they have some shame after all.

Has either of these armchair generals ever recognized how wrong they were on Iraq? Has either ever apologized to the real general whose leadership has matched the valor and skill of his troops in Iraq? Or praised George W. Bush for having the flexibility to adopt a whole new and better strategy in Iraq? If so, I haven't noticed.

Instead, Barack Obama pretends that it's his patriotism that's being criticized, not his military judgment, which has been more political than military. What a stark contrast with Sen. McCain's record. John McCain was criticizing Donald Rumsfeld in the strongest terms years ago, while Barack Obama was still nuancing like mad. As is his way.

Happily, Mr. Rumsfeld is no longer secretary of defense and we're winning in Iraq. But it was John McCain who stuck to the goal of victory through the darkest days in Iraq and never wavered, while Barack Obama was ready to pull out and hope for the best, which in reality would have been the worst possible outcome.

At one point, Sen. Obama said his policy toward Iraq was much the same as the president's, but that of course was early on, when we appeared to have won a short war.

Never fear: Barack Obama is not about to desert his country's cause in its hour of victory. It is only in times of crisis - when the enemy is advancing and America is divided and defeat seems inevitable, in those times that try men's souls, to borrow a line from Thomas Paine - that Barack Obama fails the test as president - and as commander-in chief.