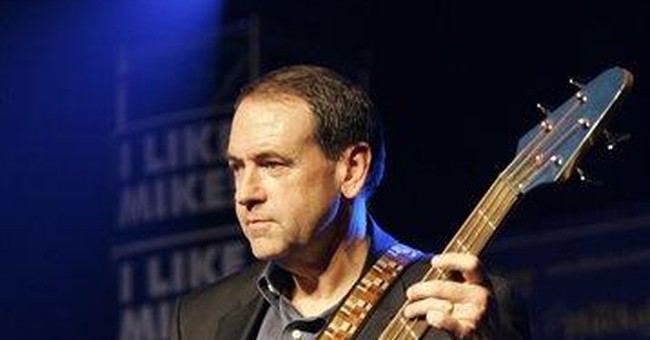 The surprising thing is that Mike Huckabee didn't make one of his really tasteless jokes much earlier this presidential year. Some of us who've followed his career here in Arkansas fully expected him to - and were surprised and relieved when he didn't. If he had, his impressively long run for the White House might have ended much sooner. Instead, our native son may have come a-cropper only now, just as he was being talked about as John McCain's running mate on the Republican ticket.

It seems the Huck, who's an irrepressible DJ at heart and in mouth, was talking to a convention of the National Rifle Association when he was interrupted by a loud noise. Impromptu vaudevillian that he is, he immediately said something awful (forgive me repeating it) about Barack Obama's having dived off a chair offstage after somebody had aimed a gun at him.

This kind of worse-than-bad taste may be forgivable, but not easily. Especially not for those of a certain generation whose memory was scarred for life November 22, 1963, when the shocking news rang out from Dallas that black day. Then there was the bulletin out of Memphis one early April evening in 1968 when Martin Luther King Jr. was gunned down. That shock was followed by a flash from Los Angeles in June that same, terrible year about another Kennedy at the height of his campaign for the presidencyŠ.

However many years pass, there will never be anything funny about gags that involve somebody's taking aim at a national leader.

In short, we were not amused. Mike Huckabee is a good man who made a great if hard-headed governor of Arkansas (the two qualities tend to go together in some leaders), and he apologized for his "joke" soon after he'd been graceless enough to make it. Let it be noted, however, that this time his one-liner was of a different order from the kind of vulgarity he tends to fall into on other, all too regular occasions, when his gags are simply vulgar.

Context can be all in these matters. It's one thing to sound like a jerk on the Don Imus Show; that's what such shows are for. It's another to do so with no talk-show host pressing you into exchanging wisecracks that would make the average teenager seem judicious.

I know a naive Arkansas editor (namely, me) who once accepted a spot on the Imus Show to plug his book about the Clintons back during the 1996 presidential campaign. I was so blessedly unfamiliar with the basement level of talk radio that I didn't know who Mr. Imus was at the time, or anything about the guy's leering modus operandi.

So I was abashed when my radio host began pressing me for details about the president's sex life. Let it be noted that this was well before that topic had become the subject of false oaths, the impeachment process, and a whole mess of charges about perjury and obstruction of justice, and therefore a legitimate and indeed unavoidable topic of the day's news. Embarrassed, I explained that I wasn't interested, not interested at all, in discussing such a thing. It's hard to imagine a talk-show host taking any such No Thank You for an answer these unembarrassable days, but Mr. Imus did so then. For which this editor is still thankful. It was a different and better, if rapidly deteriorating, culture back then.

We now live in a time when Brother Huckabee - he's a Baptist preacher as well as a politician, a piquant combination - makes a joke about somebody pointing a rifle at a presidential candidate and, though he apologizes for it later, still treats it as just a gaffe.

What really troubles is the Huck's tendency to take a kind of perverse pride in his unfortunate tendency to tell tasteless jokes, as when he just has to add: "And, you know, it wasn't the first dumb thing I've ever said and, let me go ahead and announce on this program, it won't be the last dumb thing I've ever said." He sounded like an incorrigible kid who tends to brag about his screw-ups instead of publicly resolving never, never to indulge in them again.

And, no, Rev. Huckabee, despite what you said in explanation, this wasn't comparable to Ronald Reagan's joking about nuclear war when that president thought he was just testing a mike safely out of public earshot.

Once again, we're confronted with an all too common failing of contemporary American manners: Doesn't anybody know how to apologize any more? That is, by just saying I'm Sorry and stopping there - without having to add the inevitable "but..." and going on to minimize the offense, which only aggravates it.