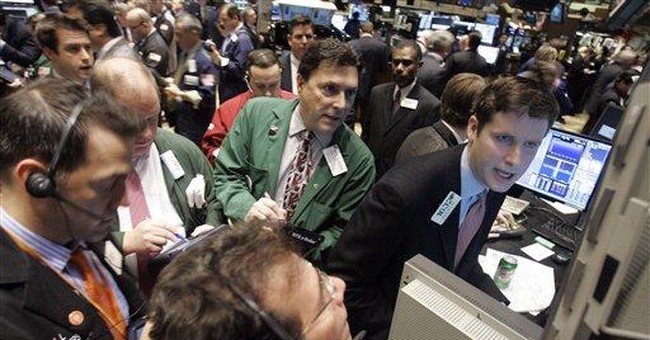 A curious reader of our editorial page here at the Arkansas Democrat-Gazette wants to know if we publish every Paul Krugman column we get from the New York Times Syndicate or just the gloomy ones.

It is wholly a pleasure to satisfy Curious Reader's curiosity:

Sir, they are all gloomy, and have been since my memory runneth not to the contrary.

But, no, we don't publish every Paul Krugman column we get.

For that matter, we don't - and couldn't - publish all the work of any single syndicated columnist, there's so much out there in the not so brave new world of electronic cyberspace, where anybody can be his own pundit, even anonymously.

But before I start sniffing at these mere amateurs, allow me to be candid on that subject, too: The proliferation of blogs may be much closer than oh-so-respectable journalism to the freedom of the press envisioned by the authors of the First Amendment. They lived in a world of pamphleteers in which the readers were the judge of quality, not some distant authority cloaked in a Ph.D. with a magisterial column in the New York Almighty Times.

Respectability may be a far greater enemy of freedom of thought than the wildest array of opinions on the net. In the Golden Age of television, which was really more like brass, the whole country tuned in to Walter Cronkite on CBS every evening to see the proper way to react to the news. (The really adventurous might try NBC's Huntley-Brinkley on occasion.) Those were the days when the gamut of American opinion ran from A to B. Give me the wild, wild net any time.

Which brings me to the respectable if not dowdy Dr. Krugman. His mantra not only of the day but of the Bush Years has been that we stand on the edge of worldwide economic collapse, another Great Depression, widespread panic, and maybe an asteroid shower to top off Global Warming. A collection of his columns would beat any disaster movie ever made, including Al Gore's. After reading Dr. Krugman first thing in the morning, it's a wonder Times readers have the strength to finish their breakfast. What's the point?

The only thing funny about the professor's oeuvre is his prose, as in his philippic against the Bush tax cuts years ago, a tax cut that launched one of the great growth spurts of the American economy: "And when the chickens that didn't hatch come home to roost, we will rue the day when, misled by sloppy accounting and rosy scenarios, we gave away the national nest egg."

Just try to picture all those unhatched chickens coming home to roost only to find the nest egg gone. That's good for a smile on even the cloudiest day.

This does not mean that Professor Krugman's lamentations are without their uses. While not printing them all, we do save the most depressing for those times when the economy seems to need a real boost. What with all the talk of recession in the air, the stock market skidding, the Fed cutting its interest rate like mad, the president and Congress hurrying to do something even if it's wrong, the time had come to roll out the ultimate weapon: a Paul Krugman column. Maybe two in succession. Desperate times required desperate measures.

Sure enough, the Dow promptly proceeded to rise more than 600 points from its morning nadir Wednesday to close some 300 points higher for the day, or up 2.5 percent. It was the biggest swing in a single day's trading since 2002. Once again the professor had worked his magic.

Who knows if it'll take? Or should? There may be worse things than an overdue recession of short duration - like cures that only inflate the dollar instead of strengthening the economy, and could lead to a return of Carter Era stagflation.

But there's little doubt that Paul Krugman's voodoo still works, if not in the way intended. This guy may be the greatest prophet since Balaam. Every curse he utters has a way of turning into a blessing.

Sorry, But That’s the Rule: President Asterisk Is A Draft Dodger
Townhall
Blue-check called out for lying about Sen. Josh Hawley
Twitchy
Rand Paul Serves As An Example Of How Not To Be Bullied As George Stephanopoulos Badgers Him On Election Fraud
Redstate
You Knew Trump Sacrificed While Working for Free as President, Now We're Learning How Big a Financial Hit He's Taking
PJ Media