Paul Driessen
|
Posted: Jun 15, 2019 12:01 AM
Share   Tweet
The opinions expressed by columnists are their own and do not necessarily represent the views of Townhall.com. 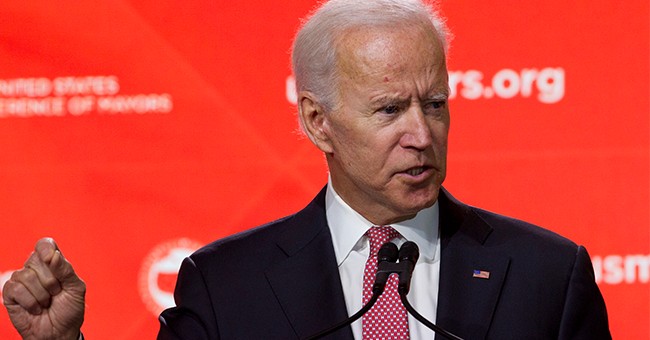 Presidential candidate Joe Biden recently announced his “Plan for a Clean Energy Revolution and Environmental Justice.” While it might be viewed as a Green New Deal Lite, the plan would inflict serious economic, environmental and societal pain on most of the nation, for no climate benefits.

First, as I’ve pointed out here and elsewhere, Mr. Biden’s “climate emergency” exists in computer models and alarmist reports, but not in the Real World outside our windows. Tornadoes, hurricanes, droughts, floods, melting ice and rising seas are no more frequent or severe than humanity has experienced before.

Before we destroy our energy and economic system, we need to be presented solid, irrefutable proof that we face an actual climate crisis – and be able to debate and cross examine those who make such claims. So far, instead of having an opportunity, climate crisis skeptics get vilified and threatened with prosecution.

Second, anytime you hear the term “environmental justice,” you know someone is trying to create a new category of victims, sow more discord along racial and economic lines, and punish someone new in the name of “justice.” While we still have pockets of pollution, America’s cars, air and water have been cleaned up dramatically since 1970. Moreover, the best way to prevent, survive and recover from any disaster is to have the energy, wealth and technologies that fossil fuels continue to make possible.

Third, there’s nothing clean, green, renewable or sustainable about wind, solar or battery power. Those technologies require enormous amounts of land, concrete, steel and other raw materials – and many of their most critical materials are extracted and processed using child labor, at near-slave wages for adults, with few or no workplace safety rules, and with horrific effects on land, air and water quality.

Fourth, the Biden plan would cost many times the “$1.7 trillion in federal funds over ten years” that his talking points use to entice voters: in dollars, lost jobs, lower living standards and fewer freedoms.

The former VP would rejoin the Paris climate treaty; reverse many Trump corporate tax cuts; seek or impose multiple mandates, “enforcement mechanisms” and “legally binding” emission reductions; and at some point demand cap-and-trade schemes and/or taxes on what he likes to call “carbon emissions.”

That term is intended to suggest dirty soot coming out of smoke stacks. The actual emissions are carbon dioxide, the life-giving gas that humans and animals exhale, and plants use to grow and produce oxygen. The more CO2 in Earth’s atmosphere, the better and faster crop, forest and grassland plants grow.

Mr. Biden would also impose tariffs on “carbon-intensive” goods imported from countries that “fail to meet their climate obligations.” That will quickly affect just about everything we eat, drink, drive, do and use – because his plan would soon make it difficult for America to grow or produce much of anything ... and China, India and other rapidly developing countries are not about to reduce their fossil fuel use.

Every Biden Plan action would increase the cost of living and of doing business. The folks he hobnobs with – who will write, implement and enforce these rules ... and bankroll his election campaign – won’t much notice or mind the soaring prices. But middle and blue-collar classes certainly will.

Other components of the Biden Green New Deal really start multiplying those impacts and costs.

Modern industrialized societies simply cannot function on expensive, intermittent, weather-dependent electricity. As Germany, Britain, Australia and other countries have shown, that kind of energy eliminates 3-4 times more jobs than it creates – especially in factories and assembly lines, which cannot operate with repeated electricity interruptions ... and cannot compete with foreign companies that get affordable 24/7/365 coal-based electricity and pay their workers far less than $15, $25 or $45 per hour.

“Rigorous new fuel economy standards” would speed the rate at which 100% of all cars and light trucks become electric. This program would be supported by “more than 500,000 new public charging outlets by the end of 2030,” to augment private charging stations in homes and neighborhoods.

This would require upgrading home and neighborhood electrical systems to provide far more power for rapid vehicle charging, and longer hours of peak demand. Extending mileage for (much more expensive) electric vehicles would mean lighter, smaller cars ... and thus thousands of additional deaths and millions of additional serious injuries. Dollar costs would soar. But how do we calibrate injury and death tolls?

Federal tax and environmental laws, subsidies and other incentives would be used to persuade counties and communities to “to battle climate change” by altering their zoning and other regulations “to eliminate sprawl and allow for denser, more affordable housing near public transit.”

The impact on suburban living and property values would be significant. And packing more people into apartment buildings would likely mean diseases spread more rapidly and to more people.

Other federal programs would provide subsidies and incentives for home and business owners to reduce “the carbon footprint” of US buildings 50% by 2035.

This could involve retrofitting them for improved energy efficiency and/or replacing gas furnaces with electric heat or heat pumps – or just tearing down and replacing entire buildings. More trillions of dollars.

The Biden plan would also ban new oil and gas permitting on public lands and waters.

This would lock up vast quantities of valuable, vitally needed fuel. It would replace tens of billions of dollars of annual federal and state government bonus, rent, royalty and tax revenue with tens of billions in subsidies for pseudo-renewable energy. It would eliminate millions of jobs in the petroleum and petrochemical industries, in numerous companies that rely on those industries, and in countless sectors of local and state economies that depend on all that public land energy activity and revenue.

Finally, a new transcontinental high-speed (electricity-powered) rail system would connect the coasts – or at least a couple of cities on each coast.

This is California’s costly “bullet train to nowhere” on steroids. It would bypass numerous towns and cities, marginalizing many of them and destroying trillions of dollars in property values – especially if his rail system is intended to replace or significantly reduce air travel and long distance driving.

The cumulative electricity demand for all these Biden Green New Deal programs would be at least double what the United States currently generates. It would mean wind turbines and solar panels on scales that few can even imagine ... especially as they go into less and less windy and sunny areas. And if all this power is to be backed up by batteries – since coal and gas-fired backup power generators would be eliminated – we would need billions of batteries ... and thus even more land and raw materials.

After banning oil and gas permitting, would Mr. Biden open other federal lands to exploration, mining and processing for the rare earth and other materials these massive “renewable” energy systems will require? That would certainly create new industries and jobs. Or will America just have to be 100% dependent on Chinese and other foreign suppliers for all these technologies?

Perhaps Mr. Biden can provide answers to all these questions – at his next town hall or press conference.

The time to discuss these issues is NOW. Before we get snow-jobbed and railroaded into actions we will sorely regret. Or maybe those of us who realize how insane all of this is will just have to opt out -- and establish Biden-free zones and climate sanctuary states where none of his policies and restrictions apply.

Paul Driessen is senior policy analyst for the Committee For A Constructive Tomorrow (www.CFACT.org) and author of books and articles on energy and environmental science and policy.