Paul Driessen
|
Posted: Feb 24, 2019 12:01 AM
Share   Tweet
The opinions expressed by columnists are their own and do not necessarily represent the views of Townhall.com. 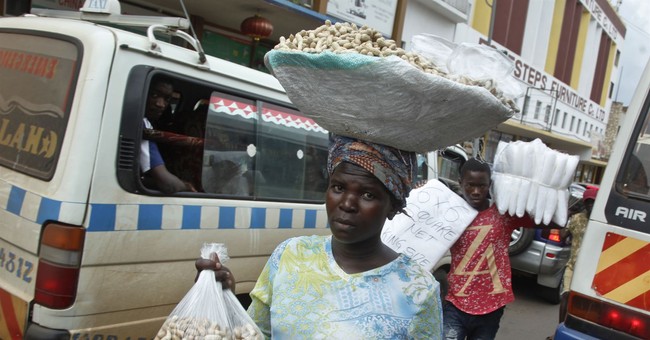 “She has gone to the Lord,” her sister Diana told me a few days ago. And with Fiona Kobusingye’s passing, after a courageous battle with cancer, the Congress of Racial Equality Uganda lost another leader.

However, their legacy remains, the battles they began rage on – and Uganda and Africa are clearly and consistently demonstrating their determination to achieve energy, health, human rights and living standards equality with Europe, America and other industrialized economies. They are determined do so using the same fossil fuel and other technologies that those already wealthy nations used in their ascent out of the nasty, brutish, short lives that were all of humanity’s lot just a few short centuries ago.

I met Fiona 15 years ago at a Congress of Racial Equality Martin Luther King dinner organized by her late husband and my close friend, CORE international affairs director Cyril Boynes, Jr. They got married, Cyril moved to Uganda, and together they launched the human rights and economic development group CORE Uganda. She served as co-chair and with Cyril mentored young people, co-hosted conferences, and fought tirelessly for disease control, energy development, modern agriculture and clean water.

Like Cyril, she was passionate about these issues, including using DDT and other insecticides – what she called “the African equivalent of chemotherapy drugs” – to prevent malaria and other devastating insect-borne diseases. She wrote in a 2006 Washington Times article:

“I have had malaria more than a dozen times. I lost my son, two sisters and three nephews to it. My nephew Noel got malaria at age two and is still four years behind high school boys his age in reading and writing skills, because it affected his mental powers so horribly. My brother Joseph used to help in an office and with complex farming tasks, but his mind no longer works well because of cerebral malaria.

“We need to calculate the value of those lives affected by being sick with malaria for weeks every year … of mental capacity lost due to malaria … of 1.5 million African lives lost every year. Even at $1,000 to $10,000 per life, the impact of malaria – and the value of DDT – is monumental.

“This month, another malaria outbreak hit the Kabale district in southern Uganda. More than 6,000 people were admitted to clinics in just one week. A spraying program with Icon (a pyrethroid also used in agriculture, and which thus can quickly breed mosquito resistance) resulted in the deaths of two students. That is terrible, but last year 70,000 Ugandans died from malaria. In 65 years, DDT never killed anyone.

“Should we stop spraying, to prevent more deaths from Icon or possible learning delays from using DDT – and sacrifice another 70,000 Ugandans again this year?

“Yes, there are risks in using DDT – or other anti-malaria weapons. But the risk of not using them is infinitely greater. One-sided studies and news stories frighten people into not using the most effective weapons in our arsenal – and millions pay the ultimate price. That is unconscionable.”

After Cyril died in 2015, Fiona moved to New York City to help care for Diana’s autistic son and earn money to provide for her adopted children in Uganda. Even after being diagnosed with incurable cancer, Fiona retained her humor, indomitable spirit and deep belief in God throughout her difficult illness and treatment, right up until she passed away.

She is survived by a daughter, five sisters, eleven brothers, two grandchildren, five adopted children, and many nieces, nephews and other relatives. She remains beloved by all who knew her. Readers wishing to honor her legacy, bury her in Uganda and help support her family can go to her GoFundMe page.

Fiona got emotional when she wrote about environmentalist groups and US, EU, World Bank, WHO and other rich country bureaucrats who she believed were using Africans as test subjects in “energy, malaria and agricultural experiments that perpetuate poverty, disease, malnutrition and death in the name of protecting the environment.”

“China and India put up with this immoral eco-colonialism for decades,” she wrote. “Finally, they had enough. They refused to be the environmentalists’ experimental pawns any longer. They took charge of their own destinies, charted their own future, financed their own projects, and refused to be stopped again by anti-development green policies, politicians and pressure groups.

“Uganda, the Great Lakes Region [around Lake Victoria] and all of Africa need to do the same thing. We have the land and natural resources, the bright and hard-working people.

“Let us be brave and bold!” Fiona exhorted. “Let us become prosperous and healthy together.”

Her beloved Cyril shared and stoked her passions. He too wrote articles and spoke to Ugandan officials, journalists and students on these topics. A biotechnology conference he organized at the United Nations featured experts like Norman Borlaug, father of the first Green Revolution. The audience included scores of high school students, many UN staffers and people from all over New York City.

Cyril also served as executive producer for a documentary film about the ways modern genetically modified crops dramatically reduce the need for poor African farmers to hand-spray crops with pesticides, while preventing pest damage, increasing crop yields many times over, and bringing hope and much improved living standards to African farm families.

He too dreamed of a prosperous modern Africa and described how he, a devout Christian, was deeply inspired by a Jew (business professor, economist and author Julian Simon) and a Muslim (banker-economist Muhammad Yunus). He pilloried the Rainforest Action Network for its incessant human rights violations: its campaigns to prevent Africa from using DDT or other insecticides, fossil fuels or even expanded hydroelectric power.

Cyril brought me to Uganda, to see firsthand what they were accomplishing. The three of us spent tow frenzied weeks speaking to government, radio, television, high school and university audiences on these subjects. Thanks to George Mason University, we were able to give soccer balls, shoes, shin guards and uniforms to grade school boys who previously had to play barefoot with rags rolled and tied into a ball.

Fiona and Cyril aided her extended family and mentored scores of promising young people. One of them, Steven Lyazi, steadily improved his writing skills and published many articles online, before he was tragically killed in a horrific bus accident in 2017.

“Calls for us to live ‘sustainably,’ use wind and solar and biofuel power, and never use fossil fuels, are a demand that we accept prolonged starvation and death in our poor countries,” Steven wrote in one article. “They mean desperate people will do horrible things to survive, even just another day.”

In another column, he pointed out that wind and solar power are far better than wood and animal dung fires. But in reality they are nothing more than “short-term solutions to serious, immediate problems. They do not equal real economic development or really improved living standards. Our cities need abundant, reliable electricity, and for faraway villages wind and solar must be only temporary, to meet basic needs until they can be connected to transmission lines and a grid.”

When will the day come, Steven wondered – echoing what Fiona and Cyril had been saying for over a decade – when politicians and activists, who say their care about the world’s poor, “stop worrying about global warming, pesticides and GMO crops – and start helping us get the energy, food, medical facilities, technologies, jobs and economic growth we need to improve our lives?”

Fiona, Cyril and Steven live on in their eloquent, passionate articles. Their long battle for equality and human rights, through access to modern technologies, will continue – bringing their dream of a free, prosperous, healthy, vibrant Uganda and Africa ever closer to reality.

Paul Driessen is senior policy analyst for the Committee For A Constructive Tomorrow (www.CFACT.org), and author of Eco-Imperialism: Green power - Black death and other books on the environment.