Paul Driessen
|
Posted: Feb 03, 2018 12:01 AM
Share   Tweet
The opinions expressed by columnists are their own and do not necessarily represent the views of Townhall.com. 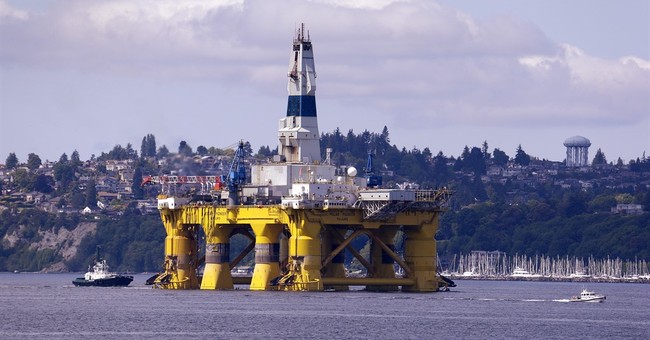 Under the current offshore energy program developed during the Obama years, 94% of the nation’s Outer Continental Shelf (OCS) is off limits to leasing and drilling. Under the Draft Proposed Program (DPP) announced January 4 by Secretary of the Interior Ryan Zinke, over 90% of OCS acreage and 98% of “undiscovered, technically recoverable oil and gas resources” in these federal offshore areas (beyond the 3-mile limit of state waters) will be considered for possible future leasing, exploration and development.

The Trump-Zinke plan proposes the largest number of lease sales in US history: 19 off Alaska, 7 in the Pacific, 9 in the Atlantic, and 12 in the Gulf of Mexico (where the vast majority of leasing, drilling and production have taken place over the past 65 years). Government experts estimate that these areas could hold 90 billion barrels of oil and 327 trillion cubic feet of natural gas, worth over $6.5 trillion.

Shortly after the DPP was presented, Florida Governor Rick Scott contacted the secretary, discussed the plan and issued a statement saying the Eastern Gulf was no longer under consideration. Other governors insisted that areas off their coasts also be eliminated from consideration. Energy companies and others said the Florida decision was premature, and the normal planning process should be followed.

Actually, there has been no decision on Gov. Scott’s request, and the process is being followed. The Department of the Interior (DOI) and its Bureau of Ocean Energy Management (BOEM) are still in the midst of their 60-day comment period on the DPP. That will lead to a Proposed Program, Draft Programmatic Environmental Impact Statement and another public comment period. A Proposed Final Program, another EIS, more public input, and eventually a new Five-Year Leasing Plan will follow.

Meanwhile, Sec. Zinke will be speaking with coastal state governors and legislators, to hear their concerns, explain the process, and discuss how drilling can be conducted with increasing safety.

Somewhere during this long process, new seismic surveys should be conducted, to identify and interpret subsurface structures that could contain oil and/or natural gas. The last Atlantic region surveys were 30 years ago, and other areas were never surveyed. Oil companies need high quality data to determine whether an area has enough potential to warrant bidding on a lease. The BOEM needs the best possible data to make informed decisions on which areas should be kept in or dropped out of the planning process – and later on whether bids reflect an area’s potential value or should be rejected.

Since companies may be reluctant to spend many millions on seismic for areas that may never be made available for leasing, creative incentives may have to be developed to get that vital information.

Leasing and drilling would come only in some areas, only after this entire process has been completed.

The 1969 Santa Barbara and 2010 Deepwater Horizon blowouts are indelibly etched in our memories, even though these two spills are the only ones in some 1.3 million wells drilled in state and OCS waters since 1969 where significant oil reached shore and caused serious environmental damage (which nature slowly but surely repaired). They show why public concerns about oil spills must be heard and addressed.

Neither of these major spills (nor any of the other dozen instances of lost well control involving more than 50 barrels of spilled oil since 1969) should have happened – just as car, train, airliner and other accidents should never happen. They happened because of human frailties and failures: in technologies, equipment maintenance, vigilance, training, and timely operator and regulator reactions to unfolding crises.

That’s why offshore drilling and production operators, in conjunction with state and federal regulators, are doing much more to prevent future accidents, including tougher standards, better training and equipment maintenance, improved blowout preventers and oil spill response equipment, and establishing a Center for Offshore Safety to ensure best practices and constant improvement in these and other areas.

One of the most fascinating aspects of offshore production platforms (rigs) is the artificial reefs they create on support structures beneath them. I’ve been scuba diving beneath California and Gulf of Mexico rigs, fished off them, written professional papers and magazine articles about the reefs, and produced a documentary film about this phenomenon and the process of turning rigs into permanent reefs once they are no longer producing oil or gas. The amount and variety of marine found there is simply astounding.

Vibrant arrays of colorful sea anemones, corals, sponges and shellfish latch onto platform legs, providing habitats and food for crabs and lobsters and attracting legions of fish of every conceivable species. Gulf rigs provide homes for Caribbean species that couldn’t exist in this vast mud-bottom region that Mississippi River sediments created. Because they are in such a nutrient-rich zone, California platforms host scallops the size of dinner plates, mussels six inches long and starfish nearly three feet across!

Fishing, shrimping, tourism and military ops continue to thrive in the Gulf, among hundreds of rigs. And yet some say they don’t even want to see a few dozen oil platforms three to twenty miles off Atlantic coast beaches. How do they feel about hundreds or thousands of 400-foot wind turbines a thousand feet to three miles offshore? That is what’s being discussed to replace fossil fuels and nuclear in electricity generation.

Those huge turbines would chop up seabirds that will sink out of sight and mind; create obstacle courses for pleasure, military and commercial shipping; and  emit constant low level noise that will interfere with aircraft as well as whale and porpoise sonar navigation and communication.

After taxes, OCS operations provide the second largest source of revenue to the US Treasury. Some of this goes to the Land and Water Conservation Fund for environmental programs. However, OCS revenues fell from $18 billion in 2008 to $2.5 billion in 2016 – even as state offshore oil and gas revenues actually rose during the same period. This decline was partly because of lower oil and gas prices, but largely because the Obama Administration issued so many regulations and delays, but so few leases and permits

The US Energy Information Administration projects that oil and gas will still supply two-thirds of the USA’s energy three decades from now. OCS resources developed under this new plan will come online as current and near-term deposits are being depleted. Those resources belong to all Americans.

It is the responsibility of state, local and federal governments to help ensure that America knows what oil and gas resources might exist off our shores, so that we can make informed decisions about developing the best prospects – while safeguarding marine and coastal habitats, tourism and other values.

East and West Coast states have enormous demands for oil and gas, to fuel tourism and other sectors. They should have full roles in discussions, input, planning, decision-making, oversight, inspections and other aspects of offshore oil and gas operations. But they should help meet energy needs and should not have the power to short-circuit or veto the process – or to block OCS or other development in Alaska or the Central or Western Gulf of Mexico, if those states and local communities support leasing and drilling.

We should let the planning process move forward – and make sure we drill and produce this energy safely.