Paul Curry
|
Posted: Oct 04, 2019 1:34 PM
Share   Tweet
The opinions expressed by columnists are their own and do not necessarily represent the views of Townhall.com. 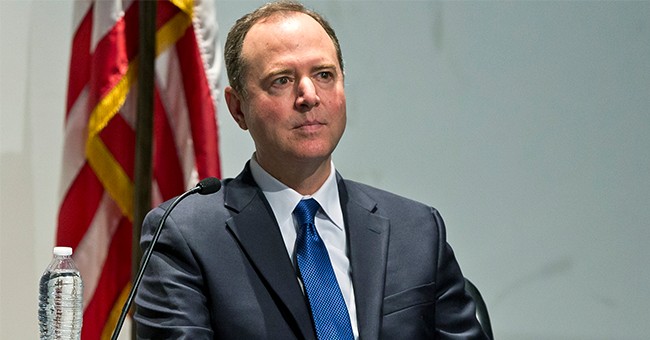 Adam Schiff has lost it. The Democratic Chairman of the House Intelligence Committee has surrendered any semblance of credibility. Be it through an unparalleled zeal to get the president, or a desperate attempt to remain relevant in a Democratic Party drowning in presidential hopefuls striving for some leftist utopia, Schiff has turned himself into a caricature. A poor man’s Joe McCarthy, convinced of some mythical threat, and willing to say, do, or fabricate any modicum of support for his delusions. This is where he needs some friends, loved ones, or a professional therapist to sit him down and calmly say, “Adam, you’re hurting those around you, and you need to stop.”

The power of the Congress to investigate and remove the president is the most awesome power the legislative body has, even more so than the power to declare war. The president has the authority to use military force absent congressional action, yet the Congress has the ability to overturn the American election and nullify the democratic process. That is not a power to be taken lightly, nor one that should be wielded by a man with less credibility than a fortune cookie.

It has been a rough year for poor Congressman Schiff. He confidently strutted around Washington, assuring anyone who would listen that he had evidence of President Trump’s collusion with Russia. Of course, he had none. A false assertion for which he has never been held to account, but his party, his committee, his country, are still holding the bag. In the process he became the poster boy for a witch hunt, the physical embodiment of a reckless crusade to oust a president. Still, did he take any pause? Any time for self-reflection? Perhaps to work on USMCA, prescription drug prices, or any of the myriad issues his salary pays for? Of course not. Instead he ran headfirst into another fantasy. And dragged the country along for the ride.

When Schiff’s dream of hanging an impeachment on non-existent Russian collusion evaporated, rather than take time to atone for his charade, he fabricated another one. He chose to champion the cause of a not quite “whistleblower”, a registered Democrat partisan, with a second, third, or fourth-hand account of an innocent phone call between the U.S. and Ukrainian presidents. How do we know it was innocent? Well, first there is the transcript of the call, completely devoid of illegality. Second, there is poor Adam Schiff’s deliberate, unabashed, falsifying of that very transcript from the House chamber, to the entire country. If Congressman Schiff had the incriminating evidence, would he not have used that, rather than resorting to pure fantasy disguised, after the fact, as parody? Instead he chose to damage his own dreams of impeachment because he had no one around to stop him. No one to save him from himself.

After Schiff was caught in the now famous YouTube video trying to obtain damaging material on President Trump from Ukraine, one would think he would at least try to be a little more cautious and circumspect when creating a scandal. But alas, such is not the case. It has now been reported, by multiple sources, that Schiff had, for over a month, knowledge of the alleged “whistleblower” and his unsubstantiated claims. In fact, his office was in direct contact with the “whistleblower”. Even more, Schiff actually helped the “whistleblower” obtain the attorney that drafted the complaint. Knowledge and facts he naturally withheld from his own committee. Does any of Schiff’s duplicity do him any favors in his quest for his white whale of impeachment? Of course not, that is precisely why he desperately needs someone to sit him down and help him with his self-destructive tendencies.

Now that the White House is compelling Speaker Pelosi and the rest of the House to actually vote on the ridiculous impeachment inquiry, the latest fantasy could very well whither and die. Failing that, congressional Republicans will receive subpoena power equal to that of the Democrats, which will ultimately decimate the House Democrats’ non-committal impeachment lark. In the worst case, or possibly best case, should the House actually muster the courage for an actual impeachment, an exonerating trial in the Senate would come almost immediately before the 2020 election. All of this is well and good for the president, but it doesn’t really do much for the ‘Schiff Problem’. He would still need somebody watching over him. A Jiminy Cricket of sorts. Someone to steer him away from his more insidious impulses.

It’s hard not feel bad for Adam Schiff. Like the middle reliever, called up from the minors in the middle of a pennant race. Asked to do too much. Trying to do too much. Not ready for the bright lights and tremendously susceptible to unforced errors. It’s time for his friends in Washington to give him an intervention.