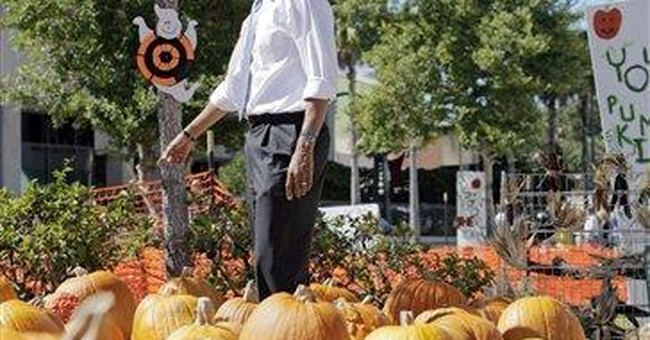 If Barack Obama is not a socialist, he does the best imitation of one I've ever seen.

If this is not the socialist redistribution of wealth, what is it?

A steeply graduated income tax has always been the preferred weapon of the left for bringing about socialist equality. Indeed, in the "Communist Manifesto" of 1848, Karl Marx was himself among the first to call for "a heavy progressive or graduated income tax."

The Obama tax plan is pure Robin Hood class warfare: Use the tax power of the state to rob the successful and reward the faithful. Only in Sherwood Forest it was assumed the Sheriff of Nottingham and his crowd had garnered their wealth by other than honest labor.

Biden: "Are you joking? Is this a joke?"

Biden's better defense, however, might have be the "Tu quoque!" retort: "You, too!" -- the time-honored counter-charge of hypocrisy.

Indeed, how do Republicans who call Obama a socialist explain their support for Social Security, Medicare, Medicaid, food stamps, welfare and the Earned Income Tax Credit? What are these if not government-mandated transfers of wealth to the middle and working class, and the indigent and working poor?

Since August, the Bush-Paulson team has seized our biggest S&L, Washington Mutual, and largest insurance company, AIG. It has nationalized Fannie and Freddie, pumped scores of billions into our banks, bailed out GM, Ford and Chrysler, and paid the $29 billion dowry for Bear Stearns to enter its shotgun marriage with JPMorgan Chase.

And with federal, state and local taxes taking a third of gross domestic product, and government regulating businesses with wage-and-hour laws, civil rights laws, environmental laws, and occupational health and safety laws, what are we living under, if not a mixed socialist-capitalist system?

Norman Thomas is said to have quit running for president on the Socialist ticket after six campaigns because the Democratic Party had stolen all his ideas and written them into its platforms.

Is the old republic then dead and gone, in the irretrievable past? Are we engaged in an argument settled before we were born?

In his 1938 essay "The Revolution Was," Garet Garrett wrote:

"There are those who think they are holding the pass against a revolution that may be coming up the road. But they are gazing in the wrong direction. The revolution is behind them. It went by in the Night of the Depression, singing songs to freedom."

Nevertheless, there is a difference not just of degree but of kind between unemployment compensation for jobless workers, welfare for destitute families, and confiscating the income of taxpayers who earned it -- to hand out to chronic tax consumers who did not.

This last is the socialism Winston Churchill called "the philosophy of envy and gospel of greed." And it is this suggestion of socialist ideology in Obama's words that has produced the belated pause by a nation that seemed to be moving into his camp. What did Barack say in 2001?

This is ideology speaking. This is the redistributionist drivel one hears from cosseted college radicals and the "Marxist professors" Obama says in his memoir he sought out at the university. It is the language of social parasites like William Ayers, Bernardine Dohrn and Father Pfleger.

Enforced egalitarianism entails the death of excellence. For it seizes the rewards that excellence earns and turns them over to politicians and bureaucrats for distribution to the mediocrities upon whose votes they depend. One need not be Ayn Rand to see that Barack has picked up from past associates utopian notions that have ever produced nightmare states.

Lindsey Graham Says There Are at Least 51 Votes for More Witnesses and the Democrats Aren't Going to Like Them
Redstate
Ron Johnson to Bolton: How about you open that yapper of yours and give us some clarity on this Ukraine thing
Hotair