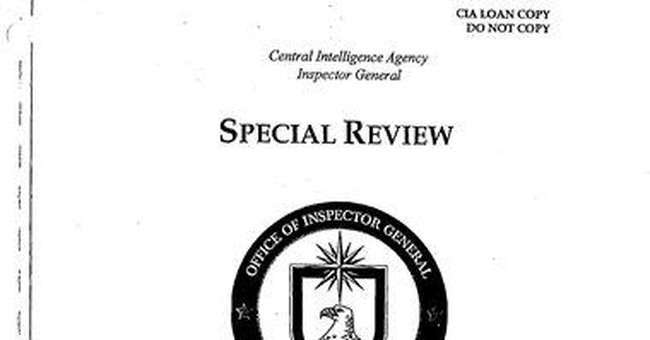 GEORGETOWN, S.C. -- "The Washington Compost" is mercifully less than ubiquitous down here in the Carolina Lowcountry. That's why I was a bit surprised by the comments of a fellow customer at the Independent Seafood pier when I went to fetch some fresh catch for dinner. "I'm outraged by the classified information on our intelligence operations in that paper," he said. I quickly surmised he was referring to the much-hyped "Top Secret America" series in The Washington Post. Very upset by what he had read in the WaPo, he didn't hesitate to tell me why.

"I'm calling my congressman and senators about this," he volunteered. "That map they have shows there are more than 2,200 federal government facilities and another 7,000 locations where contractors do classified intelligence work here in the United States. There are only 65 of 'em here in South Carolina? That's an insult!"

Probably not the reaction the writers, editors and publishers at the Post expected when they set out -- two years ago, if their hyperbolic self-promotion is true -- on a mission to expose "an enterprise so massive that nobody in government has a full understanding of it." In breathless movie-promo prose, the flagging paper's editors claim they have discovered that America's "top-secret intelligence complex" is "bloated," "redundant," "unaccountable" and "often inefficient and mostly invisible." And this is "news" to The Washington Post? Those adjectives describe most of our federal government.

The three-part series -- and a ponderously inefficient, frequently offline website -- purports to offer readers "a real, granular ("granular," as in grainy or coarse?) understanding of the scale and breadth of the top-secret world" of U.S. intelligence operations. For those unfamiliar with the geography of America the Beautiful, "a user can also see the cities and towns where the government conducts top-secret work in the United States." If you're looking for an Abu Ghraib in Augusta, a biological weapons lab in Bangor or super-spy sites in Sioux City, think again.

Most of the WaPo's "Alternative Geography" of "top-secret clusters" and "contractor concentrations" are precisely where any thinking person would expect them to be. Now, thanks to this "groundbreaking investigative reporting," hostile intelligence services, criminal networks and drug cartels can spare themselves the long hard drive to do harm or recruit a new sleeper cell in Casper, Wyo. Everyone in town knows who works at the city's sole "government organization performing top-secret work" -- and they all pack heat.

Enemy bean counters had to be shocked to learn from the Post that the U.S. "intelligence system" budget is now more than $75 billion -- more than double what it was before the 9/11 attacks. America's allies and adversaries no doubt are stunned to realize that "more than 854,000 people have top-secret clearances" and that 265,000 of them are evil contractors. And those who intend to commit violence against us are no doubt comforted by the revelation that some of these nefarious characters help the National Security Agency "intercept and store 1.7 billion e-mails, phone calls and other types of communications" daily -- but there are too few interpreters or cryptologists to analyze all the data.

But wait. There's more. The Post piece isn't all cold, hard numbers and dollars. The paper evidently wanted to put a human face on its drawn-out story and help readers understand there are real people involved in these shadowy activities. In copy that reads like poorly written pulp fiction or the opening of a personal advice column, the authors describe meeting "a businesswoman" at a bar in Maryland near "super-secret" Fort Meade:

"She's been living with one of those secretive men for 20 years. He used to work at the NSA. Now he's one of its contractors. He's been to war. She doesn't know where. He does something important. She doesn't know what. ... She says she fell for him two decades ago and has had a life of adjustments ever since. ... 'I'm the interloper,' she says. 'It bothers me he never takes me traveling, never thinks of anything exciting to do. ... I feel cheated.'"

There's no information on how this deeply moving personal account tucked into the WaPo expose has affected Washington policymakers. Sen. Dianne Feinstein, D-Calif., chairwoman of the Senate Select Committee on Intelligence, must have read some of the story. On July 20, she told retired Air Force Lt. Gen. James Clapper -- the Obama administration's nominee to become the next director of national intelligence -- he had to rein in "the enormous growth" and eliminate "sprawl, overlap and duplication" in the 16 agencies of the U.S. intelligence community and the contractors supporting their work.

Unfortunately, neither Feinstein nor the "muckrakers" at the Post acknowledge why these problems continue to grow: We're in a war we can't fight without contractors. Clapper would be the fourth DNI in five years. In those same five years, Congress has failed to pass a single intelligence authorization Bill. Aside from the U.S. military, intelligence agencies largely are funded by annual supplemental appropriations that do not permit the hiring of new federal employees -- even if the government could recruit and retain adequate numbers of competent people. If the essential work of these agencies is going to get done, it has to be performed by "auxiliaries" on annual contracts.

Finally, what all involved seem to ignore is that many of these contractors or auxiliaries actually deliver. Their most pressing challenge -- particularly those involved in human intelligence collection -- is getting the information to those who can act on it.

Apparently, these facts weren't sensational enough to make the WaPo's "Top Secret America" headlines. For that reason, the names of those who authored it have been omitted from this column -- just in case they want to go into the witness protection program at a previously undisclosed location.