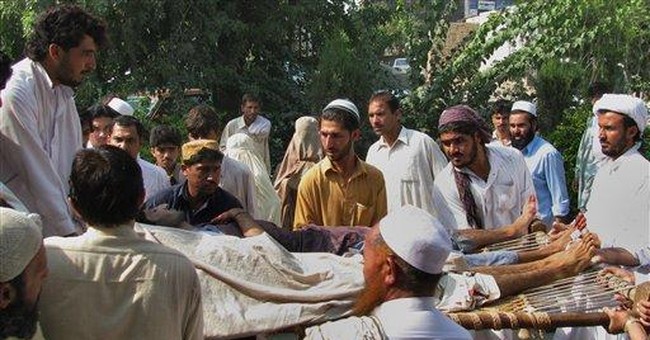 KABUL -- Our Fox News' "War Stories" team is cleaning our gear and packing up to go home. The special operations teams that "hosted" us for a half-dozen carefully planned and executed raids against the Taliban have showered us with patches, "challenge coins" and mementos accumulated since we arrived last month. We even got to shower ourselves. While on operations, we've shot hours of videotape of their backs and legs and on their bases and taken hundreds of photos with their cameras because we're not allowed to show most of their faces.

On our last night "in country," we sat down with them in their operations center to review the footage we had shot to ensure that whatever we put on the air in the days ahead will neither jeopardize allied lives nor divulge forthcoming operations. While we were scanning through the "tapes," one of our hosts informed us that The Washington Post had published a slightly redacted version of Gen. Stanley McChrystal's 66-page classified "assessment" on where we are headed in Afghanistan.

The Post's breathless lead: "McChrystal: More Forces or 'Mission Failure': Top U.S. Commander For Afghan War Calls Next 12 Months Decisive." The article continues, "The top U.S. and NATO commander in Afghanistan warns in an urgent, confidential assessment of the war that he needs more forces within the next year and bluntly states that without them, the eight-year conflict 'will likely result in failure.'"

Within hours of the assessment's being published, the camp was buzzing with speculation that if Gen. McChrystal does not receive the troops and resources he needs, he will resign. It was a rumor that the popular general quickly quashed, but the very fact that it spread so quickly indicates how uncertain things are here in the shadows of the Hindu Kush.

Much of the growing ambivalence here in Afghanistan is the consequence of last month's deeply flawed presidential elections -- and a significant spike in U.S. casualties. Nobody here seems to believe that the Aug. 20 ballot was a fair contest, and most observers appear to view the government of Hamid Karzai as hopelessly corrupt. The jump in U.S. casualties -- mostly caused by sending coalition forces into areas that have been Taliban safe havens -- is irrefutable. Unfortunately, the White House is broadcasting mixed signals that aid and abet the Taliban hope that the U.S. and our allies simply will go away and leave the country to them.

In a March 27 speech -- his most recent unequivocal statement on the war -- Mr. Obama announced that the U.S. and NATO were intent on pursuing a "counterinsurgency strategy" that is "fully resourced." He also approved the deployment of an additional 21,000 U.S. troops by the end of this year -- bringing total U.S. troop strength in Afghanistan to 68,000.

Now all that is apparently up for reconsideration within the Obama administration, including Gen. McChrystal's request for more "urgently needed combat power" to pursue the previously endorsed "counterinsurgency strategy." That additional combat power is unlikely to come from NATO. This week, Italian Prime Minister Silvio Berlusconi -- reacting to the murder of six Italian soldiers by a suicide bomber here in Kabul -- announced that it is time for all of us to get out of Afghanistan.

Secretary of State Hillary Clinton amplified the discord by suggesting that more U.S. troops are not the answer. In a PBS interview, she claimed, "There are other assessments from very expert military analysts who have worked in counterinsurgencies that are the exact opposite" of Gen. McChrystal's. That has to make the Taliban leadership, hiding out in caves along the Afghanistan-Pakistan border, feel all warm and fuzzy.

Here's the bottom line, which is based on months in the field with U.S. and NATO troops and Afghanistan's fledgling security forces: This is a fight we can and must win. It is a classical counterinsurgency campaign, not rocket science. Success requires U.S., NATO and coalition forces to protect the Afghan people from the Taliban while we train and equip sufficient numbers of Afghan soldiers and police to take responsibility for their own security.

To accomplish that mission, more U.S. and coalition combat troops and trainers -- and the airlift to move them around and resupply them -- will have to be sent to Afghanistan. We also desperately need better human intelligence on the Taliban and their supporters. From what we have seen on this trip, that last requirement is now being met -- not by the allied military or intelligence agencies, but by special agents and intelligence specialists of the Drug Enforcement Administration.

DEA operations in Afghanistan are an untold success story. In the year since we were last here, the tiny agency has begun delivering superior human intelligence, analysis, mobility and firepower to the fight. Its ability to use local informants to verify other intelligence is unparalleled -- and brings "value added" to every operation it leads. Because the Taliban are heavily dependent on opium for financing their insurgency, the DEA has become a "force multiplier" for Gen. McChrystal. Before pulling the plug on our mission in Afghanistan, the White House ought to listen to the "other counterinsurgency experts" -- at the DEA.