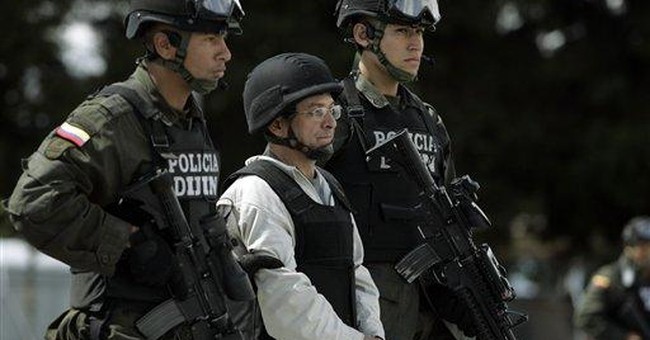 BOGOTA -- He calls himself "Cesar," but his real name is Gerardo Aguilar Ramirez. As "comandante" of the 1st Front of the Revolutionary Armed Forces of Colombia -- and one of the top 10 leaders of the hyper-violent FARC -- he has well-earned credentials as a drug-dealing terrorist with a penchant for trading in hostages. This Thursday, U.S. Drug Enforcement Administration agents put Ramirez, aka Cesar, in shackles, marched him aboard an aircraft here in Bogota, and took him to the U.S. to stand trial for his crimes. Our Fox News' "War Stories" team was here to record the event -- and a whole lot more -- so that we can tell the story about the heroes who are waging -- and winning -- the shadowy fight against narco-terror.

That may not be a familiar term to most of us, but narco-terror is nothing new to the 5,300 special agents of the DEA -- or the allies they have made in 63 nations around the world. Here in Colombia, which is the source of half the world's cocaine, FARC thugs, such as Cesar, have made themselves "high-value targets" in the twilight struggle against illegal narcotics and terrorism. When he was arrested July 2, 2008, during a dramatic hostage rescue operation, Cesar was holding 15 hostages; among them were Colombian presidential candidate Ingrid Betancourt and three American citizens.

Betancourt was taken hostage by the FARC Feb. 23, 2002, while she was campaigning for the Colombian presidency. The three American civilians were taken hostage Feb. 13, 2003, when their U.S. government drug-surveillance aircraft crash-landed in Colombia's southwestern Caqueta province -- not far from a FARC stronghold. Guerillas quickly surrounded the wrecked plane and proceeded to murder the American pilot, Tom Janis, and a Colombian intelligence specialist, Sgt. Luis Alcides Cruz. The remaining three Americans -- Marc Gonsalves, Thomas Howes and Keith Stansell -- were taken hostage and hauled off into the jungle. They were about to endure an absolutely horrific experience.

Efforts to find the missing Americans began immediately after their plane went down. Searchers found the wreckage and the bodies of the two dead crewmen within hours. More than a dozen members of the Colombian National Police and soldiers were killed and wounded as they searched for the hostages. A special U.S.-Colombian intelligence, military and police task force -- focused solely on the hostages -- was up and running in days. At a U.S.-controlled site, intelligence specialists were "surged" into Colombia to assist in finding the missing men. One senior intelligence officer told me this week: "We deployed every possible intelligence platform and expert available from every possible agency in this effort. It took longer than anyone wanted for it all to work."

Official and unofficial emissaries from the U.S., France, the European Union and the United Nations descended on the U.S. Embassy in Bogota to assist in bringing about the safe release of the Americans. Colombian President Alberto Uribe, whose father was murdered by the FARC, was pilloried in the domestic and international press for not doing enough to free the more than 1,000 Colombians held hostage by the FARC or to free Betancourt, who is a dual-national French-Colombian citizen.

A senior U.S. official here in Bogota told me this week: "Meeting with the families of those being held is always difficult for all involved. The hardest part is not being able to tell them everything we were doing to find them and rescue their loved ones."

For more than five years, Cesar tried to barter the hostages in exchange for the release of FARC terrorists jailed in the U.S. and Colombia, political concessions, the promise of safe havens, and even other hostages. Throughout the time they were held, all the hostages suffered excruciating privation -- hunger, lack of medical attention, exposure and physical abuse. Constantly moved from one FARC camp to another, they never knew whether they eventually would be released or killed.

Operation Jaque -- which rescued the three Americans, Betancourt and 11 Colombians, one of them held by the FARC for more than 10 years -- also netted Cesar and his "deputy comandante." It was a stunning success thanks to the close cooperation and relationships that had been forged by a host of U.S. government agencies and their Colombian counterparts.

The very fact that Cesar has been extradited to stand trial in the U.S. is a tribute to the work of thousands of selfless Americans and Colombians over the past two decades. But credit should be given where it's due. When Cesar was frog-walked across the tarmac at Reagan National Airport on Thursday night, he was "escorted" by U.S. DEA special agents.

It was Gerardo Aguilar Ramirez's first trip to the United States. Thanks to the DEA, he won't be visiting Disney World.