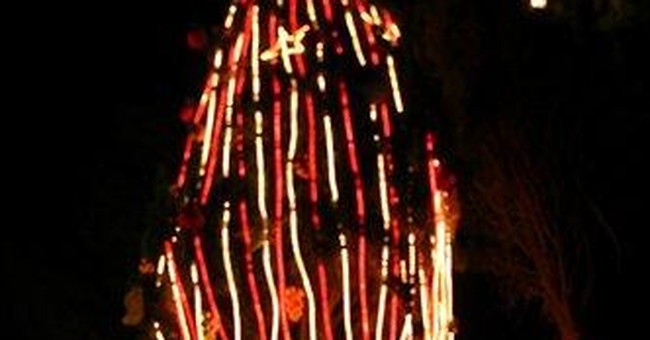 WASHINGTON -- It's the "the holiday season" -- the politically correct euphemism for this time of year, when we're supposed to demonstrate the "spirit of the season" by going shopping. We do this so that we can help retailers hit their year-end sales targets. Shopping, we are told, stimulates the economy, and what's good for the economy is good for all of us.

Our national day of Thanksgiving has become the official kickoff for a year-end buying spree, which is supposed to continue through Christmas, er, excuse me, "the holidays." According to the mainstream media, this year we consumers dropped the ball.

If we believe news reports and polls, the "spirit of the holidays" has been "dampened" by the economic downturn, a jump in unemployment to 6.7 percent, a steep drop in home sales and rising foreclosures. We're told that "consumer confidence continues to decline" and that pay increases are slim or nonexistent -- except in Congress, where a pay raise for the members is generous and automatic.

Perhaps it is time for us to concentrate on something other than the economy and examine the true meaning of "the holidays" -- Christmas. Last week, Pope Benedict XVI encouraged us "to focus on the spiritual meaning of Christmas and to welcome into our hearts the hope brought by God's coming among us as man."

Interestingly enough, those were the very ideals that motivated our nation's Founders. Whether today's politically correct crowd wants to acknowledge it or not, those who forged this nation out of a wilderness were overtly Christian -- and so full of hope that they were willing to risk all to create a completely new form of government. In less than a month, we will again witness the results of what America's Founders created -- the peaceful transition of political authority in our capital.

Those who remind us regularly how bad things are right now ought to recall what Christmas of 1777 was like for the Continental Army encamped in Valley Forge, Pa. Eyewitnesses record that on the occasion, George Washington prayed with his troops for relief from their suffering and to "Fulfill in us and through us Thy glorious intention: that Thy peace, Thy love and Thy justice may enter into the regeneration of the world."

In that same spirit, we all ought to thank God during this Christmas season for those who defend us today. At this very moment, there are more than a quarter-million young American soldiers, sailors, airmen, guardsmen and Marines serving far from home. They have volunteered to forfeit the warmth and affection of loved ones to protect the rest of us from those who would do us terrible harm. Instead of whining about how tough things are at home, we need to pray for their safety and continued success.

While we're at it, before rushing out to a post-Christmas sale, we need to pray for our president and our Congress. Let's hope they will be reminded that while it truly is better to give than to receive, they need to be careful about giving too many bailouts and handouts, for the more they give the more they eventually will have to take from the next generation of taxpayers -- our children.

And for all the postmodern Christmas deniers: You may not like the idea of Christmas being celebrated as the birth of Jesus Christ, the Lord and Savior of mankind, but that doesn't make it untrue. In hopes that you, too, will come to experience the joy and peace that comes with that acceptance, I offer you the word of Linus -- a very secular creation of Charles Schulz, the originator of the "Peanuts" cartoon series. Challenged by Charlie Brown to explain "the true meaning of Christmas," Linus responds by quoting Luke 2:11-14:

"'Do not be afraid. I bring you news of great joy that will be for all the people. Today in the town of David, a Savior has been born to you; he is Christ the Lord. This will be a sign to you: You will find a baby wrapped in cloths and lying in a manger.' Suddenly, a great company of the heavenly host appeared with the angel, praising God and saying, 'Glory to God in the highest, and on earth peace to men on whom His favor rests.'"