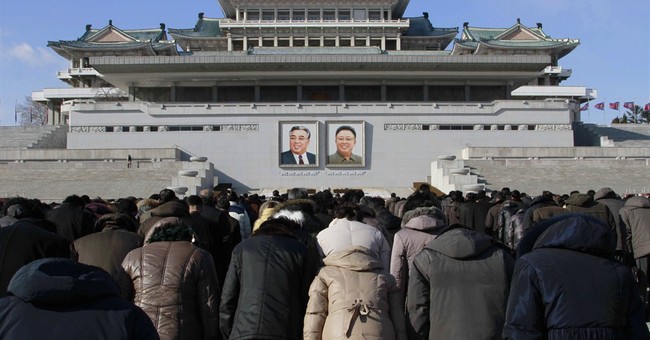 North Korea-US: Special comment. After the Korean War, as conditions settled in South and North Korea, the North persisted in sending infiltrators into Seoul to destabilize the government. One of the most often reported tactics was to attack a movie theater. North Korean infiltrators regularly attended the movie theaters in Seoul to roll hand grenades in the aisles to kill as many people as possible. Attacks in theaters occurred weekly at times in the late 1950s.

United Nations-North Korea:Update. Member countries of the United Nations General Assembly on Thursday passed a resolution authorizing the Security Council to refer North Korea to the International Criminal Court (ICC) for crimes against humanity, as alleged in a UN inquiry report released in February.

There were 116 votes in favor of the resolution, with 20 against and 53 abstentions. The resolution, which was drafted by the European Union and Japan, was approved last month by the 193-member assembly's Third Committee, which deals with human rights.

Comment: Every year the General Assembly votes on resolutions that criticize North Korea, Iran and Syria for their lack of respect of human rights. This is one of the few times that the General Assembly has referred a member to the ICC. It might represent a major step forward in the maturity of the organization because the allegations against North Korea are not new. North Korean disrespect for human dignity is longstanding, systemic and pervasive, including prison camps, systematic torture, starvation and killings comparable to Nazi-era atrocities.

The only mitigating factor is that living conditions for people who are not members of the Korean Workers' Party or the Korean People's Army are not much better than those for people in the political prisons. North Korea remains and is proud of being the last Stalinist state.

What seems to offend the majority of the General Assembly is that the atrocities of the North Korean regime originate with the Kim family itself and are institutionalized throughout the government and party systems.

One commentator observed that the vote is largely symbolic and non-binding. That comment minimizes the significance of a vote by an overwhelming majority of the members of the United Nations that North Korea stands alone as the country whose government abuses its people more than any other on the planet.

This is the inheritance of Kim Jong Un. The tragedy is that this western educated leader had an opportunity to change the system, but has proven too weak.

North Korean reaction. "My delegation totally rejects the resolution," North Korean delegate An Myong Hun told the assembly. "It is a product of a political plot and confrontation." He said that Pyongyang was ready for "dialogue and cooperation in the field of human rights," but rejected the use of the issue as an instrument for regime change.

Comment: The UN Security Council is expected to discuss the resolution on Monday, but China probably would veto a motion to refer North Korea to the International Criminal Court.

Cameroon: The Cameroon military reported that it killed at least 116 Boko Haram fighters during a fight in northern Cameroon on 17 December near the border with northeastern Nigeria.

The incident began when the militant group tried to attack the Cameroonian town of Amchide, a military spokesman said. One Cameroonian soldier was killed, and another was missing after the attack. Boko Haram destroyed two trucks and stole a third.

The Cameroonian defense spokesman said the military believes its artillery also inflicted unspecified damage to Boko Haram on the Nigerian side of the border during the fight. "Our defense forces rigorously fought back this barbaric attack, and forced the enemy to retreat," a Cameroonian government spokesman said.

Comment: The contrast in military performance between the Cameroonian and Nigerian forces remains sharp. The Nigerians blame the Cameroonians for not ousting Boko Haram from the border area. Nevertheless, the Cameroonians consistently kill more terrorists and sustain fewer casualties.

Nigeria: Boko Haram insurgents kidnapped at least 185 women and children, and killed 32 people in a raid in northeastern Nigeria on Sunday, 14 December, local officials and residents said. Gunmen in pickup trucks attacked the village of Gumsuri, just north of Chibok. They shot the men and herded the women and children into trucks after burning most of the village.

.Lack of outside communications delayed news of the attack, according to local officials. Previous Boko Haram attacks disabled telecommunications towers in the area.

Comment: Recently, daily surveys of the Web failed to find new reports of Boko Haram's attacks, suggesting a possible lull. Destruction of the communications infrastructure in the northeast explains the apparent lack of attack reporting. Its effect is to distort the security picture for outside observers and to inhibit rapid responses by Nigerian security units, were they even available.

Chibok is the location from which Boko Haram kidnapped 276 school girls in April. Gumsuri's proximity suggests some local vendetta is at work. The attacks almost seem intended to wipe out a local tribe or clan. That is the historic significance of kidnapping the women and children.

This attack shows that the Nigerian government has failed to improve security in the area during the eight months since the Chibok raid.