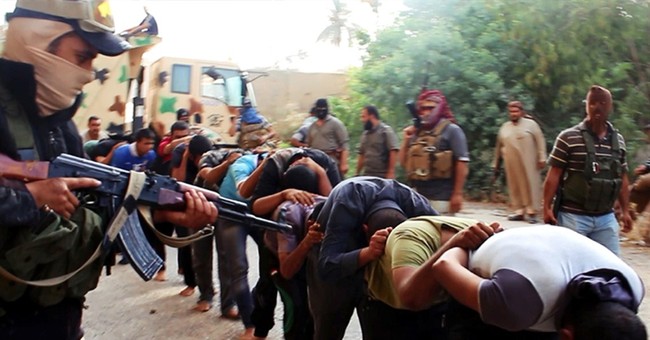 Japan: The Cabinet approved a change in the interpretation of the Constitution regarding Japan's right of self-defense. At an extraordinary meeting on Tuesday, the Cabinet approved the "Cabinet Decision on Development of Seamless Security Legislation to Ensure Japan's Survival and Protect its People."

The Cabinet said that until the reinterpretation, the government could only authorize the use of force in the event of an armed attack against Japan. Under the new interpretation, Japan has broadened its definition of self-defense to include the right to collective self-defense.

The Cabinet said the government has concluded that the Constitution should be interpreted to permit the use of only necessary force for self-defense under certain conditions. It said these include an armed attack on a foreign country that has close relations with Japan, which poses a clear threat to Japan's survival and which threatens a fundamental overturning of people's rights.

Comment: The decision represents a milestone in Japanese strategic thinking. The idea of collective self-defense is not new. It has been debated for many years. For at least 20 years the US has urged Japan to broaden its definition of self-defense as a means of shifting more of the burden of Alliance costs and responsibilities to Japan.

The milestone is Prime Minister Abe's political judgment that the public supports adoption of a more assertive defense policy. This means that one of the cornerstones of international relations in the Pacific region that the US laid after World War II has been overturned. Asians are taking more responsibility for Asian security.

North Korean missile launches and nuclear tests have been influential in reshaping Japanese official and public attitudes about defense. Now, if North Korea threatens South Korea and the US by threatening to shoot a missile at US bases in Japan, Japan can act in self-defense as an Alliance member without waiting to be damaged first.

This is a particularly bad day for North Korea because its strategists can no longer presume that Japan would wait to be attacked before engaging North Korea in combat.

South Korea-North Korea: The Republic of Korea issued a short, formal statement rejecting North Korea's special proposal as insincere. It said in part, "If North Korea truly wants peace on the Korean Peninsula, it should not only stop its slander and provocative threats, but also show sincerity on resolving the nuclear issue, which is a fundamental threat to peace on the Korean Peninsula."

Comment: The North Koreans knew their proposal would be rejected and the South Koreans knew they knew. This pattern of exchange sometimes is the prelude to a provocation, justified by South Korea's rejection. The North Koreans won't stage an event that would embarrass Chinese President Xi during his visit to Seoul on Thursday, but they probably will use the exchange to coach Chinese leaders that the South rejects peace proposals.

Most Iraqi news sources reported continued slow government progress to recover territory north of Baghdad in Salah-al-Din Governate and in Diyala, which is northeast of Baghdad. Government forces lost no ground in Anbar, which is west of Baghdad.

Islamic State of Iraq and the Levant (ISIL). In an audio message today, ISIL's leader called on Muslims to travel to Iraq and Syria to help build an Islamic state. Abu Bakr al-Baghdadi called on Muslims to immigrate to the "Islamic State", saying it was a duty. He made a "special call" for judges, doctors, engineers and people with military and administrative expertise.

Comment: ISIL is short of manpower. If government claims of ISIL casualties are close to accurate, ISIL is losing several hundred fighters a day. Government losses are understated, but ISIL does not appear capable of surviving that level of attrition.

Political. The first session of the new Council of Representatives (COR) on 1 July was supposed to be devoted to the swearing-in ceremony for 255 deputies and other housekeeping details associated with leadership. However, candidates for the posts of COR speaker, president, and prime minister were not nominated.

The session broke up in confusion and disarray. Lawmakers surfaced old grievances. Many were unfamiliar with the rules and the Constitution. Others insisted on threatening each other. After a break called to calm tempers, many Sunni and Kurdish deputies refused to return so that the session had to end for lack of a quorum.

The presiding deputy said the Council would reconvene on 8 July, provided the deputies can agree on the three leadership positions.

Comment: Several Iraqi commentators wrote that the mood was against al-Maliki, except in al-Maliki's political bloc, which is the largest single bloc in the council.

Turkey-Kurdistan-Iraq: Deputy Prime Minister Bulent Arinc said today that the Turkish Government opposes the separation of the Kurdistan Region from Iraq. He said, "Iraq should not be divided" and that "there is a state and a constitution in Iraq."

Comment: Arinc's formulation remains the official public policy of Turkey. Turkish policy appears to be disjointed. Turkey aided and abetted ISIL while it stayed in Syria. Now that ISIL refuses to recognize borders, Turkey must now oppose its proxy.

The leaders in Ankara don't seem to know what to do about the Iraqi Kurds to whom they are indebted for blocking ISIL's advance. The Islamic State claims Turkey too. If Iraq fractures, Turkey's unofficial support for a strong Iraqi Kurdistan might become official policy.

Ukraine-Russia: Russian President Putin condemned Ukraine for ending a truce with separatist rebels in the east. He said Ukrainian President Poroshenko must now bear direct responsibility for the conflict.

Putin vowed he would continue to defend ethnic Russians abroad, using all means available from humanitarian aid to "self-defense".

Putin also said the West was using the Ukraine crisis to destabilize the whole region as part of a policy to "contain" Russia. "We need some kind of insurance net around all of Europe so that the Iraqi, Libyan, Syrian - and unfortunately we have to mention the Ukrainian - scenarios do not become a contagious disease."

Comment: Poroshenko betrayed Putin. Relations are now reset. The crisis enters a new phase. Russia will even the score.

Nigeria: At least 56 people have been killed in an explosion at a market in Maiduguri in northeastern Nigeria, a medical worker said. The explosives were reportedly hidden in a vehicle carrying charcoal.

Comment: More Boko Haram work. The periodicity of attacks is daily. The frequency will soon be two or more a day.

NightWatchSpecial Administrative Announcement. Changes are coming to NightWatch, because of increased publication expenses and because it is time. We are excited about the opportunity to review our product and to make improvements that will continue to add value for our Brilliant Readers. Since we are at a decision point, we judge it essential to ask our Readers about the publication and to invite you to provide your ideas and suggestions for improving it. We are preparing a brief survey which will be distributed as a special edition. Your responses will help shape the future of NightWatch. More to follow.