Iraq is Looking More, And More, Like Syria Everyday 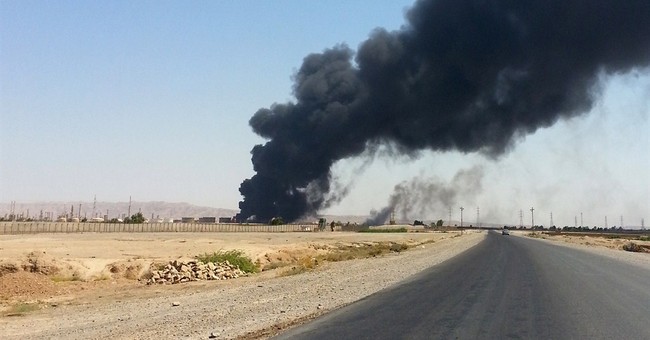 North Korea: Another effort to attract tourists. The Korean Central News Agency published a decision by the Presidium of the Supreme People's Assembly on international tourism.

Comment: Promotion of international tourism by creating tourist zones was one of the late Chang Song-taek's ideas that Kim Jong Un has stolen in a downsized form. Kim thinks North Korea can become a winter sports haven, like Switzerland, but in Northeast Asia. To that end he built a ski resort near Wonsan.

The purpose is to finance his other questionable moneymaking schemes and the nuclear weapons program. Kim Chong-il tried to promote tourism too, but all his plans failed, mostly because North Korea lacks a stable-minded leadership; is unpredictable in its international relations; and its amenities for tourists are substandard.

Afghanistan: Voter fraud. Presidential candidate Abdullah Abdullah called for a halt to the vote count from the 14 June run-off election and announced he is boycotting the Independent Election Commission.

Abdullah charged that boxes of ballots are being counted from districts in which no voting was held because of security concerns. "Organized fraud has taken place in some areas, which is in contempt of the people of Afghanistan's rights," he said

Comment: The protest implies that Abdullah suspects he will lose the run-off election through voter fraud. He won the first round, but did not obtain a majority, thus requiring the run-off.

A recent poll taken after the first round election and before the run-off showed that the voters favored Ashraf Ghani, the other contender, by a substantial margin. Ghani is an educated economist and former Finance Minister. He is the favorite of the Pashtuns. Abdullah is the favorite of the Tajiks and Uzbeks.

Some Afghan analysts predict that a government under Ashraf Ghani would perpetuate President Karzai's systematic corruption.

Special thanks to feedback from an astute and Brilliant Reader for forwarding the information about the new poll. It appears to be accurate.

Speaking on live television, Rouhani said many people had signed up to go to Iraq to defend the sites and "put the terrorists in their place". He said that veteran fighters from Iraq's Sunni, Shi'ite and Kurdish communities were also "ready for sacrifice" against these militant forces.

"Regarding the holy Shia shrines in Karbala, Najaf, Khadhimiya and Samarra, we announce to the killers and terrorists that the big Iranian nation will not hesitate to protect holy shrines," he said, speaking to a crowd on a visit to western Lorestan province.

"These terrorist groups, and those that fund them, both in the region and in the international arena, are nothing, and hopefully they will be put in their place."

Comment: This is the most explicit statement of the threshold for intervention that any Iranian official has made. Neither the Defense of Baghdad nor the survival of the al-Maliki government were mentioned.

Speaking at a gathering of Arab and Muslim leaders in Jeddah, Prince Saud urged Iraq to meet the "legitimate demands of the people and to achieve national reconciliation without foreign interference or outside agendas".

"This grave situation that is storming Iraq carries with it the signs of civil war whose implications for the region we cannot fathom," he said.

Comment: Analysts have interpreted Saud's statement as a warning to Iran and possibly to the US. The Iranian and Saudi statements showcase the existential struggle between the two branches of Islam. In that struggle Iran and Saudi Arabia itself are proxies.

Iraq: Situation update. A spokesman for the Islamic State of Iraq and the Levant (ISIL) claimed that its fighters had captured the large refinery complex at Baiji. At a press conference, an Iraqi general disputed the ISIL claim and said 40 terrorists were killed at Baiji today.

At Tal Afar, the general said that Iraqi forces continue to hold most of the town. Elsewhere low level fighting continues.

Comment: Small skirmishes continue to be reported, but details are unclear. News services reported no more towns had been captured or recaptured.

Although news reporting is limited, it conveys a few insights about the fighting. There are no clear battle lines, as in a conventional war. Success is measured in terms of neighborhoods cleared by soldiers on the ground, as in Syria. The ISIL fighters are mobile and seldom present a center of mass for an air strike. Casualties tend to be few, even when an Iraqi gunship shoots up an ISIL convoy.

Special comment: Anbar tribal chief Sheikh Ali Hatim Al-Suleimani gave an interview that Asharq Al-Awsat published today. It might be the same interview already reported, but this version contained a few more details. Sheikh Ali Hatim leads the Dulaym tribe, one of the largest in Iraq.

He said, "It is the tribal rebels who are in control of the situation in Mosul. It is not reasonable to say that a group like ISIS (ISIL), which has a small number of men and vehicles, could be in control of a large city like Mosul. Therefore, it is clear that this is a tribal revolution, but the government is trying to force us all to wear the robe of the terrorists and ISIS."

He also said that special "military committees" have been formed to "organize" the revolution. "These committees are located in the provinces of Anbar, Baghdad, Nineveh, Salah Al-Din and Diyala. They are under the joint command of tribal leaders and former army leadership."

The mention of the former army leadership is significant because of the stature of the Sheikh which gives weight to reports from several other analysts that the Ba'athists are back, under the coverof ISIL Most of these reports have been ignored in mainstream news accounts.

One commentator who analyzed ISIL's Twitter feeds reported that senior ISIL leaders know the organization is a front for a coalition of Sunni tribes and the Ba'athists, including the daughter of Saddam Hussein, behind a veneer of extremists. She resides in Jordan.

Another set of reports today focused on why the Iraqi Army broke and ran. Interviews with multiple soldiers who escaped from the north indicate the troops received orders from their immediate superiors to abandon their bases; to leave their equipment behind and to go home.

These accounts might be self-serving justifications for desertion in the face of the enemy. On the other hand, if they are accurate, what took place in Mosul was not panic, but betrayal. What makes this hypothesis somewhat plausible is information from Tal Afar, where a US-trained senior officer remains with his troops, that ISIL reportedly has been unable to hold the city.

The new information supports a hypothesis that the ISIL operation is a key part of a Sunni Arab power grab to take back Baghdad or to secede. The Kurds appear to be in on the plot, at least the secession part.

Ukraine: Update. President Petro Poroshenko announced on 18 June that Ukrainian troops will cease fire in the country's east, creating space for militia members to disarm, and for some of them to leave the country.

The Donetsk separatists have said they will not honor a ceasefire.