Thanks to Trump, Space, 'the Next Great American Frontier,' Is Within Reach

Nicholas Waddy
|
Posted: Sep 23, 2018 12:01 AM
Share   Tweet
The opinions expressed by columnists are their own and do not necessarily represent the views of Townhall.com. 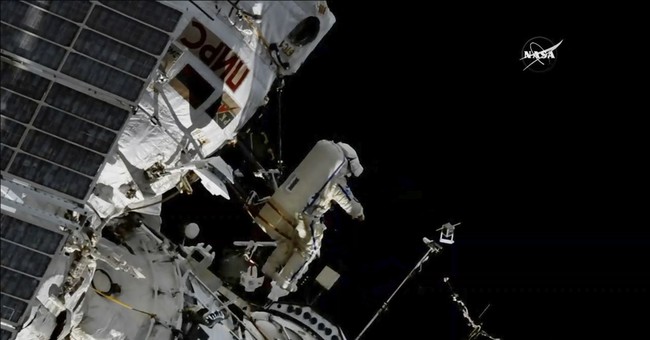 When New York Governor Andrew Cuomo recently opined that America “was never that great,” presumably he wasn't thinking of the stunning achievements of the Apollo space program, which pushed humankind beyond low Earth orbit for the first (and thus far only) time, and landed twelve Americans on the Moon between 1969 and 1972.

Apollo's success relied on a long series of revolutionary scientific and technological breakthroughs, many of them with direct applications in other fields of human endeavor, including aeronautics, communications, and computing. Indeed, our modern way of life and creature comforts would be unthinkable without NASA leading the way. More importantly, though, the Moon landings fired the imaginations of Americans and people all over the world, especially young people. They also brought Americans together, in a spirit of joy and intense national pride, in a way that perhaps no other government program has ever accomplished. Many Americans remember the day that Neil Armstrong set foot on the Moon as one of the most memorable and inspiring in their lives.

Every milestone in space, however, comes at a cost. Very occasionally, that cost comes in the form of brave astronauts, who risk their lives to advance the cause of scientific knowledge and to uphold the intrepid pioneer spirit that has always defined America. More often, that cost comes in the form of NASA budgets, which pay for all the brilliant minds and the sophisticated technology that make space travel and exploration possible.

During the peak years of the Apollo program, the federal government was devoting as much as 4-5% of its total spending, and 1% of U.S. GDP, to the “space race”. Sadly, in recent years, especially under President Obama, those numbers have dwindled. Now roughly one-half of one percent of the federal budget goes to NASA, and just one-tenth of one percent of U.S. GDP. Thus, the perception that many Americans have that we still spend vast amounts on space exploration is flat wrong.

Our next great journey in space, some would say, will come not on NASA's dime, but courtesy of private initiatives like Elon Musk's much-ballyhooed plan to settle Mars. SpaceX, Musk's rocket company, has been plagued with problems, however, and it is by no means clear that he can raise the necessary funds to pull off more than the occasional stunt in deep space, like putting an electric car in solar orbit with a dummy in the driver's seat: “Starman”. If Americans want to explore deep space and build on the momentum of Apollo, therefore, private ventures are not the answer.

No, only a robust public-private partnership, leveraging the resources of the federal government and the know-how of cutting edge companies (including SpaceX) can achieve America's destiny in space. Fortunately, this destiny is on the cusp of fulfillment, as NASA, in combination with several aerospace giants, is putting the finishing touches on the Space Launch System (SLS).

The SLS is scheduled to fly in summer 2020, and it will be the most powerful rocket in history, and the only one designed explicitly to support deep space exploration. President Trump has announced that one of its first tasks will be to aid in the construction of a space station in lunar orbit. From this base of operations, versions of the SLS will support missions to Mars and far beyond. The SLS will also transport a probe to Europa, one of Jupiter's moons, where some scientists believe that, under a vast ice sheet, an ocean may harbor primitive life.

NASA, it bears repeating, has a plan and a budget to make all this happen. It also has a track record of success. If we are to take the next step in human evolution, therefore, and strike out among the stars, it will be the SLS that will get us there.

The existing SLS program puts America on a path to further explore our solar system, to return to the Moon, and to land astronauts on Mars. All this depends on funding, however, which was anemic under President Obama, who was content to let America play a secondary role in space in the 21st century. Happily, President Trump has laid out a much more ambitious agenda for NASA, declaring that space is “America's next great frontier,” and promising to devote the necessary resources to allow NASA to achieve marvelous feats, on behalf of the American people and all mankind.

While we don't need Apollo-sized budgets to build the SLS and conquer space, we do need to realize that a nation that spends just one-tenth of one percent of its GDP on space exploration will only achieve interplanetary flight at a snail's pace. To jump-start the realization of our destiny in space, and to better serve future generations, who will benefit from the scientific knowledge and technological breakthroughs that a vigorous space program will foster, we need to spend more.