A Return to the Roots of the Free Speech Movement

Nicholas DeSimone
|
Posted: Sep 08, 2017 10:48 AM
Share   Tweet
The opinions expressed by columnists are their own and do not necessarily represent the views of Townhall.com. 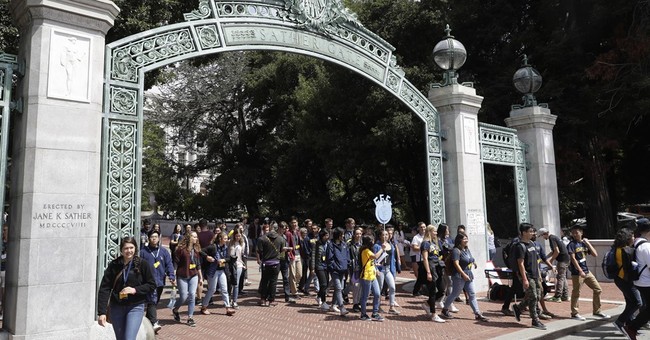 As conservative speakers make plans to exercise their free speech at UC Berkeley in September, those present at the birthplace of the Free Speech Movement have sadly witnessed its change over time.

Manhattan Institute’s Senior Fellow Sol Stern was there during the original Free Speech Movement in the 1960s. During a recent exclusive interview with Stern, reminiscing of a time when opposing ideas were welcomed at Berkeley, Stern states, “We [The New Left] believed we had the best ideas…we welcomed the challenges in debating our ideas with conservative professors on campus. You wouldn’t have dreamed of excluding them.”

Today, the exclusionary tactics used by the administration are veiled behind ambiguous security concerns. Conservative columnist Ben Shapiro was invited to speak at Berkeley in September by the College Republicans and Young Americans Foundation but with this invitation came a hefty “security fee” of $15,000 for Shapiro to speak on campus.

Following an invitation from The Berkeley Patriot, a student-led conservative magazine, controversial right-wing speaker Milo Yiannopoulos has vowed to return to Berkeley for a “Free Speech Week” after his last speaking engagement in February ended when left-wing extremists erupted in violent protest and caused $100,000 worth of damage. The Berkeley Patriot has also invited conservative commentator Ann Coulter and President Trump’s former chief strategist Stephen Bannon to the Free Speech Week. It was in April when Coulter’s first attempt at speaking at Berkeley was cancelled amid “security concerns” after the leftist backlash from Yiannopoulos’ prior appearance. The free speech issues Berkeley is currently confronting today appear to be a faint glimmer of types of battles the Free Speech Movement was founded on in the 60s.

The real issue that precipitated the Free Speech Movement was about the immoral actions of the Berkeley administration. The business community and political interests that were concerned over growing student support for the Civil Rights Movement exposing employment discrimination were pressuring the university during that time. The university made the ruling that the sidewalks in front of the Telegraph Ave entrance to the campus were the property of the university and not the city of Berkeley so now the administration could enforce their university rules, which restricted the students’ free speech. The students resisted and the use of force was applied to remove them, which led to the movement exploding. This was a battle worth fighting.

Today, instead of students and the administration standing up against a true injustice, they’re standing up against diversity of ideas by making it difficult for conservative speakers to share their viewpoints. Berkeley doesn’t seem to have a problem celebrating diversity as long as it’s their version of diversity being celebrated. Blocking conservative speakers is only a testament to that statement. Stern recollects the importance for those diversity of ideas when stating, “to go back to the Free Speech Movement, we vilified Clark Kerr for some of his ideas of the multiversity. But in retrospect, I wish we had a few more Clerk Kerr’s today.”

Some might argue that Berkeley’s decision to block conservative speakers is justified. However, UC Berkeley is a public institution that currently receives $425 million in federal tax dollars to essentially censor free speech ideas that some of those same taxpayers might agree with. Perhaps it’s up to the legislators to step in and pull back this funding until Berkeley begins promoting the marketplace of ideas again. “Eventually, if the legislators start acting courageously, take the heat and cut the budget, it’ll stop it,” says Stern. This doesn’t have be Berkley’s fate.

Allowing conservative speakers to exercise their free speech at a publicly funded institution is not only fair but it demonstrates a responsibility to the First Amendment. Society could even benefit from witnessing liberal speakers giving speeches at conservative universities.

This seems to be shaping up to be another pivotal moment in history for UC Berkeley. They could continue their violent path toward total free speech annihilation or perhaps if the student body can revive that same spirit they had during the Free Speech Movement all those years ago, they can return as the beacon of free speech in our society.