Myra Kahn Adams
|
Posted: Mar 28, 2021 12:01 AM
Share   Tweet
The opinions expressed by columnists are their own and do not necessarily represent the views of Townhall.com. 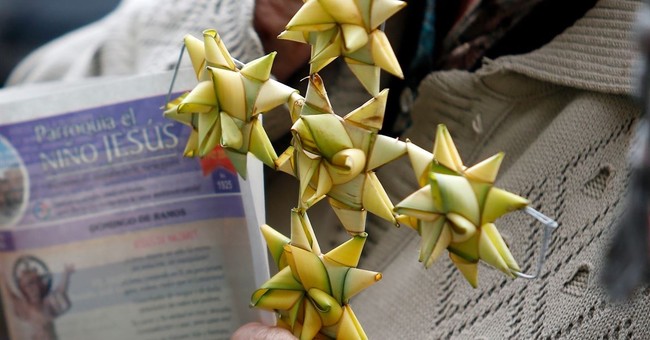 Today we will study Palm Sunday from four perspectives:

1.The reason why Jesus entered Jerusalem.

2. Fulfillment of the Old Testament prophecy.

3. The politics surrounding His visit.

4. Why were the crowds so welcoming to Jesus on Palm Sunday but turned against him five days later?

Let’s begin with the basics for “unchurched” readers because last year I wrote, “Growing up, I thought Palm Sunday was about glorifying palm trees.” (Not joking.)

But instead, Palm Sunday commemorates when Jesus entered Jerusalem to celebrate Passover, and the crowd welcomed him by waving palm fronds. Pilgrims from throughout the land are also streaming into the Holy City and buzzing about the miracles performed by Jesus. Here is how the Gospel of John describes the scene:

Now the crowd that was with him when he called Lazarus from the tomb and raised him from the dead continued to spread the word. Many people, because they had heard that he had performed this sign, went out to meet him. So the Pharisees said to one another, "See, this is getting us nowhere. Look how the whole world has gone after him!" (John 12:17-19).

Only a few weeks earlier, Jesus had resurrected Lazarus from the dead. Since we recently studied this miracle in Vol. 52, here is a pop quiz that helps explain Palm Sunday.

Q. What are the two reasons Jesus raised Lazarus from the dead?

Q. How did the chief priests (Jewish leaders) respond to Jesus resurrecting Lazarus?

A. The Gospel of John records: "So the chief priests made plans to kill Lazarus as well, for on account of him many of the Jews were going over to Jesus and believing in him" (John 12: 9-10).

The Passover pilgrims are joyful about meeting Jesus. But the Pharisees (Jewish leaders) in Jerusalem are even more angry, worried, and jealous about His growing popularity than they were after the Lazarus miracle.

All four Gospels record that Jesus triumphantly enters Jerusalem riding a donkey. Why? My NIV Study Bible notes, “An animal symbolic of humility, peace, and Davidic royalty.” Furthermore, the crowds welcoming Jesus as a “king” knew that riding a donkey symbolized his fulfillment of the Old Testament prophecy written about 518 BC:

"Rejoice greatly, Daughter Zion! Shout, Daughter Jerusalem! See, your king comes to you, righteous and victorious, lowly and riding on a donkey, on a colt, the foal of a donkey" (Zechariah 9:9).

Here is the Gospel of Matthew’s account of Jesus riding through Jerusalem:

The crowds that went ahead of him and those that followed shouted, “Hosanna to the Son of David!” “Blessed is he who comes in the name of the Lord!” “Hosanna in the highest heaven!” When Jesus entered Jerusalem, the whole city was stirred and asked, “Who is this?” The crowds answered, “This is Jesus, the prophet from Nazareth in Galilee”  (Matthew 21:9-11).

That passage provides a hint why, about five days later, a crowd in Jerusalem yelled, “Crucify him.”  While the visiting pilgrims are cheering, “Blessed is he who comes in the name of the Lord!” the Jerusalem residents ask, “Who is this?”

And now “politics” enters the story.

After Lazarus walked out from his tomb in Bethany, the Jewish leaders of Jerusalem feared Jesus would usurp their power. Fortunately for them, the Jerusalem people were unfamiliar with this itinerant prophet/preacher from Nazareth. (A lowly zip code and His followers were undistinguished.) As the week progressed, the leaders were able to denigrate him as a “blasphemer” – certainly NOT the Messiah – and conspired to rid themselves of Him with assistance from their rank and file.

But that happened five days later. We need to go back and finish my favorite part of Palm Sunday when Jesus flings a one-line zinger. With the Pharisees furious about the palm-waving parade, the following exchange appears in the Gospel of Luke:

Why did Jesus come to Jerusalem for the Passover knowing that the Jewish rulers wanted to kill him? He came to die as the new “sacrificial lamb” from the first Passover in Exodus. And, just as the blood of the slaughtered Passover lamb was used to free God’s Jewish people from the bondage of slavery in Egypt – Jesus used his body and blood as the sacrifice to free His Jewish people from the bondage of sin to give them (now us) eternal life. Always remember: For the wages of sin is death, but the gift of God is eternal life in Christ Jesus our Lord (Romans 6:23).

As a Jew who believes that Jesus is the Messiah, I asked two distinguished fellow Messianic Jews to help celebrate Palm Sunday and mark the start of Holy Week with an inspiring quote. First, Townhall readers know Dr. Michael Brown and his newest book, “Resurrection.” He wrote:

“Crowds can be fickle, shouting “Crown Him!” one day and “Crucify Him!” the next. And that’s the difference between crowds and disciples. Crowds look for the excitement of the moment, for the instantaneous high, for something that will make them feel bigger and better. Disciples recognize what really matters, pledging their lives to follow their Master no matter the cost or consequence. Jesus died for everyone, including the crowds, but He poured His life into His disciples.”

Next is Rabbi Aaron Allsbrook from Ohev Yisrael Messianic Congregation in Springfield, Virginia, who calls Jesus by his Hebrew name, “Yeshua”:

“In a span of five days, the crowds of Jerusalem went from a joyous welcoming of Yeshua to a horrific calling for His murder. How?  Wicked leaders. In Matthew 21, after signs and wonders and even children calling Yeshua the Davidic Messiah, the priestly leaders become indignant (see v.14-16). It seems those in power didn’t like their power being threatened. They became so enraged that they set themselves to convince the crowds to call for Yeshua’s death sentence (see Matthew 27:20). Unfortunately, the crowds listened. We must stand up for Yeshua and the truth no matter what or against whom.”