Mona Charen
|
Posted: Feb 15, 2018 4:00 PM
Share   Tweet
The opinions expressed by columnists are their own and do not necessarily represent the views of Townhall.com. 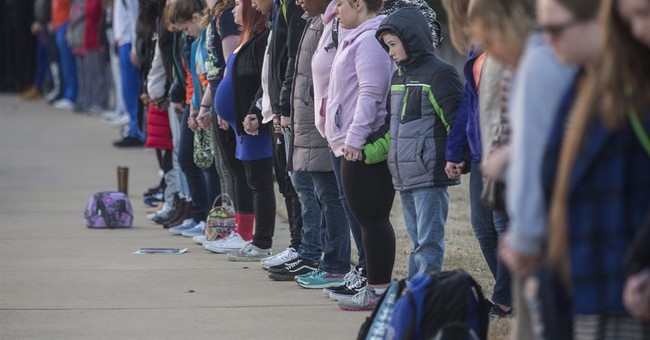 First, the scale of the problem. While overall gun deaths have been declining in recent years, mass shootings have been increasing. According to the Harvard Injury Control Research Center, the number of days separating mass shootings declined from an average of 200 between 1983 and 2011 to 64 between 2011 and 2014. The five deadliest mass shootings in U.S. history have occurred in the past 11 years. These shocking attacks have become so common that their locations and dates blur -- Sutherland Springs, Blacksburg, Sandy Hook, Las Vegas, Orlando, Binghamton, Aurora, Dallas, Washington Navy Yard. The randomness of these massacres, and their quotidian locations -- schools, movie theaters, concerts -- amplify the horror.

Every possible cause is considered to explain the epidemic of cinematic violence: the overabundance of guns, violent video games and films, family decline, the waning influence of churches, inadequate mental health policies. Perhaps all of these contribute, and all require long-term social reforms.

But then there is this insight: Mass killings, like viruses, seem to be contagious. It isn't news that behaviors are catching. Sociologists have long known that suicide, for example, prompts imitators, especially among the young. Researchers at Arizona State University have studied mass murders (particularly school shootings) and found that each new episode does inspire copycats.

We also know that some of the mass shooters have expressed fascination with their predecessors. The Oregon shooter, for example, had written of another: "A man who was known by no one, is now known by everyone. ... Seems the more people you kill, the more you're in the limelight."

The second Fort Hood shooter, weirdly enough, seemed to decry the attention paid to killers. He posted on Facebook: "These bastards have perfected their way of attacking by studying previous massacres to gain publicity and their minute of fame as a villain." He then went on to commit a mass shooting himself. An Everett, Washington, man was arrested on Wednesday after his grandparents reported to police that he was "learning from past shooters."

The sick desire for fame -- even when purchased through atrocity -- seems to be at work in many of these cases. Would denying them the attention they seek diminish the attraction?

The proposal is straightforward. It's outlined at www.nonotoriety.com. News organizations and law enforcement officers should voluntarily limit the use of the names of mass killers. It's not possible in the internet era to keep the names secret, but news organizations can dramatically reduce the attention a killer receives. There is no need, for example, for cable news to feature images of the accused, nor to repeat his name dozens of times within 24 hours. Newspapers should not publish the manifestos of diseased minds. Investigators can comb through his social media rants, but the media should shun them. TV channels may get ratings by repeating the grievances of killers, but they are also providing a platform that other borderline personalities may find irresistible.

We expect our presidents to serve as national grief counselors in these moments. But it's just possible that this attention is also putting too much power into the hands of mass killers. While a presidential visit may comfort the grieving, is it worth it if it also gratifies the murderer's rage for attention -- and spurs some future attention-seeking monster?

Some homicidal types are motivated by political objectives. Of the 69 mass shootings since Columbine High School, four were committed by Islamic extremists, and others (the Sikh temple, Charleston) by racists. But the overwhelming majority were the work of men whose motivations probably include a lust for fame.

Perhaps this is wrong. Perhaps denying mass killers the attention they seek won't have any effect on this epidemic of violence. But what would be lost by trying?

Share this on Facebook
Tweet
Comey Backtracks on FISA Warrant Against Carter Page
Katie Pavlich
'Will You Shut Up, Man:' Thoughts on the First Debate
Guy Benson