Does Obama Care About People? 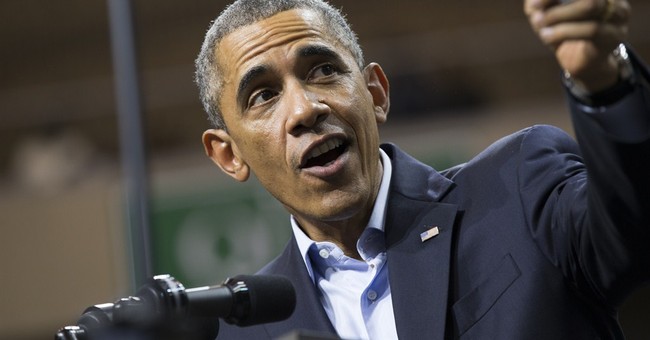 Trending
Can you walk out on the messiah?

Appearing at a campaign rally for gubernatorial candidate Anthony Brown in Maryland on Sunday, President Obama sought to capture the magic that had electrified audiences in 2008 and, to some considerable degree, even in 2012. Obama isn't doing much stumping this year. He limits his campaigning mostly to fundraisers. This is the year, after all, when Democratic candidates are announcing how important it is in our system of government to have honest disagreements with the president. They're hastening to say that they would be tougher than he is on ISIS. They are declaring that a travel ban from West Africa is only common sense. It's the year when some have discovered a sacred Constitutional right to keep silent about whom they voted for in 2008 and 2012.

Maryland is an exception. It's about as safe a Democratic state as you can find, and the president was welcomed. The audience at the rally was largely African-American. And yet, according to Reuters, "a steady stream of people walked out of the auditorium while he spoke ... and a heckler interrupted his remarks."

Could it be that even loyal Democrats -- even those who want to see Obama in the flesh -- feel that they've heard it all before? Their actions send a clear signal: We think you're a historical figure worth laying eyes on, but your words no longer interest us.

In 2012, reluctant to encourage a referendum on the first four years of his leadership, Obama successfully turned attention away from his record and toward Mitt Romney and the Republicans. The race became (with the unwitting cooperation of several cloddish Republican candidates) not about the economy or jobs or debt or America's global retreat, but about saving American women from medieval inquisitors and shielding Hispanics from mass deportation.

Democratic candidates in 2014 are, if anything, even more eager to turn attention away from the president's performance in the past two years. The economy has not improved. Obamacare's debut was a debacle. Foreign policy is a shambles, government agencies from the IRS to the Secret Service are loose cannons, and Ebola threatens.

Democrats are attempting to reprise some of the themes that worked in 2012, notably the "War on Women." But not even that fright mask seems to be working anymore. Sen. Mark Udall's campaign in Colorado was wall-to-wall gynecology -- to the point where he was ridiculed as "Mark Uterus." The Denver Post was so disgusted that it endorsed his opponent, Rep. Cory Gardner. Like other "war on women" attacks, Udall's accusations were false. He asserted that Gardner had run an "eight-year crusade to outlaw birth control." Gardner swatted the lie away with ads touting his support for selling contraceptive pills over the counter (a technique originated by Bobby Jindal).

Democrats are struggling not just because the economy is stagnant and the world is in chaos. They are paying the price for something else. Obama has squandered the greatest asset he had: the perception among Americans that he cared about their problems.

Obama telegraphs indifference to Americans' well-being. When the Benghazi compound was overrun and our ambassador killed, he first dissembled (blaming a video) and then thundered about retribution and justice, but what happened? With the exception of one arrest, Benghazi has been dumped. No one has paid a price for that attack on the U.S.

The president permitted the ISIS menace to metastasize and dismissed the terrorist army as "jayvee," even as his national security advisers were testifying before Congress that the group was a profound worry. When stories surfaced later that the president attended only 40 percent of his intelligence briefings in person, it fed the impression that Obama doesn't take the time to evaluate threats to the country. He now blames the intelligence community, but a man who goes golfing after an American is beheaded is signaling a certain coldness.

The response to Ebola underlines all of these tendencies in thick black ink. His instinct has been to tamp down fears rather than address threats with alacrity. He is willing to send U.S. troops to Africa to fight Ebola but not to Iraq to fight ISIS. The administration's resistance to a travel ban makes no sense if the top priority is the safety of Americans.

In 2012, most people still believed that Obama cared. How many do today?