The Spreading Stain of Obama's Incompetence 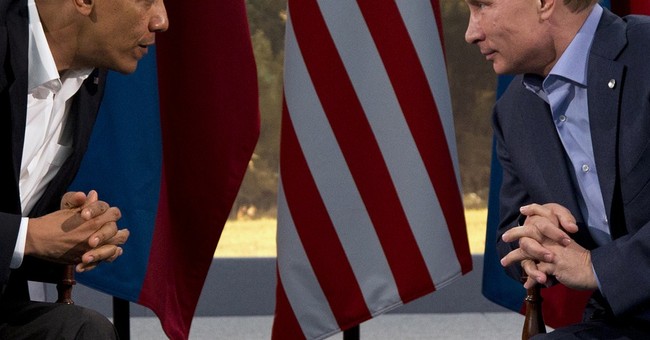 An estimated 93,000 people have died in Syria's metastasizing civil war. Hundreds of thousands of that conflict's refugees strain resources and stability in neighboring countries. Iran continues its steady march toward nuclear weapons development. North Korea menaces its neighbors and episodically threatens to launch nuclear missiles at Los Angeles. Turkey, long lauded by Obama as a model for the region, is violently cracking down on peaceful demonstrators. Slow growth and high unemployment hobble the world's most advanced economies as growing bureaucracy and crippling debt take their toll. Islamist movements are making gains in Mali, Indonesia, Pakistan and Iraq after gaining power in Egypt and Tunisia. The Taliban is boldly flying the flag of the "Islamic Emirates of Afghanistan" (the name of the country when they controlled it before 9/11) from their new offices in Doha. China is aggressively expanding its navy, engaging in barely concealed cyber espionage on American businesses and government and manufacturing territorial disputes with neighbors in the South China Sea. Russia is sliding steeply into tyranny, and Islamic terrorists have recently scored two victories -- one on the streets of Boston and one in London.

Yet the president of the United States thinks the issue that urgently requires his attention is reducing the nuclear arsenals of Russia and America. Speaking in Germany to a crowd of 4,500 invited guests -- a small fraction of the 200,000 who gathered to adore him in 2008 -- the president reprised his stale "citizens of the world" platitude. He also returned to a theme he favored as a senator and presidential candidate: "We may no longer live in fear of global annihilation, but so long as nuclear weapons exist, we are not truly safe." Accordingly, the President will seek "negotiated cuts" with Russia to reduce our nuclear arsenal by one-third from levels agreed to in 2010.

The president talks of moving beyond "Cold War postures," but by focusing on nuclear arsenals, he seems to be the one in a time warp. Is he longing to revisit or even rewrite the history of the Cold War? Does he wish he could have been in Reagan's place at Reykjavik? Obama would doubtless have cheerfully agreed to abandon the Strategic Defense Initiative, as Reagan declined to do. And what then? Would the world have been safer? What about the little detail that we won the Cold War? Perhaps he'd like to rewrite that, as well?

Obama invokes the goal of "ridding the world of nuclear weapons." Sorry, but this is sophomoric. You might as well favor outlawing fire. He does, alas, have the power to weaken our nuclear deterrent. That's what we get for reelecting him despite overhearing the whisper to Dmitri Medvedev that he would have "more flexibility" after the election. But the idea of setting a good example for the other nuclear powers is sheer childishness. Will Pakistan, India or, God help us, North Korea, be moved by our example? Were they in 2010, the last time Obama reduced our arsenal? This kind of thinking is unworthy of the leader of a great nation and frankly, a little frightening.

It's also worrying that Obama has proved such a terrible judge of character. Bad enough that he alienated Netanyahu and embraced Erdogan. He continues to portray the thuggish Vladimir Putin as a worthy partner.

In the space of the last year, Putin has signaled that he may withdraw Russia from the post-Cold War treaty governing conventional forces in Europe and from the 1987 IMF treaty. He has threatened that if the U.S. gives even 10 missile interceptors to our ally Poland, Russia will have to "get new targets in Europe."

For the first time since the Cold War, Russia has resumed heavy bomber sorties.

Since achieving power, the former KGB colonel has poisoned British citizen Alexander Litvinenko, who died in London, and Ukrainian leader Victor Yushchenko, who was maimed but survived. At least 14 journalists who challenged Putin have been assassinated. One in suburban Maryland was shot in the groin. Business leaders have been exiled and jailed. Ukraine, Estonia and Georgia have been bullied. Press freedoms have been radically curtailed. Russia has agreed to build two new nuclear reactors in Iran.

Putin has shown contempt for the naive Obama. Last month, Putin kept Secretary of State John Kerry waiting for three hours when Kerry visited to ask his cooperation on Syria. After the meeting, Russia announced that it was sending Assad the S-300 air defense missile system.

World leadership is not for beginners. It requires something beyond tabloid celebrity and dorm room musings.