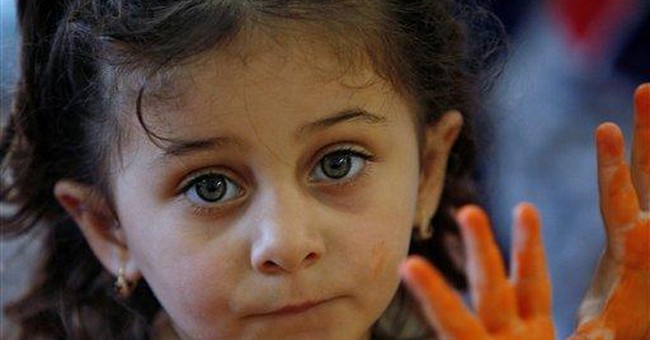 My friend E.J. Dionne Jr., a liberal columnist for the Washington Post, is a fine man with, I feel safe in asserting, a warm heart. But he betrays in a recent column a persistent failing of the left -- imperviousness to evidence.

"Begin with the outrageous $1.1 billion, 15 percent cut from Head Start, a program that offers preschool education to roughly 965,000 poor children. According to the Center for Law and Public Policy, this would knock 218,000 kids out of Head Start and force 16,000 classrooms to close. That is an excellent way to lose the future, as Obama ought to be saying. What could be a better use of public money than helping our poorest children early in life so they might achieve more in school, and later?"

Like most liberals, Dionne is enchanted with the idea of Head Start -- the romance of a government program that would provide care, nutrition, education, and skills to impoverished preschoolers in order to erase, to the degree possible, the handicaps poverty imposes. That was the idea in 1965, when Head Start was founded. Lyndon Johnson declared, upon signing the enabling bill that "Today, we reach out to five and half million children held behind their more fortunate schoolmates by the dragging anchor of poverty." Head Start, he promised, would be their "passport" out.

It would have been worth the $166 billion taxpayers have spent on the program since 1965 if a significant portion of Head Start alumni did improve their educational outcomes and escape poverty. But that did not happen.

As any number of studies have demonstrated over the years, the effects of Head Start are modest to nugatory. Stephan and Abigail Thernstrom chronicled the failure in "No Excuses." One study found that Head Start students were slightly more likely to be immunized than others -- a good thing of course, but a) not primarily what the program was sold as, and b) achievable far more cheaply through other programs like Medicaid. A 1969 study found that any gains participants displayed faded away in the early grades. By third grade, Head Start graduates were indistinguishable from their non-participating classmates. Rather than scrap the program, President Nixon (a sheep in wolf's clothing where domestic policy was concerned) concluded that, "Head Start ... must begin earlier in life, and last longer, to achieve lasting benefits."

Later surveys showed similarly dismal results. By 1987, even the program's founder, Yale psychologist Edward F. Zigler, declined to claim educational benefits for the program. But as the Thernstroms concluded, "Everyone could agree that poverty was hard on blameless children, so any federal effort purporting to help them was difficult to attack without seeming mean-spirited."

A just-released study by the Department of Health and Human Services delivers incredibly harsh news about Head Start. A large, nationwide survey of 4,600 preschoolers who were randomly assigned to either the Head Start (experimental group) or no program (control group) were studied on 114 different measures ranging from academic skills to social-emotional development, to health status. The study found no statistically relevant effects from the Head Start program by the end of first grade.

If a study falls in the forest and the major news organizations fail to report it, does it make a sound? Hardly a whimper. A few conservative websites like Heritage, CATO, and the Independent Women's Forum noted the results, but elsewhere, all was silence.

Or, not silence actually, complete denial. President Obama had boosted funding for Head Start from $6.8 billion in 2008 to $9.2 billion in 2009. Secretary of Health and Human Services Kathleen Sebelius and Education Secretary Arne Duncan support even greater "investments" in the failed program in the future. Study? What study?

According to Douglas Besharov of the University of Maryland, it costs $22,600 annually to keep a child in a year-round Head Start program. Typical preschools run about $9,500. But the price simply doesn't matter. The lack of results doesn't matter. The only thing that seems to matter is that liberals are able to preen about their compassion -- oh, yes, and condemn anyone not impervious to evidence as heartless.