To Democrats, It's Monopoly Money 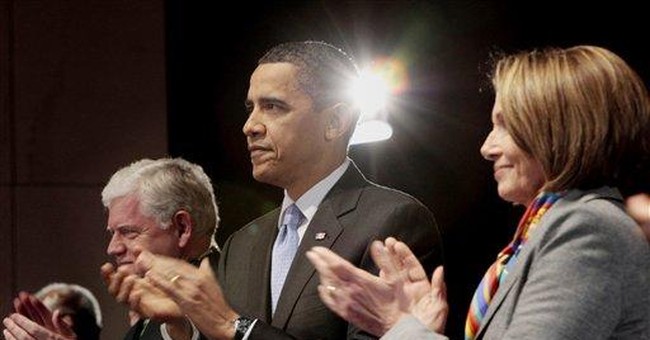 It is America's misfortune that at a moment in history that required sober, grown-up stewardship and a realistic appraisal of our fiscal trajectory, we elected (by large margins) the party of supplicants and whiners. How appropriate that one of the selling points of Obamacare was the guarantee that children up to the age of 26 can remain on their parents' insurance plans -- because the Democrats' whole program is about extending adolescence.

Like teenagers, the Democrats are weak on long-term consequences, saving for the future, and planning for (entirely foreseeable) contingencies. They excel at demanding their allowance, but not so much at earning it. They are the "me" party. Health care, pronounced Nancy Pelosi, is a "right" to be financed by others, not a privilege.

A serious party would grapple with our mounting unfunded obligations. Each year the trustees of the Medicare and Social Security programs issue a report analyzing the costs of those programs. Last year's report put the total unfunded liability of the two programs at $107 trillion in 2009 dollars. The two programs now consume about 14 percent of tax receipts. By 2030, even without the new Obamacare entitlement, they will chew up half of all federal outlays. By 2060, they would swallow 75 percent. They are, to use the favorite Washington expression, "unsustainable."

Particularly at a time when the battered economy is taking its first tentative steps toward recovery, a responsible government would seek to reduce debt, ease the burdens on businesses, and refrain from introducing more instability and unpredictable new burdens on taxpayers.

Instead, the Democrats have charged ahead with their social/democratic vision of a Europeanized America. The past several months have removed all doubt that the Democrats are willing to risk national bankruptcy in pursuit of their great white whale -- nationalized health care. They may yet compound the error by adding cap and trade to the ledger.

Consider the brief nod to fiscal responsibility they offered in February. Excoriating "a decade of profligacy," President Obama signed "Paygo" -- a measure to require that new spending be balanced by cuts or tax increases so as not to increase the deficit. "It's easy to get up in front of the cameras and rant against exploding deficits," declared the president. "What's hard is actually getting deficits under control. But that's what we must do."

Or not. Paygo exempted some 50 federal programs, including (you guessed it) Social Security, the Medicare "doc fix," and anything the leadership chose to label "emergency" spending. When the Democrats appropriated $10 billion for extension of unemployment insurance and COBRA insurance plans without any offsetting cuts in other areas or tax increases, Sen. Jim Bunning protested and became a pinata for his trouble. Bunning unmasked the truth: To the Democrats, it's all Monopoly money. That's why they can rack up deficits in the trillions without batting an eye.

And they have the gall to claim that passing this 2,700-page monstrosity proves that "they can govern."

This is a clarifying moment. By driving their agenda so relentlessly and to such extremes, the Democrats have redrawn the political map. No longer will it easily be said that there is no relevant distinction between the parties. No longer will conservatives easily disdain the Republican Party. Yes, under President Bush, the U.S. accumulated $3.3 trillion in deficits. But based purely on his policies in his first year, Obama is projected to run deficits of $7.6 trillion over eight years -- and that may be a low-ball estimate. Republicans now have a clear message to convey to voters: We will undo the damage. It seems likely now that all of the energy represented by the Tea Party movement will flow into Republican, not third-party channels.

The Republicans acquitted themselves well throughout this long struggle. Articulate, well-prepared members like Rep. Paul Ryan, Sen. Tom Coburn, Rep. Mike Pence, Sen. Lamar Alexander, Sen. John Kyl, and others made the case for sensible, market-oriented reform of the health care system and against the reckless, corrupt, heavy-handed, bankrupting, choice-limiting scheme of the majority party.

When President Obama tilted his chin toward the sky at his inauguration and declared that "change is coming to America," this is what he had in mind -- an irreversible turn toward a European welfare state and away from the free-market model. The turn has begun. The voters will decide whether it is irreversible.