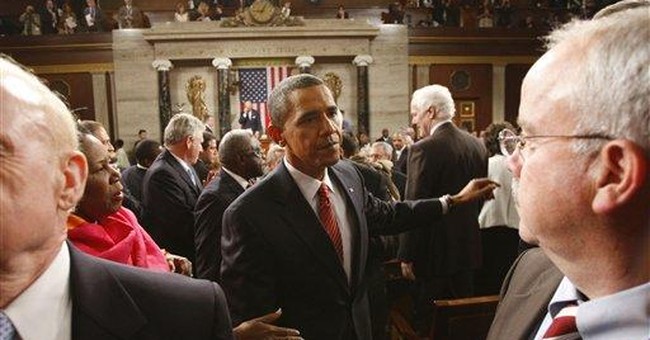 Let's stipulate that it was wrong of Rep. Joe Wilson, R-S.C., to shout "You lie" during President Obama's health care speech. It was a violation of courtesy and etiquette. Wilson apologized -- which is more than the Democrats who booed President Bush's State of the Union address in 2005 ever did.

But I confess that watching at home, similar expostulations were heard. Some seemed to have burst, irrepressible, from my own lips.

There was, for starters, this misleading assertion: " ... If you are among the hundreds of millions of Americans who already have health insurance through your job, or Medicare, or Medicaid, or the VA, nothing in this plan will require you or your employer to change the coverage or the doctor you have." Ah, shades of Clintonesque lawyerly evasion. No, it won't "require" you to change, but if the tax treatment changes (and Obama proposes, among other things, to tax high-end plans) and the public option is available, employers may choose to change their offerings and employees will then no longer get to keep their current insurance.

The president then adverted to "more than 30 million American citizens who cannot get coverage." As the Washington Examiner's Byron York notes, the 30 million figure represents a climb down from the president's oft-repeated claim (most recently in August) that there are "47 million uninsured in this country." (The president's track record on numbers is not inspiring. Remember his claim -- since debunked -- that medical expenses caused a bankruptcy every 30 seconds? Even ABC News called it "unsupportable.")

Perhaps by downgrading to 30 million, President Obama is attempting to exclude an estimated 9.3 million illegal aliens. But look closely at the rest of the uninsured. According to Census and HHS data, 10 million have incomes more than 300 percent of the poverty line, meaning they could afford coverage but for some reason choose to forego it. And speaking of foregoing, 5 million are single childless adults between the ages of 18 and 34. An estimated 6.4 million are "Medicaid undercount," meaning they receive Medicaid or SCHIP but tell census takers otherwise. Another 4.3 million are eligible for Medicaid or other government health programs but have failed to enroll. That leaves just 10.6 million U.S. citizens below 300 percent of poverty, not eligible for an existing government program, and not between 18 and 34.

So the president's claim that 30 million Americans "cannot get coverage" is, not to say more, inaccurate. So, too, was his statement, uncivil accusation really, that opponents of health care reform have "lied" about his plan providing coverage for illegals. The supposed bar on illegals receiving health coverage only applies to a section of the bill. And Democrats rejected a Republican proposal that would have required verification of eligibility. Ditto for the claim that the Obama plan would not cover abortion expenses. It would not explicitly do so. But money is fungible and it would be impossible to prevent public funds from subsidizing abortions. Again, Republican amendments to prevent taxpayer money from paying for abortions failed. That's revealing.

And then there was this: "Reducing the waste and inefficiency in Medicare and Medicaid will pay for most of this plan." I didn't think until now that President Obama had much of a sense of humor. Perhaps I was wrong. He also claimed that his plan will 1) extend coverage to all; 2) force insurance companies to cover "at no extra charge" routine checkups and screening tests like mammograms and colonoscopies; 3) place limits on how much people can be charged for out-of-pocket expenses; 4) forbid yearly or lifetime caps on coverage -- and spend less than we are currently spending! He's not a president; he's a wizard.

But no, the funniest part of the speech was Obama's supposed overture to Republicans on malpractice reform. He is directing the secretary of HHS, he grandly offered, to pursue local "demonstration projects" in tort reform. But states like Texas have already proved the effectiveness of, for example, caps on pain and suffering damages. In any case the idea that some piddly demonstration project that would take several years to complete should be offered as a sop to Republicans while Democrats go about the business of revamping the entire health delivery system today is pretty much of a joke.

The rationale for the speech -- that lies, distortions, and misunderstandings account for public opposition to a health care overhaul -- was misconceived. This administration -- anodyne phrases about bipartisanship notwithstanding -- does not see beyond its narrow ideological keyhole. That weakness may prove crippling.