What Obama Could Say to Get Our Respect 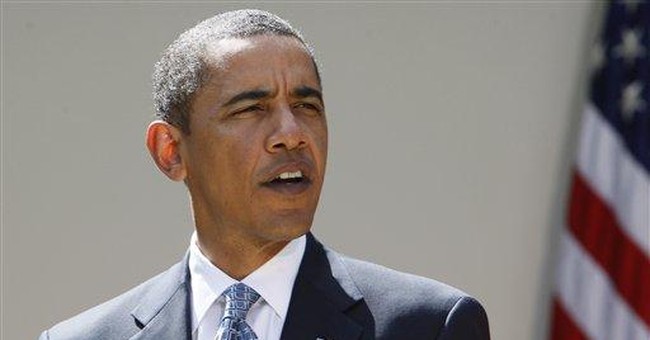 Trending
As Democratic congressmen limp back to D.C. after bruising town hall meetings, and polls show Obama and the Democrats in Congress sinking fast in public opinion polls, the political team in the West Wing has surveyed the landscape and decided that what we need is another big Obama speech. "Under Fire" headlined The Politico, "Obama Shifts Strategy." Shifts? Obama has held four full-dress, primetime news conferences, granted God knows how many interviews, and delivered dozens and dozens of speeches on health care. A cartoonist featured an exasperated voter looking at the president on TV and asking, "Is he on again?"

Still, another speech could be helpful -- if President Obama says something different.

Speaking to the American Medical Association back in June, the president said, "My view is that health care reform should be guided by a simple principle: fix what's broken and build on what works." But always absent from his list of things that are broken is the litigation free-for-all of medical malpractice. Howard Dean was frank about why the Democrats have left malpractice reform out of their plans. "The reason tort reform is not in the bill is because the people who wrote it did not want to take on the trial lawyers ..." The trial lawyers, Dean neglected to add, are the single largest contributors to Democratic office holders.

But if the president is sincere that bringing health care spending down is one of his chief motivations in reforming health care ("the cost of our health care is a threat to our economy ... it is unsustainable for the United States of America"), he cannot ignore the costs of medical malpractice and the defensive medicine it spawns. When he speaks to the Congress next week, the president could rock the political world if he acknowledged certain facts.

The medical malpractice system is screwy. Though its advocates argue that lawsuits provide necessary accountability for medical errors and negligence, there is very little connection between incompetence or fault and the likelihood of being sued. According to the National Center for Policy Analysis, fewer than 2 percent of those negligently injured by doctors or hospitals ever sue or receive compensation (and when they do, they get just 46 cents of every dollar in recovery, the rest going to lawyers and court costs). Yet an estimated one in two physicians will be sued sometime during his or her career. The high cost of malpractice insurance has driven some doctors out of fields like neurosurgery, obstetrics, and emergency medicine, creating critical shortages in some areas.

Meanwhile, fear of litigation continues to fuel medical inflation. According to an anonymous survey of 900 doctors in Massachusetts, between 18 and 28 percent of tests, procedures, and referrals, along with an estimated 13 percent of hospital admissions, were ordered to avoid possible liability. The costs are passed on to patients. According to NCPA, the total cost of the medical tort system is estimated between $129 billion and $207 billion annually -- or as much as $2,000 per year for every household in America.

If doctors don't get sued for negligently harming patients, why do they get sued? According to Malcolm Gladwell's book "Blink," the answer comes down to bedside manner. A number of studies have shown that patients do not sue doctors who treat them with respect (however terrible the outcomes may be).

Researchers examined two groups of surgeons -- one that had never been sued and one that had been sued at least once. Those who had never been sued spent an average of three more minutes per visit with their patients. They were better listeners and tended to laugh and joke more. There was no difference between the two groups in the amount or quality of medical information imparted. In fact, Gladwell argues, you can take it one step further. Researchers who watched tapes of doctor/patient interactions could correctly predict which doctors would be sued based entirely on the doctor's tone of voice in the consultation. "If the surgeon's voice was judged to sound dominant, the surgeon tended to be in the sued group. If the voice sounded less dominant and more concerned, the surgeon tended to be in the non-sued group."

The current medical liability lottery is a boon only to trial lawyers. Ninety-eight percent of those harmed by negligence or incompetence never see a recovery. Yet 100 percent of doctors order unnecessary tests and procedures with one eye on the trial bar. Most Democrats have jealously protected their trial lawyer donors. President Obama could certainly burnish his bona fides by defying them.