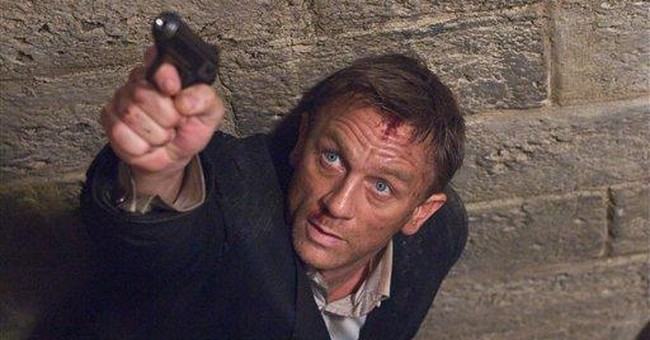 Absurdity, cartoonish violence, sexism, campiness -- these are no bars to enjoying a matinee with my teenaged boys. So off we went to see Daniel Craig as James Bond do his suave star turn in Quantum of Solace over the weekend.

We ought to have known, from the impenetrable title, that this was not going to be satisfying entertainment. "Quantum" means -- roughly -- amount, and "solace" of course means comfort. Since this is a story about revenge, we are asked to believe that Bond achieves a measure of comfort from dispatching any number of bad guys unfortunate enough to cross his path. The Bond girl, too, is acting out her own revenge fantasy. Unfortunately, there was hardly a quantum of coherence to the story.

Bond is seeking revenge for the murder of his love Vesper (introduced in Casino Royale). Except that Vesper betrayed him. Or has he forgiven her? We aren't sure how he feels because the dialogue is extremely sketchy. Craig's Bond is not the winking, debonair skirt chaser of earlier iterations. He is all taut energy and grim determination. That's fine. The nudge-nudge naughtiness of the earlier Bonds was cloying. But Quantum's plot line is so neglected (nearly all of the focus is on chase scenes and hand-to-hand fighting) that we don't get any clear idea of why this particularly menacing Bond is killing people without so much as a backward glance.

The vast conspiracy in this film concerns a fiend who uses an environmental firm as a cover to corner the market on the world's most precious resource -- water. A little harder to swallow than Goldfinger's plan to corner the market on gold perhaps. OK, whatever. But the film's writers and producers could not resist making the CIA a heavy. The CIA, we are told, has no objections to propping up corrupt and murderous thugs in Latin America so long as a few individuals get a cut of the action. Explaining his plan to his CIA contact, (I quote from memory) the villain notes that the U.S. surely does not want another Marxist "giving away wealth" to the people of Latin America. (The British are portrayed as having rogue elements, a high-ranking minister and a few secret agents on the take, but not the entire security service.)

Here we go again. As it happens, I hold no brief for the CIA. As far as I'm concerned, it's a dysfunctional agency that has been wrong about most of the important threats of our lifetimes. In 1981, noting the careerism, caution, and lack of elan he saw, Robert Gates said the CIA had "a case of advanced bureaucratic arteriosclerosis CIA is slowly turning into the Department of Agriculture." But the idea -- and it is a hoary one -- that the CIA is in the business of creating evil, right-wing dictatorships in Latin America is just laughable. Besides, the CIA in the film is clearly meant to stand for the U.S.

Yes, the U.S. had a role in propping up dictators in the 1950s and 60s. And yes, it would have been ideal if those countries had moderate democrats we could support. But they usually didn't. It was often a choice between a Soviet-backed thug like Fidel Castro or a right-wing regime.

But in the 1980s and since, the United States did everything possible to find the moderate forces in places like El Salvador and Nicaragua. We enjoyed great success in spreading democracy and free markets in Latin America. Don't look to Hollywood for instruction, but today that progress is profoundly threatened -- not by right-wing nut jobs as the movies would have it -- but by genuine left-wing dictators and would-be dictators. Do the names Hugo Chavez, Evo Morales, and Daniel Ortega not ring a bell? Last week, Castro acolyte Chavez threatened to send tanks into states that refused to vote for his slate of candidates in local elections. Morales, the left-wing leader of Bolivia, had stopped cooperating with U.S. anti-drug efforts in his country and has arrested domestic opponents. Ortega, returned to power in Nicaragua by a 38 percent plurality vote, is repeating the tactics that made him so unpopular in the 1980s -- stifling dissent, fixing elections, and employing street thugs to intimidate the opposition.

Hollywood types were delighted with the election of Barack Obama, some hoping that the choice would improve America's image abroad. It's a little ironic, because Hollywood's portrayal of the U.S., in a thousand films like this one, goes a long way toward creating that anti-American sentiment in the first place.