How Does Obama Feel About America? 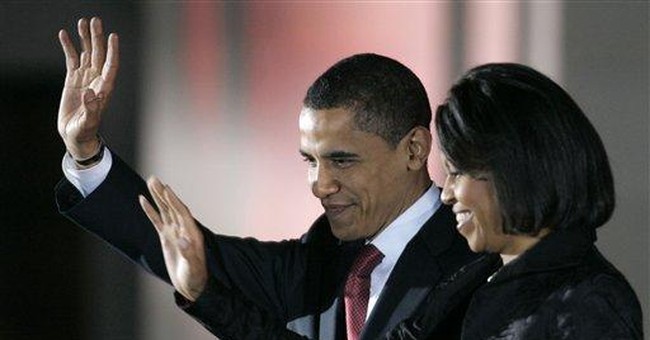 Barack Obama's words are often attractive but oddly concealing. His speeches are all balm and mood. It's all very well to seek, as Obama claims, to transcend old categories, to reject the "old politics." But then what? This graceful rhetorician leaves you wondering: Who is he really? What does he want for himself and for his country?

In search of answers that go deeper than the Congressional Record, I read his first book, "Dreams from My Father: A Story of Race and Inheritance." Once you get past the happy surprise of finding a politician who can actually write, the book contains some disquieting elements.

Obama is the product of a union between a white Kansan and a black Kenyan who met in Hawaii. I had assumed, before reading his memoir, that Obama viewed himself as a natural bridge between the races and that his message of unity sprang in part from his biology. That was wrong. From his earliest years, Obama engaged in a preoccupying internal struggle to make himself a fully authentic black man.

Young Barack hardly knew his father because the elder Obama left when he was 2. One meeting when Barack was 10 and a few letters were all he had. Only much later would Obama discover that his father had many wives and many children -- all of whom wound up disappointed in him. Barack's mother, Ann, went on to marry another non-American, an Indonesian named Lolo, and took the young Barack to live in Jakarta. Perhaps she was hoping to live some sort of Third World idyll. Obama never reveals her political views nor her feelings about America. But we get one glimpse in this passage:

"Looking back, I'm not sure Lolo ever fully understood what my mother was going through ... why the things he was working so hard to provide for her seemed only to increase the distance between them ... He landed a job in the government relations department of an American oil company. ... Sometimes I would overhear him and my mother arguing in their bedroom, usually about her refusal to attend his company dinner parties, where American businessmen from Texas and Louisiana would slap Lolo's back and boast about the palms they had greased to obtain the new offshore drilling rights, while their wives complained to my mother about the quality of Indonesian help. He would ask her how it would look for him to go alone, and remind her that these were her own people, and my mother's voice would rise to almost a shout.

Grasping, insensitive Americans? Businesspeople? Or just Americans? Whom did she reject?

Whom does he reject -- or what? Left-wing ideas are not so much articulated in this memoir as presumed. Obama has claimed that his experience living abroad gives him a valuable perspective for a chief executive. Yet his reflections on the effect Western capitalism has had on Jakarta and Chicago's south side sound like warmed over Herbert Marcuse. "How could we go about stitching a culture back together after it was torn? How long might it take in this land of dollars? The very existence of the factories, the timber interests, the plastics manufacturer, will have rendered their [Indonesian] culture obsolete; the values of hard work and individual initiative turn out to have depended on a system of belief that's been scrambled by migration and urbanization and imported TV reruns."

Obama's self-portrait in this book is that of a searching, nonjudgmental young man attempting to find his rightful place after a confusing start in life. But he is attracted by the harshly ideological Rev. Jeremiah Wright, whose church he joins. Wright peddles racial grievance religion. Following 9/11, he said, "[W]hite America got a wake-up call ... White America and the Western world came to realize that people of color had not gone away, faded into the woodwork or just 'disappeared' as the Great White West kept on its merry way of ignoring black concerns."

Obama says he doesn't agree with Wright about everything. Fine. And maybe he doesn't agree with his wife when she (twice) said that she'd never been proud of her country until its people began to support her husband. But then, what did he mean when he said on March 4 that making a little girl proud to say she is an American is the "change we are calling for"?

One suspects that beneath the soothing talk, there is bitterness in the man that we'd best learn more about before voting.