Hamas, Israel and the American Media 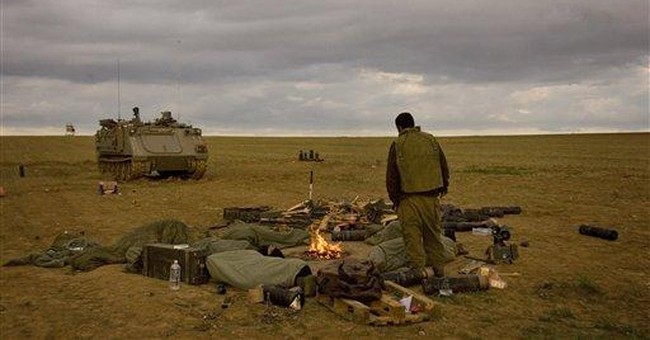 I'll never forget the time my wife came screaming into our bedroom late at night. I was sound asleep; she usually stayed up later than me watching TV.

“Wake up! Wake up! You made the Daily Show!!” she shouted.

Convinced that the house was either on fire or an army of terrorists was storming our residence, I practically fell out of the bed, wild-eyed.

Thankfully, the huns weren't storming the place. It was, indeed, just a brief video clip of me saying something on Fox News that Jon Stewart, the host of Comedy Central's popular fake news show, used for a punchline.

My Denise was very excited.

The Daily Show is a cultural phenomenon. Fast-paced, hip, and smart, Jon Stewart hosts a nightly parody of the news, covering current events with his tongue-in-cheek, bemused style that usually skewers conservatives, although he takes a fair amount of shots at libs, too.

While undoubtedly not sharing many of Stewart's political views, I've always appreciated the way he treats conservative guests who appear on the show to hawk a book. He clearly has a liberal bent, but usually treats his guests with respect and courtesy.

This week, the new host of NBC's 'Meet the Press', David Gregory, was a guest. During a conversation about the current conflict in the Middle East between Israel and the terror group Hamas, Stewart said the following:

“Why can't any American politician criticize Israel in any way for their behavior? I'm watching these shows and there's not one person going, Gee, it's kind of complex. Yeah, Hamas is a bad actor and they shouldn't be throwing missiles, but, gosh, the treatment of the Palestinian people for the past 50 years, not so nice, either.”

The audience roared with approval. There's nothing quite like a prominent member of the American media bashing Israel that makes a bunch of liberals any happier.

Welcome to the USA.

One day before I die, I will finally understand why liberals, especially Jewish liberals, fail to fully support Israel in its right to survive terror attacks.

For months, Hamas has lobbed rockets into Southern Israel. Thousands of them, in fact. Israel decided enough was enough, that it was time to do everything possible to stamp out these implementers of terror.

The worldwide condemnation was immediate. The midnight oils burned at the United Nations as documents were prepared and meetings were held to determine ways to demand that Israel stop defending itself.

And even a popular Jewish television personality like Jon Stewart (born Jonathan Stuart Leibowitz) wonders aloud on national TV why politicians aren't allowed to criticize tiny Israel, a place surrounded by an angry, huge Arab world that is hellbent on driving it into the ocean.

As Stewart said, the entire Mideast situation is a mess. Of course it's complicated and nuanced.

But for me, things get pretty simple when I know that one side wants the other side dead.

Hamas, Hezbollah, and other Arab terror groups are committed to the destruction of Israel, a position supported by millions in the Muslim world.

All Israel wants to do is survive.

If Canada suddenly started raining rockets down on Buffalo, New York, I wonder if there would be worldwide condemnation over the United States' inevitable “disproportionate response.”

When I have guests on my radio show to discuss the Mideast, I often ask them why they believe so many liberal Americans don't have the wisdom to defend Israel.

Jackie Mason, one of the funniest people on the planet, told me he thinks it has something to do with liberals and Jews feeling oppressed and maligned and always longing for an underdog, and that they have somehow (stupidly) convinced themselves that the Palestinians are underdogs.

But perhaps the most astute observation came from Bill Gertz of the Washington Times. He believes that many American liberals, who have an utter contempt for the United States already, simply view Israel as a U.S. outpost in the Middle East. They resent the military might of our own country and they view Israel an extension of that dominance.

I think that's as good an explanation as I've ever heard.

Jon Stewart, and others like him, should be ashamed of themselves. No right-minded, clear-thinking American should waiver in supporting Israel in its current battle with Hamas.

Man up, Mr. Stewart, and do the right thing. You can still be Comedy Central's superstar if you do.

Perhaps you'll even sleep better at night. Unless, of course, your wife comes screaming into your bedroom.