Jesse Jackson Takes One For The Team 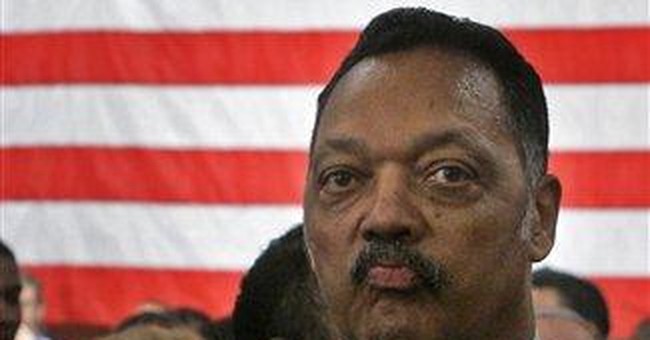 I've been giving Rev. Jesse Jackson's crude comments about wanting to rip Sen. Barack Obama's private parts off because he's been "talking down to black people" a lot of thought.

It's not that I enjoy paying much attention to Mr. Hymietown. I'd much rather revel in the reality that he's truly yesterday's news, a product of a bygone era of race-baiting, muckraking idiocy.

And while that's probably true, his comments in a Fox News Channel studio the other day catapulted him back into the media spotlight, one of his favorite places in the world. Jesse Jackson is a master of the old expression that it doesn't matter what someone says about you as long as they spell your name right.

By now, you've probably seen the video or heard the audio that features Jackson, in a creepy whisper, say to the man sitting next to him that he wants to turn Obama into a eunuch. He did so while sitting in a TV studio with an earpiece in his ear, a microphone clamped to his body, bright lights shining on him, and a camera staring into his face.

I smell a rat.

A media huckster like Jesse Jackson (it's hard to call the man "reverend" considering what he'd like to do to another man with a pair of garden shears) knows every one of the ins and outs of making a TV appearance. As a Fox News Channel contributor, I've learned most of the tips over the years: look into the camera like it's a good friend; pull your suit jacket down and sit on it so it doesn't bunch up; and most importantly: never, EVER say anything while sitting in that studio that you wouldn't want someone else to hear.

It doesn't matter if one is live on-air or sitting through a commercial break. There aren't any on or off switches on a lapel pin microphone; it is always "hot."

In fact, one standard form of communication when someone is doing a TV appearance like the one Jackson was doing Sunday morning on "Fox & Friends" is to chat with the producer who is sitting at his or her desk in the master control room in New York. That producer is constantly talking into your earpiece during the breaks, telling you what's coming up, who the anchor is, etc.

Do you really think Jesse Jackson doesn't know all of this? Believe me, he's had those kinds of conversations for many years.

So then we're left with a solitary, logical question: why would he purposely do such a thing?

The answer is painfully obvious. It helps Barack Obama.

Ever since this story first hit the news, pundits have been lining up to announce that this "gaffe" has helped Sen. Obama in a big way. According to Bloomberg.com, a professor at George Mason University, Mark Rozell, said that the Jackson comments help Obama by emphasizing his call for personal responsibility. Another professor, Steffen Schmidt of Iowa State University, said, "This helps Obama make the case that he's not a 'black' leader but just a Democratic candidate for president." And yet another college type, one Professor David Schultz of Hamline University in St. Paul, was quoted in the Bloomberg piece as saying, "Obama should give Jackson...an award for helping his campaign with white voters."

Is it possible that Jesse Jackson is such a media tramp that he'd actually fabricate a situation like this?

You'd better believe he is.

He may not like the fact that Obama has clearly distanced himself from the race-mongering "reverend." But I can promise you that Jesse Jackson isn't going to campaign on behalf of John McCain any time soon. As a self-described, self-proclaimed voice of black Americans, Jackson surely wants Obama to win. So this could have been a devious effort to get middle-of-the-roaders that he knows don't like him to feel better about voting for Obama in November.

For a man who admitted to spitting in white people's food when he was a young man in Greenville, South Carolina, I wouldn't put anything past him.

The final proof that I may be right came when Jackson's own son, Congressman Jesse Jackson, Jr., did some verbal castrating of his own. "I'm deeply outraged and disappointed in Rev. Jackson's reckless statements about Sen. Barack Obama," he said. "Rev. Jackson?" You mean dear old Dad? Do you think Jesse Jackson, Jr. would be a U.S. congressman were it not for his father?

I can't find a single instance where Jesse, Jr. ever ripped his father to shreds this way. Not one. Move over, Hillary. I think we've got a vast left-wing conspiracy going on here.

People who are desperate for Barack Obama to win the presidency are capable of practically anything. When I talk with callers to my radio show who are Obama supporters, there is a fervor and robot-like support that is chilling. They don't seem to care what Obama says, what he stands for (or doesn't stand for), or even that he can't seem to latch onto a consistent position on just about everything.

They just want him to win.

They need him to win.

And I'll bet the farm that if Jesse Jackson can score some votes for Obama by making a complete jackass out of himself on national TV, well, that's a small price to pay for a President Barack Obama.

Liberals React to Defeat of 'For the People Act'
Townhall
India Walton - 'a socialist, anti-police brutality organizer' - appears to have won the Dem primary for Buffalo mayor
Twitchy
Women Want to Know Why Men Don't Want to Marry Anymore...Allow Me
Redstate
The Morning Briefing: Progressives Are Having a Rough Time and It's Glorious
PJ Media