Mike Fuljenz
|
Posted: Aug 09, 2017 7:24 AM
Share   Tweet
The opinions expressed by columnists are their own and do not necessarily represent the views of Townhall.com. 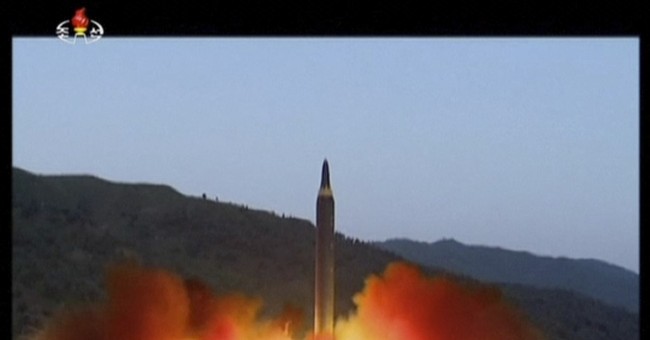 Gold hit a 6-week high of $1,274 last week (and silver reached $16.84) but both metals corrected on Friday when the dollar staged a surprise recovery.  The proximate cause was the U.S. dollar rally after a positive jobs report came out on Friday morning.  Gold traded at $1,268 at 8:30 am, right before the jobs report came out.  Gold fell to $1,254 by 10:00 am before rebounding. The U.S. Dollar Index rose over 1% on Friday at the same time gold fell by 1%.  The dollar has declined all year long, and there is a chance the dollar recovery will limit gold’s rise this year, but some unexpected international event could send gold soaring quickly – no matter what the dollar does – and such a moment may be brewing in North Korea.

On July 27, after the death of the 22-year-old American student Otto Warmbier due to torture by the North Korean government, the U.S. government announced a ban of all U.S. citizens traveling to North Korea, citing “mounting concerns over the serious risk of arrest and long-term detention.” That reason was a credible cover for keeping all American citizens out of harm’s way during any potential attack on the renegade North Koreans over their nuclear missile testing and capability of sending atomic bombs as far as the U.S. mainland.Earlier this year, President Trump thought he had gained some cooperation from the Chinese in limiting trade with North Korea and solving the problem locally, but China has since increased its trade with North Korea, a country whose only bordering nations are China and South Korea.

The U.S. travel ban will come into effect August 26.  It was published in the Federal Register July 27 with a 30-day lead time.  But right after the U.S. recalled U.S. tourists, North Korean dictator Kim Jong Un launched another ICBM test in a way which seemed to virtually dare the U.S. to intervene to stop them from further nuclear missile testing. Since China has shown no interest in disciplining its neighbor, a prudent U.S. military response would be either a military blockade of sea-born trade, or a pre-emptive strike.Such a move could send gold sharply higher, even if the U.S. dollar rallies as a “safe haven.”  Sharply higher gold prices have been the primary reason for past rare coin bull markets where prices rise 100% to 1000% in only a few years.  When gold rises sharply new customers contact coin dealers in droves and many new customers eventually end up buying rare coins.

I received an important national award at the recent World’s Fair of Money® for my decades of anti-counterfeiting efforts.

The Industry Council for Tangible Assets presented me with the Al Kreuzer Memorial Award medal for “outstanding contributions in the efforts to combat counterfeit coins and currency.”

I am a long-time member of the ICTA Board of Directors and a member of their recently-formed Anti-Counterfeiting Task Force. Since the 1980’s, I have taught many counterfeit detection and rare coin authentication seminars for collectors, dealers and law enforcement officers.

I received the prestigious PNG Sol Kaplan Award in 2016 in part for assisting an 84-year old man recover the $84,000 he had paid to two unscrupulous dealers who sold him counterfeit American Eagle gold coins. Earlier, I assisted a group of New Orleans physicians recover $750,000 after they unsuspectingly purchased counterfeit coins from a local attorney.  In both cases, the sellers were not members of leading dealer organizations.

I have been fortunate to receive major awards from the four top organizations in the rare coin hobby and profession: the American Numismatic Association (ANA), Numismatic Literary Guild (NLG), Professional Numismatists Guild (PNG) and the Industry Council for Tangible Assets and am the only coin dealer in this region of the country so honored.

Also during the week of the World’s Fair of Money, a nice, but not exceptionally toned, Lafayette dollar in PCGS MS-66+ CAC blew away the past sale record of $23,500 when it sold for $34,100.  Many tough to find Indian and $20 Liberty gold coins did likewise.