Mike Fuljenz
|
Posted: Mar 16, 2016 12:01 PM
Share   Tweet
The opinions expressed by columnists are their own and do not necessarily represent the views of Townhall.com. 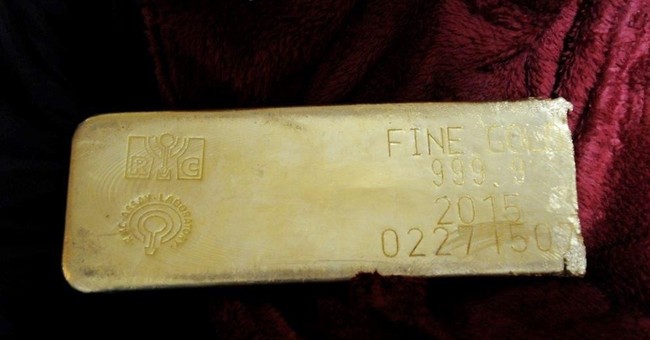 Gold topped $1280 last Thursday but then it dropped to $1250 on Friday. Every time gold has corrected this year, it has bottomed out at higher support levels, which form a new base for the next surge to a new 12-month high. The stock market has also rallied in the last month, but it is still down for the year to date, giving gold a 19.4% advantage over stocks so far in 2016. Investors are basically selling stocks or trading their low-yielding cash for gold, based on its long-term track record of beating every currency over time.

On Monday, March 17, 2008, gold surpassed $1,000 for the first time, reaching a closing price of $1,011 in London, partly due to the collapse of the brokerage firm Bear Stearns over the previous weekend. The U.S. Dollar index also reached a record low later in the month. Gold would not surpass $1,000 again until 18 months later, in September 2009, but gold has traded over $1,000 every day since October 1, 2009, much to the dismay of the bears who have been predicting that prices would eventually fall below $1,000.

Saint Patrick’s Day was also an important day for gold in American history. On March 17, 1862, the U.S. Treasury abandoned the gold standard by sanctioning the first two issues of Greenbacks, which were not tied to any promise of redemption in gold. As America entered its second year of a costly Civil War, both the North and South found it necessary to replace their scarce gold with cheap paper money. By war’s end, the Union printed $450 million in greenbacks. The natural result was runaway inflation by war’s end.

More recently, on March 17, 1968, during another costly war in Vietnam, the link between gold and the dollar was once again severed. In early 1968, LBJ’s “guns and butter” policies led to a hemorrhage of U.S. gold at $35 per ounce. On Sunday, March 17, the seven nations of the London Gold Pool agreed on a two-tiered gold price system. This was the first step toward an abandonment of gold and the free-floating of currencies in the early 1970s, leading to a long and costly bout of inflation that lasted until the 1980s.

The “Paper Gold” Market May Be Losing its Leadership Position

For years, we have noticed that the “paper gold” market (mostly exchange-traded funds and leveraged futures contracts) has been the “tail that wags the dog” in the gold market. After the advent of gold ETFs in 2004, paper gold investors pushed gold higher (and faster) than it would have otherwise risen in a physicals-only market. Likewise, the abrupt sales of gold ETFs, starting in April of 2013, pushed gold down faster and farther than it would otherwise have fallen. In recent months, however, the paper gold investors haven’t had the power or inclination to push gold back down. Attempts by some companies and traders to “short” gold have not been successful as gold continues to rise after these bear-raid assaults.

The primary reason why the paper gold traders are losing their leverage is that their inventories of gold have been run down so far that they can’t stage a major move against gold. London-based gold expert Lawrence Williams has said, “Western inventories of available gold are being run down to what might be considered dangerously low levels as gold moves from bank vaults in New York and London, and other repositories, indirectly to Asia (much via the Swiss refineries) where it tends to be much more strongly held. Next month, the Shanghai Gold Exchange is due to launch its own gold price benchmarking system (in Chinese yuan), which could further dilute the western bullion bank influence on price setting.”

The Chinese gold market has been rapidly maturing to become a powerful competitor to the traditional European markets and the New York futures and ETF markets, so Williams asks: “Can the bullion banks control the price of physical gold any longer once this begins to take a hold on Asian gold trade?”