Mike Davis
|
Posted: Nov 21, 2019 12:01 AM
Share   Tweet
The opinions expressed by columnists are their own and do not necessarily represent the views of Townhall.com. 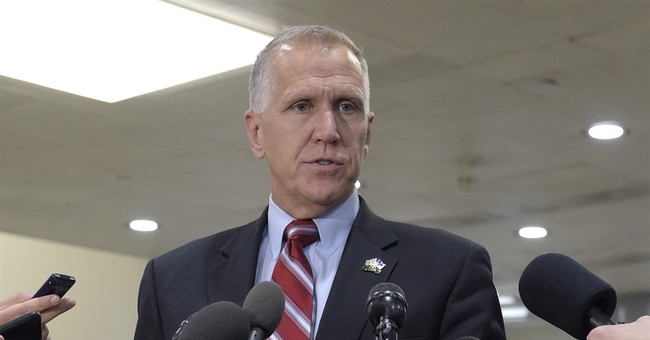 President Trump has accomplished many great things in less than three years in office. His longest-lasting legacy is his transformation of the federal judiciary through the lifetime appointment of judges in the mold of the late, great Supreme Court Justice Antonin Scalia. Justice Scalia understood a judge’s modest but critical job is to interpret the law as written (textualism) and commonly understood at the time of its enactment (originalism) -- rather than to improperly legislate from the bench and simply make it up to fit that judge’s political goals (liberal-judicial activism). The People, through their elected representatives, write our nation’s laws (Republic); not unelected, largely unaccountable federal judges, stealing power and masquerading as politicians in robes (tyranny).

Senator Thom Tillis (R-NC) understands this well, and he has been a key ally to President Trump in his transformation of the federal judiciary. Senator Tillis serves as a member of the influential Senate Judiciary Committee, the committee that is tasked with vetting and confirming the President’s judicial nominees. I served as the top nominations lawyer on the Senate Judiciary Committee this last Congress, including during the battle to confirm Justice Kavanaugh. I had the opportunity to work closely with Senator Tillis – and see firsthand how effective he is in helping President Trump place conservative judges on the federal bench.

So far, the Senate has confirmed 164 Article III judges nominated by President Trump. This includes Justices Gorsuch and Kavanaugh, along with 48 federal circuit judges (and counting) to the critically important federal courts of appeals. Senator Tillis helped President Trump shatter the all-time record for the number of federal circuit judges appointed at this point in any presidency. Senator Tillis has also helped President Trump solidify a conservative majority on the Supreme Court, flip the Second, Third, and Eleventh Circuit to majority Republican-appointed, build Republican-appointed control on the Seventh Circuit, and even significantly narrow the notoriously liberal Ninth Circuit from an 11-seat Democrat-appointed advantage to now just four — and soon to be just three.

With the continued strong leadership of Senator Tillis, President Trump could appoint well over 200 Article III judges before the end of his first term. Promises made; promises kept.

Senator Tillis played a key role in the fight to confirm Justice Kavanaugh. Senator Tillis did not bow to the liberal mob as they tried to destroy a good man with bogus allegations from almost four decades ago, when Justice Kavanaugh was a teenager. The radical left, including disgraced attorney Michael Avenatti and many Democrat senators, accused Justice Kavanaugh of helping lead a serial gang-rape ring in the suburbs of Washington D.C. when he was a high schooler. This was utter garbage.

Senator Tillis perfectly summed up the Kavanaugh confirmation process in a statement from September 2018: “For Democrats, this was never about supporting a fair process for Dr. Ford or Judge Kavanaugh; it was all about denying him a seat at the Supreme Court in order to fire up their base on the eve of an election. After taking no action for nearly two months, Democrats shamefully violated Dr. Ford’s request for privacy by leaking her letter to the media at the 11th hour and maligned Judge Kavanaugh’s character, proving they could care less about the collateral damage they created in their quest for campaign cash and votes.”

Thankfully, we had strong leaders like Senator Thom Tillis, who were willing to stand up for the American values of due process and the presumption of innocence -- as the liberal mob tried to destroy a good man. Justice Kavanaugh is on the bench in large part because of the hard work and strong leadership of Senator Tillis.

President Trump and his Republican allies in the Senate are winning. The Democrats are now desperately trying to catch up. They cannot seem to convince the American people of their ideas, win the presidency and the Senate, and pick judges through the American constitutional process. So, they are taking a different tact. The Democrat presidential wannabes will soon be rolling through North Carolina, pushing unconstitutional or otherwise radical assaults on judicial independence. Many of these liberals are seriously contemplating resurrecting long-ago discarded, radical schemes to pack the Supreme Court with left-wing justices, unconstitutional term limits on justices, and even impeachment schemes against Justice Kavanaugh. This is nothing short of a full-on assault on the independence of our judiciary -- and a transparent attempt to cow a new Supreme Court justice before he rules on key cases. Even nearly three years later, the Left still cannot accept the fact that Donald Trump – not Hillary Clinton -- won the presidency.

With Senator Tillis, North Carolinians will always have a senator who respects the Constitution and proper role of judges, something about which Republicans, Independents, and even right-thinking Democrats care about deeply. President Trump campaigned on the promise to transform the federal judiciary with the appointment of conservative judges – and he has delivered. Promises made; promises kept. Senator Tillis has been a key ally to President Trump in this judicial fight.

Mike Davis is the president of the Article III Project (A3P). He previously served as the chief counsel for nominations on the Senate Judiciary Committee for Chairman Sen. Chuck Grassley (R-IA). Davis also clerked for Supreme Court Justice Neil Gorsuch.