Mike Adams
|
Posted: Jun 29, 2017 12:01 AM
Share   Tweet
The opinions expressed by columnists are their own and do not necessarily represent the views of Townhall.com. 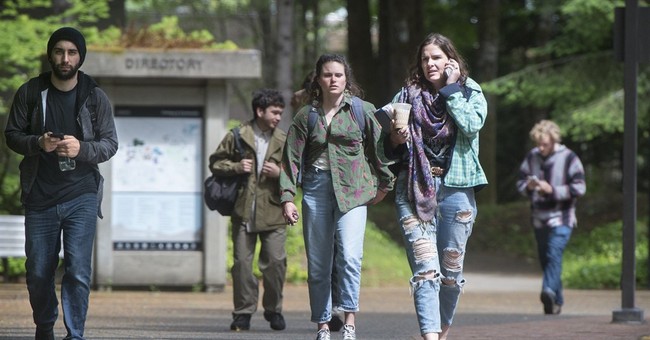 The University of North Carolina at Wilmington employed a former domestic terrorist for several decades and no one seemed to care. Dr. James Reeves was a member of the Weather Underground domestic terror group back in the 1960s. By the end of the decade, Reeves was charged with conspiracy to commit murder, promotion of anarchy, assault with intent to commit murder, and receiving stolen goods. He was indicted on charges of stealing a rifle and firing it into the Cambridge Police headquarters near the campus of Harvard University. When a witness recanted, the charges relating to the attack on the police station were dropped. But there were other convictions awaiting the future educator who had declared war on his own country.

Perhaps most notably, future Professor Reeves was actually convicted of committing an assault at a public high school. The conviction resulted in a jail sentence of three months. He was eventually convicted on other charges and went to prison for two years. After his release from prison, he became a father and decided it was best to leave the domestic terrorist life behind. He decided to pursue a career in higher education. Where else could a domestic terrorist get a job?

There was already a crack in the foundation of higher education in the 1970s - the decade during which universities started to hire former terrorists like Jimmy Reeves and Bill Ayers. The fact that a criminal conviction for engaging in acts of violence in a public high school did not keep Reeves from becoming a professor speaks volumes.

To their credit, Reeves and his fellow Weathermen did leave their violent ways behind when they became professors. But they brought more important weapons into their new chosen battlefield. They brought explosive ideas that would take more time to detonate than the pipe bombs they had constructed in the past. Among the most dangerous of the ideas the Weathermen advanced was "white skin privilege." It was first made popular when the terror group announced its war against the United States of "Amerikkka."

Although the Weather Underground was a fringe group, their views on race eventually leaked into the dominant culture. That only happened because they had strategically positioned themselves within the public universities. If anyone questions their influence on our universities, consider the following:

*In 2005, a North Carolina State University Professor named Kamau Kambon went on national television (a CSPAN lecture to students at Howard University) and argued for the global extermination of white people. His field of expertise was “Africana Studies.”

*The very next year, the Duke lacrosse team was subjected to a public lynching over a rape that never happened. Over 100 professors led the charge against the innocent students denouncing them for “white privilege” every step of the way. Some students joined forces with them demanding the castration of the innocents.

*More recently, at Duke Divinity School, Professor Paul Griffiths was charged with racial harassment for merely criticizing a “diversity” program run by bureaucrats at the Racial Equity Institute (REI). Unsurprisingly, the re-education program was centered on eradicating white privilege. The REI recommended reading list includes such titles as “White Awareness,” “White by Law,” “White Lies,” and “White Privilege.” In effect, Griffiths was charged with harassment for refusing to embrace anti-white propaganda at a school that claims to be Christian.

*After students at Evergreen State College recently demanded that all white people evacuate campus for a “day without white people,” Professor Brett Weinstein objected to their racism. He was predictably dubbed a racist. In fact, a mob of students disrupted his class, hurled obscenities at him, and then demanded his firing. Eventually, the entire campus was shut down when the students overtook the president’s office.

This obsessive anti-white racism is also now fully engrained in the curricula of schools all across America. In order to better indoctrinate students, the field of Whiteness Studies has emerged at scores of universities around America. Feminist Peggy McIntosh (author of the aforementioned book on “White Privilege”) teaches in this area. She describes white privilege as an “invisible knapsack of unearned assets which I can count on cashing in each day, but about which I was ‘meant’ to remain oblivious.” In other words, she is a pioneer in an entire academic discipline dedicated to proclaiming the worthlessness of white people.

Let the record show that students are all on board with this new racism. Even candidates for leadership of the Student Government Association at my school have actively campaigned on promises of eradicating white privilege from the campus. For these kids (who are mostly white) such self-flagellation is more like a religious ritual than a well thought out position on “social justice.”

Now that former Weatherman Jimmy Reeves has decided to retire from teaching, he will leave UNCW behind. He and his fellow Weathermen also leave behind a rich legacy to a new generation of self-proclaimed warriors marching under the banner of tolerance and diversity and destroying everything in their path.

The war on white privilege is nothing but an extension of the war on Amerikkka. Now that the enemy has enlisted your children it’s time to take notice.