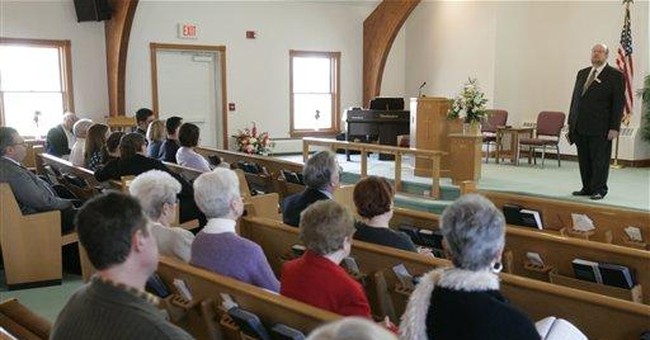 Last Sunday, I took a couple of guests to church. I just met Lisa back in March. But I’ve known her husband David for fifteen years – ever since he took my “intro” class at UNC-Wilmington. David just pleaded guilty to one count of receiving child pornography. In all likelihood, he’ll soon be sentenced to eight years in federal prison.

It was really awesome when David reached out to me in February wanting to hear more about my conversion to Christianity. It was far more awesome when he accepted Christ a few weeks later. Now, we’re working together – mostly doing radio shows – to warn people about the dangers of mainstream pornography. We try to warn people that it can lead to an acceptance of child pornography by gradual desensitization. We also tell people where they can go to get help.

But last Sunday at church I was slightly embarrassed in front of my guests. The source of my embarrassment was all of the women who came to the service dressed like they had been out at a bar. A lot of these women know that they can meet higher quality men at church than at a bar. But some don’t have enough sense to change clothes after making the transition from a bar to a church sanctuary.

One of the worst offenders was seated one row in front of us. She wasn’t like all of the other women who were content merely to show their breasts. She had to wear a dress that was thin enough to let the whole congregation know she wears thong underwear. It was even more disturbing than the 13-year olds who wear torn Daisy Dukes instead of wearing a bra.

When women come to church dressed like this they seldom stop to think that a recovering sex addict might be in the congregation. And they seldom stop to think that there are married men in the congregation who are struggling with lust issues. The church should be a place where men can come to seek help as they battle these temptations. It’s a shame that some of the temptations are following them into the church and pulling up a chair right beside them.

A few years ago, Tim, the (now retired) senior pastor at a local United Methodist Church did something I truly respected. During camp meeting month (August) he talked about why the congregation dresses casually and sings folksier songs during that month. But then, he turned toward a section of young women and reminded them that some people were dressing a little too casually throughout the rest of the year.

Mike, our senior pastor, did something similar in the summer of 2007. After finishing a series on life choices – one that focuses on sexual issues – he asked the women to help men who are struggling with lust. His concluding words – addressed to the ladies in the congregation – were pretty simple and straightforward: “Ladies, put on some clothes.” I’m paraphrasing but I’m sure Pastor Mike will agree that I’ve captured his point pretty accurately.

A few months ago, Pastor Mike made a similar remark about the way some women dress in church. Once again, he did the right thing. But too many of these ladies are simply not listening - and I use the term “ladies” rather loosely. So I think the church needs to adopt a more aggressive strategy.

One church – in, of all places, Long Island – adopted a strategy to deal with this issue many years ago. They started passing out shawls to women who came to church dressed inappropriately. The decision to ask women to cover their cleavage in church probably offended some of them. But it’s far better to offend a parishioner than it is to offend God.