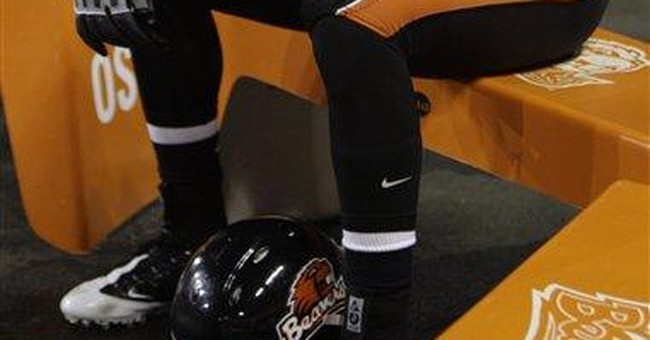 I've been in academia (Psychology) for 30 years.

Well, Dr. Douglas, this isn’t starting out very well. I read several posts you wrote in response to my recent column “How Jesse Helms Helped Promote Diversity” on TownHall.com. I noticed that you used “Dr. Douglas” as a screen name – boasting that you have a PhD. And, now, you are referring to me as “Mr. Adams” in an effort to establish some kind of intellectual superiority. I have no need to be called “Dr.” Can we just call each other by our first names? I’ve wanted to avoid the kind of childish insults I’ve seen from academic elitists over the last 25 years in academia – about 16 years as a professor, nine years as a student.

I am writing to protest, in the strongest possible terms, your dishonest and hateful columns that appear on Townhall.com. Just to focus on the most recent one, you seem to have made three arguments. I am working from memory so please forgive me if I misquote you.

Sure, I support your First Amendment rights, fully. But I must ask: If my column makes you feel so hateful, why do you keep logging on?

First, you claim that "leftist academics" have an "unmitigated southern bigotry". I consider this a lie. To prove that it is truthful, please provide me with some legitimate evidence (peer- reviewed) to support this claim. Also, please explain why academic "leftists" have supported the last three democratic presidents, all three of whom are clearly southerners (Clinton, Carter, Johnson). I find your statement to be an obvious, blatant lie.

Actually, I claimed that leftist academics that dislike Jesse Helms dislike him because of unmitigated anti-Southern bigotry. I don’t believe there are any peer-reviewed articles on the subject. The reason is simple: Peer-reviewed journals in the so-called social sciences will not publish any article that sheds light on academic leftist bigotry. That’s because the bigots control the journals. And the bigots are willing to vote for Southern Democrats because their anti-Republican bigotry is greater than their anti-Southern bigotry. I’d like to do a study on it but it would never be published. Would you be interested in doing such a study with me? Could we get it published using your superior academic reputation? And could we do a follow-up study on segregationist Southern Democrats who abandoned their segregationist stances as soon as they became Republicans?

Let me add a few observations. Leftist academics supported Johnson because he was a socialist, Carter because he was (and is) an anti-Semite, and Clinton because he supports the disproportionate murder of blacks under the excuse of “choice.”

Second, you claim that "communists are attracted to academia because of the tenure system" Again, this is an absurd, laughable lie. Please provide legitimate evidence supporting your claim. I've been in academia for 30 years, in two universities and I new [sic] of only one communist. Even if there really were all these communists, there's no way in the world you could possibly know their motivation for becoming academics.

Did you just actually say that there is no way one could ascertain evidence (“there’s no way in the world you could possible know”) of a person’s motivation to become a professor two sentences after asking for “legitimate evidence” of communists’ desire to become academics? I think we are all a little dumber after reading your last paragraph. Excuse the literalism but I see no “evidence” that you are familiar with the term “hyperbole.”

You are also misleading in your reference to the tenure system, suggesting that tenured professors can do whatever they want ("each according to their need"). This is again untrue.

Yes, I know that you hold the position that academics actually become more productive after they get tenure. You are the only person who has ever actually had the audacity to make that claim to me. You even posted the claim on the Town Hall discussion page. Then you were asked to provide the “evidence” by at least one reader. You did not do so. Are you “lying”? Are you telling “obvious, blatant lies” Dr. Professor Emeritus Douglas?

Note: I never said they can do “whatever they want” after they get tenure. If they convert to Christianity, there is hell to pay.

Another Note: The previous note was based on personal experience, not peer-reviewed “evidence.”

I won't even bother with your third line of argument. It's again dishonest, but not as ridiculous as the those [sic] described out [sic] above.

I’m not surprised you are ignoring point number three. That was the central thrust of the article and one that you cannot rebut. I did notice however that two academics logged on to say they had seen things just like I had described in point number three. It clearly is best that you ignore the issue of reverse discrimination in hiring in academia. To defend it would force you into telling “obvious, blatant lies.”

As a psychologist, I view you as a dishonest propagandist. Moreover, I think your aim is to inflame hatred in your readers. This is typical of the writing on Townhall.com, where so many of the articles are dishonest and inflammatory. It's all about choosing a target group (in your case academics), then lying and smearing them in various ways, with the goal of creating fear and hatred in your readers. Take a look at your comments. It would be very interesting to do a psychological analysis of Townhall's articles and comments, coding comments in terms of emotions such as fear, paranoia, anger, and hatred compared to happiness, empathy, etc. I consider it a hate site.

Yes, that would be an interesting study. Then we could compare two groups: Conservative posters and liberal posters, and see just who is more unhinged. Some responses to my articles have included “I’m going to come to your office and cut off your genitals” and “I’m going to douse your children with gasoline and light them.” Conservatives, no doubt!

You claim you are a Christian and yet you are dishonest and you facilitate hatred. If you had any integrity you would write corrections to your articles, apologize to your readers, and get back to being an academic.

I will certainly start with an apology. I am sorry, Dr. Professor Emeritus Douglas, PhD., that your efforts to make me look more hateful than you have backfired so badly. And you keep on writing me – something like four times today. Why do you have so much time on your hands? Do you have tenure? I have to go to class now.

I look forward to your reply (i.e., providing evidence for your dishonest, hateful claims).

Thanks. Today you have referred to me as “dishonest, hateful, stupid, idiotic, indecent, a propagandist, and a bigot.” Then, in another email you asked me to “please provide evidence” that gays are angrier than straights. Then at the end of the email you said “Do not respond.” Do you always ask people questions and then say “do not respond”? Does this mean you can’t handle the truth? And did you really think you could insult me repeatedly Dr. Professor Emeritus and demand that I not defend myself? What is your stance on Israel and Hamas? Is it “Take that rocket but don’t respond Jew boy!”?

Finally, you said via email that you “had a much better opinion of Christians before running into (me).” Really! You judge whole groups based upon encounters with one person? Isn’t that a form of bigotry? Are you uttering hate speech, Dr. Emeritus? Do you have a hate site?

I didn’t decide that psychology professors are nut jobs based on my encounters with you. I’ve been collecting evidence for years and I’d like to publish it. Do you know of any good journals, Dr.?